Rain is going to wash out most plans for the first half of this weekend, but I’m looking forward to a return of sunshine by Super Bowl Sunday.

First, a shameless plug – Saturday, February 5, is National Weatherperson’s Day. If you happen to cross paths with one, just remember that a token of appreciation is never a bad thing.

It’s Friday, which means that it’s time for your weekly drought update. Much of the portion of the state that had been previously cataloged as “abnormally dry” has been upgraded to the “moderate drought” category over the last two weeks, to the point where 55% of the state is now classified as such. 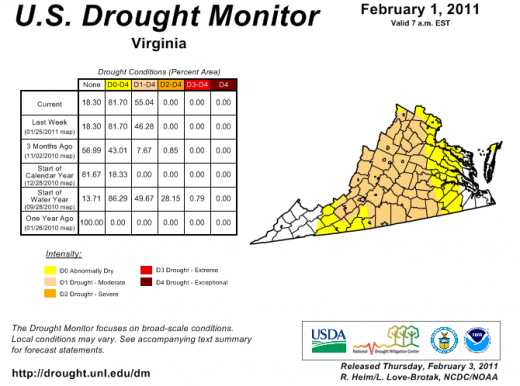 Since January 1, Richmond is only an inch short in terms of liquid precipitation for the year to date. Hopefully this weekend’s additional precipitation will make a larger dent in this value, and those areas that are considered to be in a moderate drought now will be reclassified lower before next week’s update.

We’re sitting on the eastern edge of an unsettled pattern in the upper levels of the atmosphere. An area of low pressure is centered over west Texas is the cause of a large divergence in the jet stream aloft; the two branches are currently converging over the Mid-Atlantic. An upper-air trough will develop over the next two days as the low moves east and flattens out.

Friday is looking mostly like a waiting game at this point. I’m looking at the possibility for some light scattered showers across the area through the day and evening hours tomorrow, as an area of moisture over North Carolina slowly works its way north, with partly to mostly cloudy skies otherwise. The cloudcover tomorrow will keep temperatures down, with highs only in the low 40s. The chances for rain showers will pick up into the overnight hours, as temperatures drop into the the mid 30s.

Saturday is looking like nothing but a total wash at this point. Rain will begin by sunrise and continue through most of the day, finally tapering off to a drizzle in the afternoon hours. Rainfall amounts should generally be less than half an inch, though some areas may be slightly higher. Temperatures will peak in the mid 40s before falling to near 30 overnight.

We finally start to see some improvement on Sunday, as the upper level system moves off to the east and out to sea. High pressure will build back in, bringing with it partly to mostly clear skies and warmer temperatures; we could see a high near 60 on Sunday depending on how much cloudcover remains during the midday hours. Nighttime lows are still cool, however, dipping back into the mid 30s Sunday night.

Next Thursday and Friday are looking like the likely targets for our next significant storm system. It’s a too early to settle on any specifics just yet, but I’ll be monitoring it for development over the next few days. I’ll have another forecast update up on Monday morning. Enjoy your weekend!