Rain is on its way into central Virginia, and cold air swings in behind for the second half of the week. If you’ve been anxiously awaiting the chill of December, your wait is almost over.

I suppose that you could drink it, but I can’t recommend it.

Heavy rain is draped across the western half of Virginia, stretching from the DC metro area all the way back to Bristol and the Cumberland Gap. 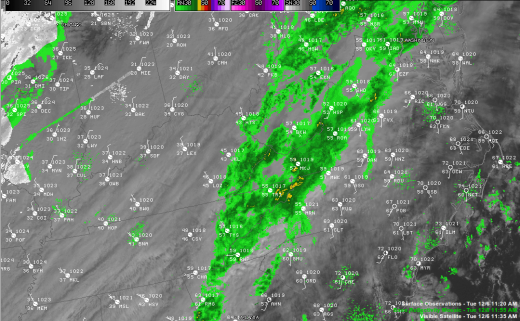 Before I dig into this, a disclaimer: I’m putting myself at a little bit of a disadvantage because I’m writing this before the morning runs of the international models have completed, so I’m relying on guidance from last night’s runs at this point. I’ll likely come back and revise this after these runs complete.

This forecast is far more complicated for my end of the state, where we’ve got a very real chance of snow Wednesday night and Thursday morning.

Tuesday: Some food for thought – it’s currently more than 20 degrees warmer in Boston (61) than Houston (39). The approaching cold front is packing quite the wallop. Temperatures have hit 70 this afternoon, and will stay mostly stationary as rain showers move in over the next few hours. Lows tonight will only fall into the upper 50s.

Wednesday: Temperatures peak near 65 in the afternoon, and then fall off rapidly as the cold front passes through the region that afternoon. Rain showers will continue to be constant through the day. Overnight lows will fall into the upper 30s overnight. If the precipitation is still hanging around late into the night, we may see some flakes or ice mix in for a period of time. Thanks to an area of low pressure developing along the Virginia/North Carolina coast, I think we’re definitely going to see precipitation late into the evening.

Thursday: The rain wraps up as the front and developing low pressure area slide off to the east and north, respectively, bringing what could be some of the coldest air of the season with it. We’ll struggle to reach 50 for a high on Thursday under partly cloudy skies as the rain tapers off in the morning hours. Continued clearing leads to a low near 30 Thursday night.

Highs will again try to hit 50 on Friday, and then get even colder on Saturday as another weak disturbance swings through. Expect to see some increases in cloudcover with this second disturbance over the weekend, and highs in the 40s and lows in the 20s.