Weather! Watching for snow this weekend?

After we get through the rain today, Friday and Saturday look like some pretty nice mid-February days. After that, there’s still lots of questions.

I’m going to caution you to temper your expectations right now. That said, some of the commentary coming from the National Weather Service, at both the local forecast office in Wakefield and the national Hydrometeorological Prediction Center, is painting a very interesting picture for this weekend. For me, it means a very challenging forecast.

Let’s jump in with both feet. Here’s the headline from the HPC’s Extended Forecast Discussion:

Counter this with the latest area forecast discussion from the National Weather Service forecasters in Wakefield.

AS THE SYSTEM MOVES AWAY OUT TO SEA SUN EVENG/NGT…COLDER AIR FILTERING IN FM THE N BEHIND THE LO…[could] CHANGE THE RAIN TO A MIX OF RAIN AND SNOW SHOWERS OR JUST SOME SNOW SHOWERS BEFORE ENDING. AT THIS TIME…IT STILL LOOKS AS IF THIS LO PRES SYSTEM MOVES TOO QUICKLY IN THE SRN STREAM AND OUT TO SEA TO ALLOW FOR ANY COLD AIR (LACK OF HI PRES TO THE N) TO BE IN PLACE FOR ANY POSSIBILITY OF SIGNIFICANT SNOW TO OCCUR.

After a number of days of waffling models, we’re starting to see some agreement about what to expect this weekend. An area of low pressure will develop along the Gulf of Mexico tomorrow, and then begin to track to the northeast, across the southern US and then intensifying near the Carolina coast Saturday and Sunday. It is, in some respects, a classic nor’easter setup. Now, that doesn’t mean we’re going to see a classic nor’easter. Rather than riding up the Eastern Seaboard, many of the models are taking the low farther out to sea once it leaves the Carolina and Virginia coastline.

This system’s proximity to the Gulf and the Atlantic means it will be carrying quite a bit of precip with it by the time it reaches Virginia.

However, the statement above in the Wakefield forecast discussion about a lack of cold air is very telling. There are still plenty of things that can and will work against any sort of significant snow accumulation across eastern Virginia.

First, and stop me if you’ve heard this one before, but while I’ve talked about the track in general, even small variations in the track will impact how much warm air is in the area as the low approaches and how much snowfall we see. A track further to the north and west means more warm air being pulled around the low and more warm air for us. The HPC’s map of model forecasts of the position of the low at 7am and 7pm Saturday (the area crudely circled in red by yours truly) revels how much uncertainty still exists – the exact position could still vary by several hundred miles at a certain point in time. Additionally, while models are great at resolving large areal features, there are many smaller processes that will ultimately go into how much snowfall 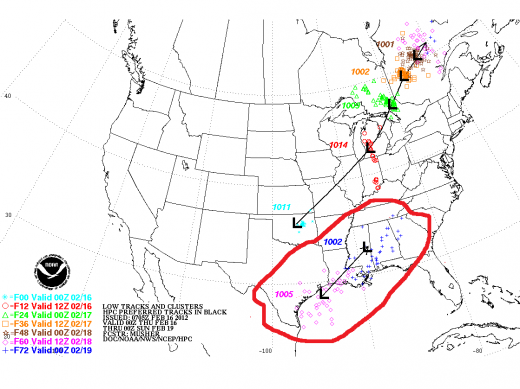 Forecast low positions from the HPC for 7am and 7pm Saturday (circled in red). Credit: NOAA/NWS/NCEP/HPC

While the track of the low will impact both how much cold air we get and how much precipitation we see, the bigger issue will be the lack of significant upper-level cold air, and to a lesser extent, the amount of dry air in place as the low approaches. Winds will shift to the northwest behind the cold front passing through today, which means that for Friday and a good part of Saturday, air will be flowing into central Virginia from off the Blue Ridge. This air will come down the eastern slopes of the mountains and across the Piedmont, warming as it drops in elevation (roughly 9 degrees Celsius per kilometer). As this air temperature increases, the amount of relative humidity will decrease, meaning it’s going to be rather dry by the time it reaches Richmond. Ultimately what this means for us is that a lot of the initial moisture that moves in ahead of the low will be lost to evaporation and cooling the lower atmosphere before we can even think about changing over to snow. By the time Sunday afternoon rolls around we’re looking more like we’ll be cold enough for snow, but a warm ground will aid in melting the first flakes that fall. It may take a moderate to heavy snowfall to overcome some of that melting.

The forecast for the rest of this week and this weekend, keeping in mind that there’s still a lot that can change with Sunday:

Thursday: Rain continues through this afternoon, and temperatures won’t climb much past the 50-degree mark we’ve already hit. The back edge of the rain shield is moving into far southwestern Virginia now; it should wrap up across central and eastern Virginia later this evening. Lingering clouds tonight will help temperatures stay a little warmer than they might be otherwise, with a low around 40.

Friday: Partly to mostly sunny skies return behind our cold front, which really isn’t ushering in that much cold air. In fact, we’re looking at temps that will run a little bit warmer than Thursday, reaching the mid 50s. Clearing continues on Friday as temperatures drop into the mid 30s overnight.

Saturday: We start off clear, but clouds from the approaching low will begin to build in through the second half of the day. Again, temperatures make it into the low 50s. Temperatures fall to near 40 overnight.

As for the onset of precipitation, I wouldn’t be worried about anything prior to early Sunday morning. I’m not ready to talk amounts just yet; but I’ll make sure to provide another update by Friday evening. While the models are starting to really come together to give us a good picture of the synoptic (large area) features, other mesoscale features aren’t as well-defined yet.