Weather! Thursday’s winter weather preview – up to 6” of snow possible

Update 10:30pm The area of the Winter Storm Warning has been expanded south and east to include Hampton and Newport News, as well as parts of the Middle Peninsula. It has also been delayed, and will now begin at 7am tomorrow. The warning will still expire at 7pm tomorrow. Their snow forecast has been updated […]

The area of the Winter Storm Warning has been expanded south and east to include Hampton and Newport News, as well as parts of the Middle Peninsula. It has also been delayed, and will now begin at 7am tomorrow. The warning will still expire at 7pm tomorrow. 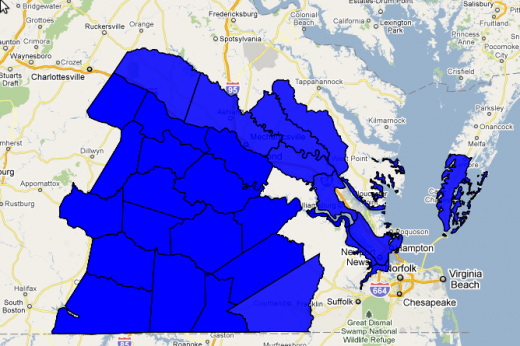 Their snow forecast has been updated to 3-6”. Up to one tenth of an inch of ice is still possible for far southern counties and cities near Hampton Roads and the North Carolina border. There is already some light sleet and snow falling across the mountains of western North Carolina. There are some light radar returns entering far southwest Virginia, but not much is hitting the ground just yet. It will continue spreading north and east overnight.

If you’re watching the radar, know that some saturation of the lower atmosphere will have to occur before precipitation starts hitting the ground. It’s likely that the early radar returns anyone sees over the area will evaporate before reaching the surface.

As expected, the Winter Storm Watch has been upgraded to a Winter Storm Warning for the counties in purple below, effective 4am Thursday through 7pm that evening.

A Winter Storm Watch means that significant amounts of snow, sleet and/or ice are possible and likely to make travel hazardous or impossible. The details of the forecast have not changed otherwise. 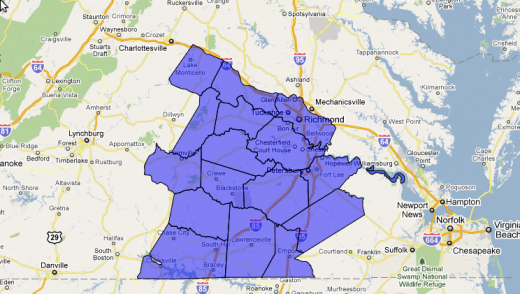 Let’s start with the current situation.

The National Weather Service in Wakefield has issued a Winter Storm Watch for the cities and counties below in white until 7pm Thursday evening. A Winter Storm Watch means that there is the potential for significant frozen precipitation accumulation that could impact travel.

It is likely that this watch will be upgraded to a Winter Storm Warning before the day is out; a Warning means that wintry precipitation (snow, sleet, ice) is imminent or already occurring and may pose a threat to travel, life, or property.

The system responsible for this event is a developing low over the Mississippi Valley. As this low develops overnight, it will track northeastward, and be located over southwestern Kentucky/northwestern Tennessee by tomorrow morning, and begin tracking eastward, moving off the Virginia coast by tomorrow night.

The current Winter Storm Watch includes a forecast for anywhere from 2” to 5” of snow by Thursday evening. The biggest question that remains is whether or not we see enough warm air to cause any changeover to sleet or freezing rain, and the last several model runs have suggested that most of the warm air will stay south of the Richmond region, and that this event will be mostly snow. If we can get enough moisture, then we may see as much as 6” from this system, but that’s on the high end; 3-5” is probably where we’ll wind up. There may be a little bit of sleet mixed in if the warm air makes it farther north.

Snow should start falling lightly near sunrise tomorrow morning, with the heaviest accumulation coming in the morning. It will begin to taper off in the mid-afternoon, though snow showers will continue through the evening commute, and tapering off completely after 7pm. By Friday morning, this system should be off the coast and out of the area. Road conditions will be hazardous for most of the day. If you go out, please remember to turn your lights on and clear your car off before you head out on the roads. Snow flying off your car is a hazard to others!

I’m also keeping an eye on the developing system that may pass through the area this weekend. I’ll have an update on that one by Friday.