I’m grateful that I haven’t received any flaming emails or flaming bags left on my doorstep after yesterday’s forecast (not that I’m inviting any of you to send them now). So what happened?

I’m grateful that I haven’t received any flaming emails or flaming bags left on my doorstep after yesterday’s forecast (not that I’m inviting any of you to send them now).

What happened? Basically, warm air aloft – at about 4500 feet – melted the snow as it fell. Surface temperatures were still in the 20s all day and overnight, meaning the now-liquid precipitation could again freeze before, and so what was supposed to be a mostly snow event turned into a combination snow/sleet event. Out here in Blacksburg, the warm air arrived much earlier in the day, and so we only saw snow until about 9:00, when it changed to sleet and then finally to freezing rain around 1:30 in the afternoon. Officially, Richmond tallied 2.0” of snow yesterday, bringing the total to 3.7” for the month. Accumulations were similar across most of eastern Virginia. 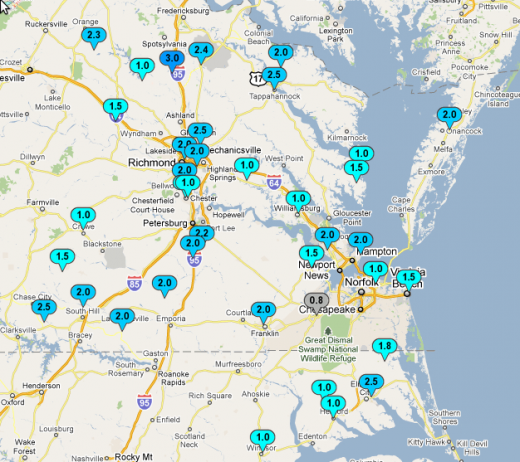 The visible satellite shows clear skies over Richmond this afternoon, and Friday highs have peaked in the mid 30s. Partly clear skies overnight and the snowpack will help low temperatures get down into the low 20s tonight. High pressure will be over the area on Saturday, and even though we’ll see some clouds across the area, highs will still make a run at 40. If temps make it to 40, it would be the first time in six days that’s happened. Lows Saturday night will drop into the mid 20s in advance of a developing low pressure system off the Virginia and North Carolina coasts.

As for Sunday, here’s where things get tricky. The GFS, one of the two major American models, and the ECMWF, the European model, have been at odds over what’s going to happen with this next system for most of the last week. The GFS has tried to to keep the system closer to the coast, meaning most of eastern Virginia would see some sort of snowfall. The ECMWF has trended farther out to sea, reducing the precipitation chances for the Richmond metro. Over the last 24 hours, the GFS and the other American models have come in line with the ECMWF, and Sunday’s snow event looks like a flurry producer at most. Like most coastal winter storms, track will play a VERY important part in determining final precipitation; if it forms closer than forecast, then we’ll see more snow.

Right now, it’s a bit of a stretch to even forecast an inch of snow for Richmond for Sunday, but I have very low confidence that we’ll even see that. Temperatures will climb into the mid 30s, which will keep any precipitation that falls during the warmest part of the day in liquid form, further reducing any snow totals. I wouldn’t be surprised to see some flakes on Sunday, but it’s certainly nothing to panic about. Lows Sunday night will fall back into the low 20s again.

I’ll be back on Monday with an early-week update and the possibility of yet another developing system early next week.