Weather! Things are looking up

First, some good news. River levels have dropped below flood stage and the flood warnings have been canceled.

First, some good news. River levels have dropped below flood stage and the flood warnings have been canceled. 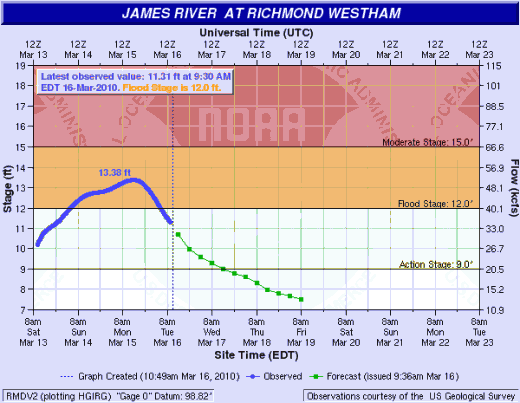 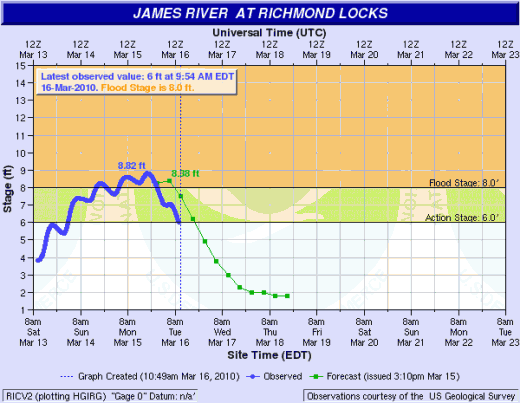 River levels are still quite high, and so if you do decide to go out on the river, please take some extra time and make sure that you’re safe. Until river levels drop below 9 feet at Westham, nobody is permitted on the river without a permit from the James River Park System. Life jackets are required to be worn by everybody on the river until the level drops below 5 feet.

If you were able to catch any photos of the flooding, submit them to the RVANews Flickr pool!

Second, more good news! The clouds are going to clear out beginning later today, and the rest of the week is looking pretty fabulous!

Tuesday
Low pressure has been meandering off the East Coast for several days now, bringing rain and thunderstorms to us over the weekend, and heavy wind and rain to the northeast from New Jersey to Massachusetts. The clouds are going to slowly clear out this afternoon, and sunshine will prevail in its stead. We’ll get to enjoy maybe a few hours of sun in the late afternoon and temperatures into the mid-50s, with clear skies tonight and lows in the upper 30s. Conditions will be slightly breezy until the low moves far enough away to keep the pressure gradients (and winds) to a minimum.

St. Patrick’s Day
It’s going to be a gorgeous day (and night) for doing whatever it is that you choose to do. You’ll enjoy clear skies and bright sunshine during the day, with temperatures maxing out in the mid 60s. Wednesday night will be clear and cool, with lows right around 40.

Thursday and Friday
High pressure is going to dominate for the rest of the week and into the weekend. Temperatures will climb into the 70s by Thursday and Friday, with cool evenings around 40 both nights. You can’t ask for better weather in March. Trust me, it can get much worse.