It’s 1am as I’m writing this and clogging up your Twitter feeds with reports of tornado warnings across southern Virginia tonight, and it’s currently 74 degrees at Richmond International. The average high temperature for today is 66 degrees. The story over the last 24 hours has been the rapidly deepening cyclone that intensified over Minnesota […]

It’s 1am as I’m writing this and clogging up your Twitter feeds with reports of tornado warnings across southern Virginia tonight, and it’s currently 74 degrees at Richmond International. The average high temperature for today is 66 degrees.

The story over the last 24 hours has been the rapidly deepening cyclone that intensified over Minnesota and Wisconsin. 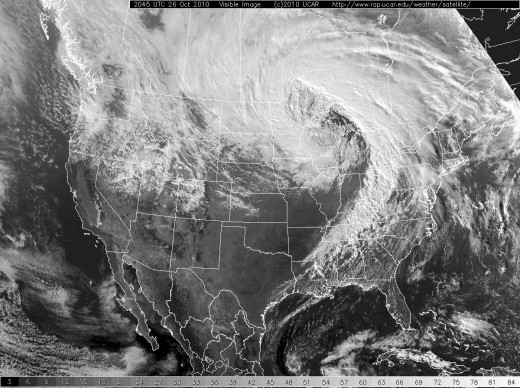 (Thanks to Patrick Marsh for posting this image.)

The central minimum pressure of this system plummeted to 955 millibars at Orr, Minnesota, unofficially setting the record for lowest pressure recorded in a non-tropical cyclone in the Lower 48. Dutch Harbor, Alaska, holds the record for the United States at 925 millibars, recorded in 1977. The central pressure of this storm is lower than both the storm that was responsible for sinking the SS Edmund Fitzgerald on Lake Superior in November 1975 and the March 1993 “Storm of the Century,” which dropped snow from Alabama along the East Coast to Quebec and Ontario.

This is an historic storm. A cold front extending outward from and rotating around the center of the low, which is currently over northern Minnesota, has been responsible for tornado warnings issued in states from Illinois east to Virginia and as far south as Georgia and Alabama. Strong to severe wind gusts have been recorded in at least as many states, and now the cold front is beginning to stall out across the Mid-Atlantic.

National Weather Service Doppler radar has indicated rotation on several storms near the VA/NC border through the overnight hours. A tornado watch that was previously in effect for the western half of the state has been replaced by a new watch in effect until 10 AM for Richmond, the Tri-Cities and points south and west.

Wednesday, as you can probably guess, will be an active weather day at times, as the front stalls out nearby. The conditions will be ripe for continued development of rotating thunderstorms, including the possibility for an isolated tornado. Damaging wind gusts will accompany most developing thunderstorms, in addition to torrential rain and lightning.

The warm and humid air that has been in place for the last couple days will stick around until the front finally clears the area, which means we’ll have plenty of fuel for storms in the meantime. Overall I’d plan on a day of mostly cloudy skies, with some breaks for sunshine and plenty of warm temperatures. Highs should reach into the low 80s, which on and off chances for rain showers and thunderstorms throughout the day. Overnight lows will drop to near 60, with the chance for rain and a possible thunderstorm after dark. Rainfall could approach 1” in some places with locally heavy downpours.

The cold front will move out of the area by Thursday , though the warm air sticks around for one final day. Partly to mostly sunny skies will persist, and temperatures will climb into the upper 70s to near 80. Lows Thursday night will drop into the mid 40s, as the cold air behind the front finally begins to filter into the region.

More seasonable temperatures are in store for the weekend, with an area of high pressure making for yet another sunny, fall-like weekend. I’ll have a weekend forecast on Friday morning.