Weather! Rough couple of days ahead

But once we survive these, there’s some gorgeous weather waiting for the latter half of this week and the weekend.

But once we survive these, there’s some gorgeous weather waiting for the latter half of this week and the weekend.

I’m writing this around 10:45 on Sunday night, where my attention is being taken up by reports of tornadoes across central North Carolina this evening, while heavy rain falls outside my West End apartment. It’s not unheard of for severe weather across the southeast in March; on March 28, 1932, an F2 tornado was confirmed in Goochland County.

A second video of a tornado in North Carolina on Sunday, taken on I-85 outside of Spencer, NC, which is located just northeast of Salisbury.
[youtube]http://www.youtube.com/watch?v=na5Y6bBnwb8[/youtube]

Here’s a radar image of the rainfall as it stands currently across Richmond. As you can see, there’s a line of heavy rain showers that stretches from northeast to southwest across Virginia, with Richmond lying on the eastern edge. 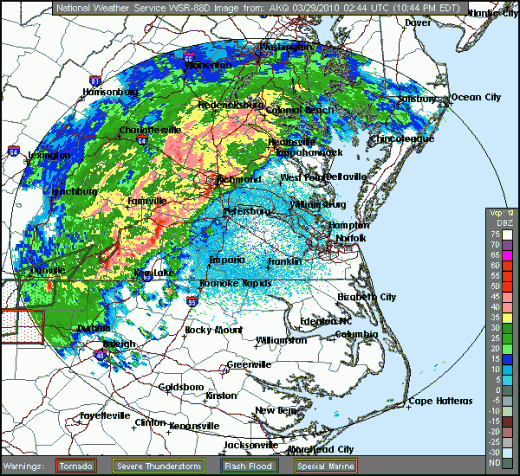 Here’s where I drop the cliche and say that it’s going to get worse before it gets better. Overnight Sunday night and into Monday, the rain band from Sunday night is slowly going to progress east, dumping quite a bit of rain in its wake. Rain is going to remain a problem through the day and into Monday evening, as the frontal system stalls out. Temperatures shouldn’t fluctuate too wildly; they will likely hover in the 50s for most of the day. Winds, however, will remain a nuisance, especially in the morning hours.

A low pressure system developing over Georgia and South Carolina is going to progress along the stalled front through Tuesday, taking the rain with it as it moves out to sea during the day Tuesday. There will still be a chance of showers, especially early in the morning, but as the day progresses only clouds should remain. Temperatures Tuesday morning will start out in the low 40s and top out near 60.

A warming trend begins in earnest for Wednesday, though lingering high clouds will keep conditions less than ideal. Light winds, temperatures in the mid 60s during the day and upper 40s in the evening. No real chances of rain on Wednesday, unless the low takes longer than expected to exit the coast.

If we can survive Monday and Tuesday, there’s a nice reward waiting for the end of the week, with clear, sunny skies and temperatures in the 70s and 80s (that’s not a typo!) for the latter part of the week and this weekend.