Rain threatens to put a damper on lots of weekend plans, but I don’t think all is lost. Despite the sogginess, some breaks in the rain showers and thunderstorms will create some opportunities to get outside this weekend.

Unfortunately, it’s looking like a soggy weekend in Richmond.

The Hydrometeorological Prediction Center precipitation forecast through 8am Monday.

The forecast from the Hydrometeorological Prediction Center for accumulated precipitation through Monday gives Richmond about an inch of rain total. This may fluctuate some as we go through the weekend, but should be enough to put another dent in the drought status that still pervades through southeastern Virginia. 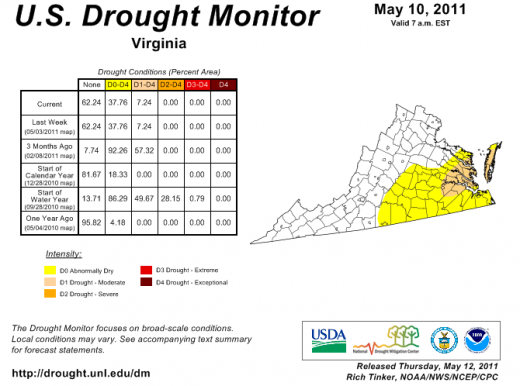 But all is not lost! While rain will be the predominant feature of this weekend’s weather, it will not be constant nor will it be continuous. If you’ve got major weekend outdoor plans, you might want to rethink them – or at least find a way to break them into smaller chunks so you can enjoy them in between rain showers.

Friday morning has already seen widespread cloudiness over eastern Virginia. Three are a handful of isolated storms farther west across the Piedmont and into the Appalachians this morning; some of those may encroach on the city this afternoon. While I’m generally thinking things will remain dry today, I can’t rule out a shower or two passing nearby. Today’s one of those days where you’ll be glad that you have an umbrella. Highs today will approach 70, but may be suppressed slightly by the cloudcover. Overnight lows tonight will only fall into the low 60s.

Squirrelcast (vs. Harrisburg, 7:05pm): Overcast skies and mild temperatures will be the story of tonight’s game, along with a chance of passing showers or an isolated thunderstorm. Expect game-time temperatures near 70, dropping into the mid 60s by the ninth inning.

Rain becomes more widespread, but still intermittent, on Saturday. Showers will be off and on through most of the day, possibly heavy at times, with widespread cloudiness persisting. The threat of thunderstorms will be pretty low, but it won’t be a great day for being outside. Keep an eye on the radar. Highs tomorrow will approach the upper 70s, with lows in the low 60s and intermittent rain through the evening hours.

Squirrelcast (vs. Harrisburg, 6:35pm): It’s going to be a damp evening, but hopefully the show will go on. Expect temps in the mid 70s at first pitch, dropping into the upper 60s by game’s end.

By Sunday, the winds shift to the southwest, allowing for some drier air to infiltrate and break up some of the clouds and rain. Some sun will peek through the clouds, allowing temperatures to get up to near 80 degrees. With plenty of moisture still in the air, increasing sunshine also increases the threat that there will be thunderstorms embedded with any rain showers across the region. Any areas with heavy rainfall may also see a flash flooding threat with periods of continued heavy rain. Be alert and don’t drive across flooded roadways. Overnight lows again will fall into the low 60s.

Squirrelcast (vs. Harrisburg, 2:05pm): While Sunday will be an improvement over the rest of the weekend, the chance for lingering showers and thunderstorms is still fairly high. However, breaks in the clouds and some additional sunshine means that it should be a pleasant afternoon for baseball. Plan on game-time temperatures in the upper 70s and low 80s through the entire afternoon.

The rain chances will continue well into the early part of the week. My forecasts are again going on hiatus while I’m out on the Plains chasing storms, but they’ll pick up again as soon as I get back. Enjoy your weekend!