Weather! Rain, rain, on the way

First, let’s talk about how much we need it. We ended Thursday with a rainfall deficit of 2.69”, which continues with last year’s track record, where we ended the year down just over 8” from average. In fact, we haven’t been above the average rainfall mark at any point in the year since around May […]

First, let’s talk about how much we need it. We ended Thursday with a rainfall deficit of 2.69”, which continues with last year’s track record, where we ended the year down just over 8” from average. In fact, we haven’t been above the average rainfall mark at any point in the year since around May 2, 2010. It’s been a while, folks, and we need the rain.

The US Drought Monitor shows that only about 2% of Virginia isn’t in some sort of drought status, and that’s on the eastern shore, where they’ve picked up some of that snow that Richmond has missed this winter. 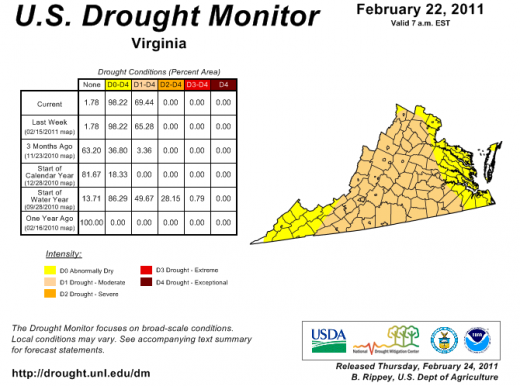 As of 9am, Richmond International has picked up 0.53” of rain, as the strongest area of rain has just passed through the airport region. 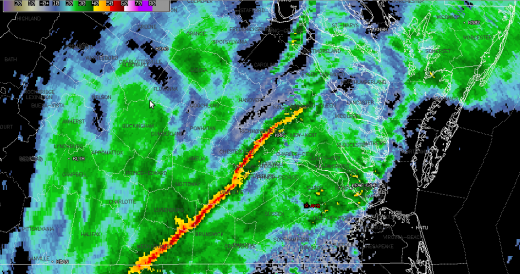 That area of bright red and orange is what’s left of a squall line that moved across the deep South beginning yesterday afternoon, several tornado reports and causing wind damage from northwest Louisiana all the way to southeast Kentucky and western Georgia. It’s going to exit the coast this morning, but not before bringing the risk of severe weather, including the possibility of a small tornado or two, to the Northern Neck, the northern two-thirds of the Delmarva, and parts of the Delaware Valley. To that end, the Storm Prediction Center has highlighted this area as one of a slight risk for severe weather today.

So now that the heaviest rain has moved past Richmond, what’s in store for the rest of Friday? First, the National Weather Service has placed the entire region under a wind advisory beginning at 11 this morning, lasting through 8 this evening. Winds are expected to remain sustained between 20 and 35 miles per hour, changing from the south to the west this afternoon as a cold front approaches and passes across Virginia. Temperatures will peak in the upper 60s today before dropping sharply this evening after the front passes, finally landing near 30 overnight. Lighter rain will continue through the remainder of the morning, and I can’t rule out the possibility of some additional rain/thunderstorm development this afternoon in advance of the cold front. We may see some clearing after the front passes, but generally the remainder of the day should be partly to mostly cloudy. Expect continued power outages through the day until the winds subside.

Saturday will see an improvement in conditions but cooler high temperatures. High pressure will move in behind the cold front, keeping skies partly to mostly clear through the weekend. Highs, however, will only reach the low 50s during the day Saturday, falling back into the low 30s overnight. The passage of a warm front Sunday will allow temperatures to climb back into the low 60s during the day with continued partly sunny conditions, and overnight lows Sunday night in the mid 40s.

We’re going to have another opportunity to make a dent in the rainfall deficit come Monday, where we could be looking at up to another half inch of rain along with another round of some pretty strong winds. March, it seems, may spend another year coming in like a lion.