While we’ve got some gorgeous weather early this week, communities across the state are picking up the pieces following severe weather this weekend. Flood warnings are also in effect for the James River at both points in the city.

My thoughts this morning are with all those affected by storms across Virginia and the mid-Atlantic this weekend. As of this writing, four tornadoes have been confirmed across the Commonwealth, and 5 people have lost their lives from storms this weekend, including a woman and 8 year-old child who tried to cross a flash-flood-covered bridge. I’ve got a recap of damage reports and photographs in another post.

I’m a little behind in posting this, but thanks to the Capital Weather Gang for sharing this. The improv troupe 12 Angry Mascots put together this spoof video of sports talk radio using — wait for it — weather talk radio. Enjoy.

Unfortunately, this weekend’s rains have sent the James climbing towards – and out of – its banks yet again. Flood warnings are in effect for the James River at both Richmond-Westham and City Locks until further notice. 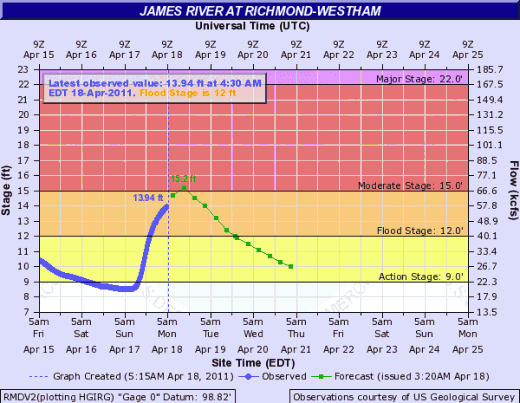 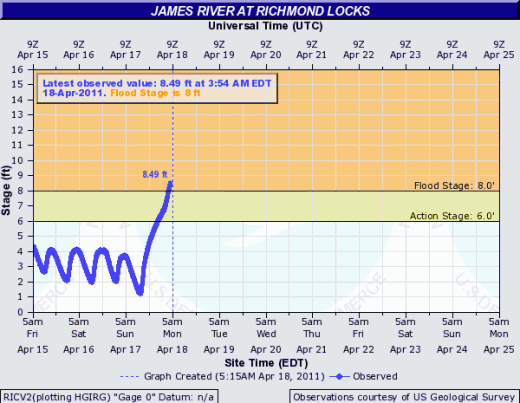 Sunday’s tranquil weather was an excellent preview of what to expect for the early portion of this week. We’ve got some lingering clouds early Monday morning, and while some will continue to linger through the day today, we’re looking at quite a nice day ahead. Highs today will climb into the low 80s. Lows tonight will drop into the low 60s.

Tuesday will be almost a virtual repeat, only with some additional cloudiness during the day. Highs again will be in the low 80s, with lows in the lower 60s. The possibility exists for some isolated popup showers and thunderstorms later in the day.

Looking ahead, Wednesday night looks like our next chance for thunderstorms and possibly severe weather as another cold front swings through the region. I’ll have an update Wednesday morning.