Weather! One more day of heat

The heat and humidity stick around for Monday; it’s already 84 at 9am, and the dewpoint is sitting at a muggy 68. High pressure is firmly in control through the day today, keeping skies mostly clear and sending temperatures soaring well into the 90s.

It’s been an active weather weekend, both in and out of Richmond.

Sunday marked the 59th anniversary of the last major tornado to cut through or near downtown Richmond. The Byrd Park Tornado, rated an F3 on the Fujita scale at the time, touched down just south of the park, cut a damage path through the Fan and across the VCU/Monroe Park area, before crossing Broad Street, clipping Jackson Ward and dissipating in Northside near Brookland Park Boulevard.

Both Boulevardizen and the VCU Library both have retrospectives of the tornado. 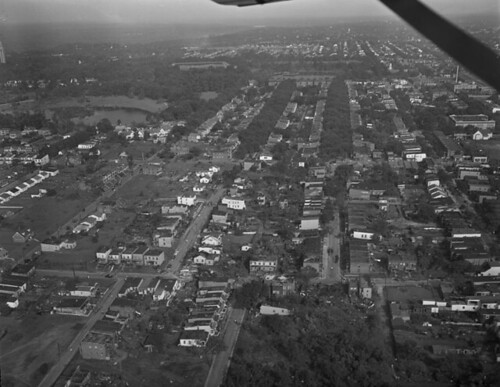 Sunday was also the hottest day of the year so far in Richmond; the high of 97 fell one short of the day’s record of 98. Humidity, and therefore heat index values, were both very high on Sunday as well. At the peak of the day, we saw a heat index of 103 degrees. Now’s a good time to remember the dangers of prolonged heat exposure: according to the National Weather Service, heat kills more people per year than floods, tornadoes, lightning and tornadoes put together. Take a minute and review this information put together by the NWS about preparing for and responding to dangerous heat events.

In the meantime, the tropical Atlantic is beginning to churn. The National Hurricane Center began watching an area of disturbed weather located 1425 miles east-southeast of the Windward Islands on Saturday. The area, currently dubbed Invest 92L, has been given a 60% chance to develop into our first Atlantic tropical depression of the season in the next 48 hours. Conditions are currently favorable for development until the system gets closer to the Lesser Antilles. It’s too early to tell what direct impacts we’ll see, but it is a system that bears watching in the short term. More information on the system is available at the National Hurricane Center website.

A little closer to home, we weren’t the only one seeing some thunderstorm-related excitement this weekend. The Virginia Tech storm chase team encountered a tornado in the Oklahoma panhandle this weekend. There’s a beautiful photo one of their chasers nabbed along with a brief summary of their Sunday excursion.

And finally, on a slight more tragic note, here’s the review of the flash flooding event in Arkansas from the NWS office in Little Rock. To this point, the event has claimed 19 lives in an area where notice either came too late or not at all, as the Little Missouri River rose over 18 feet in three hours. If you’ve got your own plans for outdoor adventures, make sure you’re not only aware of the weather, but have some way to get notice in the event of an emergency.

As for Richmond, the situation here for the next two days is much calmer. The heat and humidity stick around for Monday; it’s already 84 at 9am, and the dewpoint is sitting at a muggy 68. High pressure is firmly in control through the day today, keeping skies mostly clear and sending temperatures soaring well into the 90s. I doubt we’ll get to today’s record of 99, but 95 certainly isn’t out of the question. A system approaches the region tonight, increasing the risk for showers and thunderstorms into the later part of the evening. Lows tonight fall into the low 70s.

A cold front passes through overnight, breaking some of the heat on Tuesday. Increasing cloudcover will help hold temperatures down; Tuesday highs should only top out in the mid 80s. There’s still a small rain threat through the evening associated with the cold front, but overall the region should stay dry. Low temperatures Tuesday night fall into the upper 60s.

Tuesday Squirrelcast (7:05pm, vs. Binghamton): There’s a small chance of rain through the evening, but overall, it should be a comfortable evening at the ballpark. First pitch temperature should be in the upper 70s, falling into the low 70s by the 9th inning.

The pattern looks a little more unsettled heading into Wednesday. I’ll have an update on the tropics and a new forecast then.