Richmond’s got a (long) shot at another record high today, but an approaching cold front from the west will put the brakes on any more heat headed into the middle of the week. Plus, more Squirrelcasts!

Like John Mayer, we’re waiting on the world to change, but just not in the same way.

The visible satellite image tells the story this morning – lots of clouds still hanging out over eastern and central Virginia. If you look hard enough – up towards the Shenandoah Valley – you can see some fog still embedded in some of the valleys this morning. 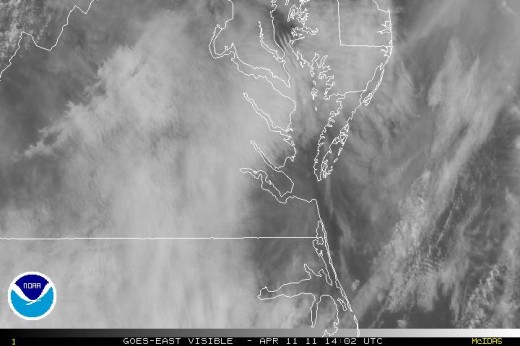 As these stratus clouds burn off this morning, temperatures will start to soar. Monday‘s record high is 92 degrees, and while I don’t think we’ll quite make it, we’ll come close. Plan on highs in the upper 80s, especially if the stratus deck that’s blanketed the region this morning burns off sooner rather than later. We’ve made significant progress over the last hour or so, and I expect most of the remainder to be gone by lunch time. Southwest winds this afternoon will bring plenty of heat and a healthy dose of humidity along with it.

“We’ve secretly replaced Richmond’s comfortable spring weather with the heat and humidity of mid-summer. Let’s see if anyone notices the difference.”

Aside from some partly cloudy skies, today will remain relatively quiet. Lows tonight will fall into the low 60s.

Squirrelcast (vs. Bowie, 6:35pm): Another fabulous night for baseball! Who could ask for anything more? Game-time temperatures will be in the low 80s, dropping to the low 70s by the end of the game. Expect partly cloudy skies with a light breeze from the southwest, and hopefully another Squirrels win!

A frontal boundary approaching from the west muddies the picture a bit for Tuesday. The Storm Prediction Center has highlighted a possible chance for some brief storms or heavy rain showers in the morning and afternoon, followed by cooler temperatures compared to Monday. What does develop will likely be fast-moving, and include the threat for damaging winds and brief, heavy rain showers. The current expectation is that these will clear off to the east by the evening commute, allowing conditions to improve slightly through the evening from mostly to partly cloudy. Plan on highs in the mid 70s, dropping into the mid 40s overnight after the front passes through.

Squirrelcast (vs. Bowie, 6:35pm): It’s looking like the rain and thunderstorms will clear out prior to the start of the game. If there’s a change in the timing of these storms to later in the day, you may see a delayed start to the game. I don’t think we’ll see enough precipitation in the evening for a rain-out, but it’s not out of the realm of possibility. It’s going to be a cool night at the ballpark, with game-time temperatures likely in the mid 60s around first pitch, and cooling into the upper 50s by the ninth inning.

I’m watching the chances for some more rain on Wednesday – think about backup plans if you’re going to Wednesday morning’s Squirrels game – and even cooler temperatures, before high pressure comes back to clear things up later in the week. I’ll have another update by Wednesday morning.