We’ve either tied or set record high temperatures for the last two days. Monday’s high of 89 tied the record set in 1942, and Tuesday’s high of 93 surpassed the daily record of 92, also set in 1942.

We’ve either tied or set record high temperatures for the last two days. Monday’s high of 89 tied the record set in 1942, and Tuesday’s high of 93 surpassed the daily record of 92, also set in 1942. Tuesday also marked the earliest 90-degree day in a year since 1963, when April 3 marked the first 90-degree day of the year. The earliest 90-degree day on record occurred on March 17, 1945, when Richmond topped out at 91 degrees. Additionally, the stretch from April 1 to 6 this year has marked six straight days before April 15 of 80-plus degree temperatures. The record is seven consecutive days, which was set back in March 1990.

If it’s any consolation, Richmond, my good friend in Seattle is quite bitter that we are enjoying these early summer days. There’s always someone just as unhappy about their weather as we are about ours.

Wednesday looks to be a continuation of the previous two days. Clear skies, reasonable humidity and breezy winds will make for another day in vicinity of 90 degrees. Wednesday’s high is 94, so we likely won’t set another record, but we’ll come precariously close. I’m confident we’ll extend that 80+ streak to seven days, possibly before noon. Other than that, it’s going to be a quiet, hot, slightly sticky, pollen-filled day. Enjoy it, and please don’t sneeze on me! Lows Wednesday night will drop back into the mid 60s,

As I alluded to on Twitter on Tuesday, if you’re thinking about heading down to the river to escape the heat, please be careful. The river is still quite high, even with the lack of precipitation, and life jackets are required as long as the river is over 5 feet at the Westham gauge. 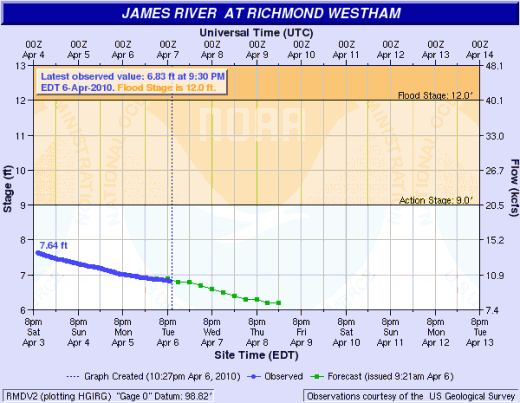 The pattern finally begins to change on Thursday. Clouds will begin appear in advance of a cold front in the afternoon, as rain chances go up into the evening hours. There’s the possibility for some thunderstorms as this cold airmass slams into the hot, dry airmass that’s currently in place. The Storm Prediction Center is still pretty torn about what’s going to transpire on Thursday and they haven’t issued any sort of severe weather forecast for the region, but it’s one thing I’ll be keeping an eye on as Wednesday progresses. Temperatures will still approach 80, despite the cloud cover, giving us a shot at 8 consecutive days above 80 degrees. Once the rain moves in, temperatures will moderate some, falling back to near average for this time of year. We should bottom out around 50 Thursday night.

Behind the cold front on Friday, we get more seasonable weather – actually, below average – as cold air settles in. Clouds will continue to linger behind the front into the day on Friday, with temperatures only rebounding slightly from Thursday night’s lows. Friday’s high will land just below average for the day, in the low 60s. Friday night is looking downright chilly, with lows near 40. It should be quite the shock after the last few days.

Temperatures look like they will start to rebound over the weekend, as high pressure takes control yet again. I’ll post another update before the weekend.