Let’s talk about you and me…specifically, the chances of winter precipitation Monday night and Tuesday. Truthfully, most of the precipitation we’re going to see Monday and Tuesday will be liquid in nature.

Let’s talk about you and me…specifically, the chances of winter precipitation Monday night and Tuesday.

But first things first, thanks to Bill Dickinson, who provided me with this photo from our last snow event. 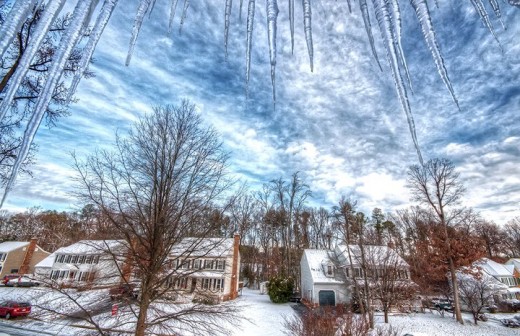 Truthfully, most of the precipitation we’re going to see Monday and Tuesday will be liquid in nature. Clouds will begin to thicken through the day on Monday as an area of low pressure develops tonight off the coast of the Carolinas. Highs today will reach to near 40, and stick there through the evening hours as the precipitation picks up around and after the evening commute. For those of you that have to go to work today, you can at least take some solace in the fact that you’re only sharing the roads with those that don’t have today off. Temperatures overnight will dip into the upper 30s as the rain intensifies into the early morning hours. At this point, it looks like most of the chances for ice will be both minimal and north of the city; however, don’t be surprised if you see a few ice pellets into the evening. Enough warm air will be in place as the low develops to quickly wipe out any remaining ice not long after it begins.

As for Tuesday, the best word I can use to describe it is “wet.” Rain will continue for most of the day, finally tapering off Tuesday evening as the low moves off to the north. Temperatures will climb into the mid 40s during the day, before dropping into the upper 30s overnight.

Temperatures will climb back to near 50 by midweek, before cooling again. The models have a pretty wide range of disagreement, but are strongly hinting at another opportunity at some winter precipitation from Friday into the weekend. I’ll have another update on Wednesday.