Beginning Thursday, the heat is finally going to drop back to something slightly more reasonable for this time of year.

Yesterday’s high temperature of 104 not only broke the record for the day, it also marked the sixth day of 100+ degree temperatures we’ve seen this year. It also marks only the fifth time in the history of Richmond weather observations (which date back to 1897) that we’ve hit 104. The all-time high temperature for Richmond is 107, recorded in August 1918. We’ve also hit 105 and 106 once each, in 1944 and 1918, respectively.

One negative consequence of the beautiful weather the last few weeks has been the lack of rain. The latest update to the US Drought Monitor was released this morning, and it paints a very telling picture of the drought status across the state. 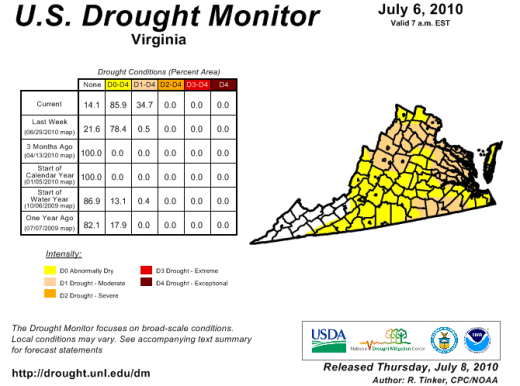 Most of the eastern 2/3 of the state is now at least in an area of Abnormally Dry conditions. Several areas, including the Shenandoah Valley, parts of southside Virginia, and the Richmond metro region and western shore of the Chesapeake Bay are now into the first stage of actual drought. Currently we’re over 4.50” short on rain for the year.

In the tropics, Tropical Depression Two formed in the Gulf of Mexico Wednesday evening. It has followed a very similar track to Hurricane Alex as it made landfall. Originally there were some thoughts that it would have time to develop into Tropical Storm Bonnie before making landfall, but the official NHC forecast keeps it as a Tropical Depression as it approaches the south Texas coast, bringing several more inches of rain to a region that saw plenty of rain from Alex as it came onshore.

Beginning Thursday, the heat is finally going to drop back to something slightly more reasonable for this time of year. An area of low pressure is approaching the coast from the Atlantic. The system is already bringing some increased moisture to the area, which is sending dewpoints higher and creating clouds that are keeping the temperatures lower. We’re still going to get into the mid 90s today, with a very small chance of some afternoon and evening thunderstorms. Lows tonight will fall into the lower 70s.

On Friday, we’ll cool off a little more as the low gets closer and as a cold front draped across the midwest approaches Richmond from the west. We’ll see more partly cloudy skies, with temperatures in the low 90s and high humidity levels. There’s another small chance of some afternoon showers and thunderstorms again. Lows Friday night again fall into the low 70s.

There’s a chance of some more showers and storms on Saturday. I’ll have a full update Friday evening.