Thursday marked the tenth day of 100-plus temperatures this year, setting the record for most 100-degree days in a single year. Plus, a storm blew through town with 40 mile per hour winds. It was quite a day.

The latest update of the US Drought Monitor was released Thursday morning. Almost 15% of the state, mostly across the Northern Neck and Eastern Shore and parts of south-central Virginia are under severe drought conditions. 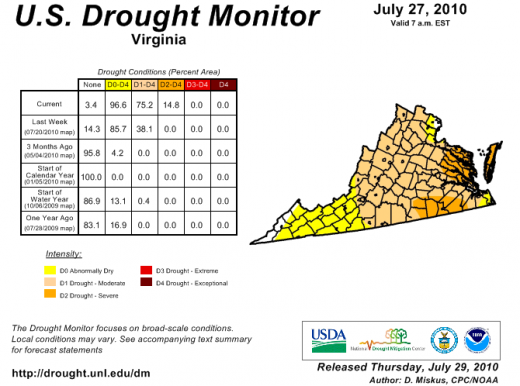 The likely effects of a region under severe drought include crop or pasture losses, high risk for wildfires, and water shortages and possible imposition of mandatory restrictions. Richmond is still under a moderate drought, short 6.53” as of Monday when the data was submitted to the Drought Monitor. By Wednesday, this deficit had grown to 6.80”.

The National Hurricane Center is monitoring two disturbances developing in the Intertropical Convergence Zone. Invest 90L, identified as area 2 in the image below, is currently being forecast by several of the major tropical forecast models to develop into a hurricane in the Atlantic within the next 96 hours. It’s likely that the models that develop this system into a hurricane in the next few days are likely being over-aggressive, but regardless, these are both areas that require monitoring over the next few days.

These are all still very much stories in their own right, but they’re overshadowed by the line of storms that blew through the Richmond metro area Thursday evening. Triggered by plenty of heat and moisture in the region, the storms swept across the region in an hour, bringing localized hail and wind gusts likely in excess of 40 to 50 miles per hour. Trees were knocked over from Wyndham to downtown Richmond, knocking out power to tens of thousands. As of 1:00 AM, Dominion Virginia Power is still reporting more than 19,000 people without power in Richmond and the Tri-Cities. Lighting strikes sparked several fires across the West End, including the Virginia Dental Association building on Staples Mill Road.

The Times-Dispatch compiled this map showing a sampling of the damage reports they received.

This map shows the storm reports made to the National Weather Service during the time frame for all of eastern Virginia. Three tornado warnings were issued, one for York County and two over Norfolk and Virginia Beach for funnel clouds that had been sighted. No tornadoes were reported to have touched down, thankfully. However, parts of Tidewater received more than four inches of rain. Twitter user Lee Costic pointed out that Norfolk’s rain total for the day of 4.65” beat the total rainfall that Richmond has seen over the last three months.

Here’s the storm total rainfall product from the Wakefield radar. Rather than showing live reflectivity values, this product uses the reflectivity picked up by the radar to calculate an estimated rainfall total for the duration of an event. 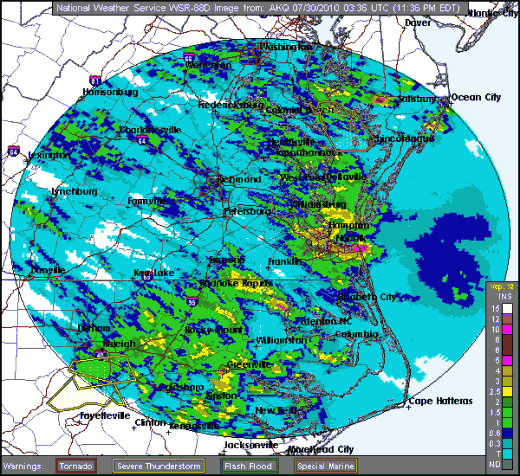 Just about everywhere in the region saw at least a trace of rain. The lighter green areas denote at least an inch of rain, while the dark green indicates rainfall in excess of 2 inches. Those small areas of red mark estimated rainfall totals in excess of 5 inches.

Finally, here are some damage photos from tonight. 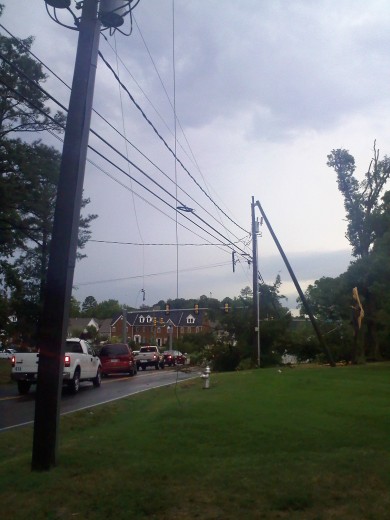 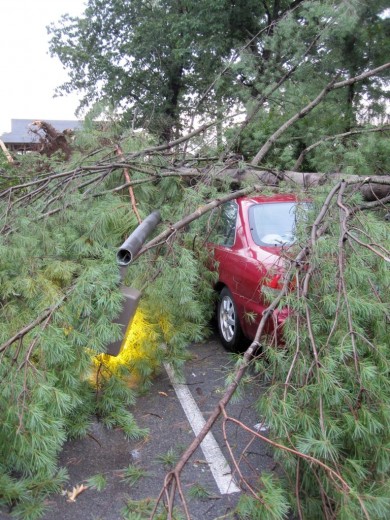 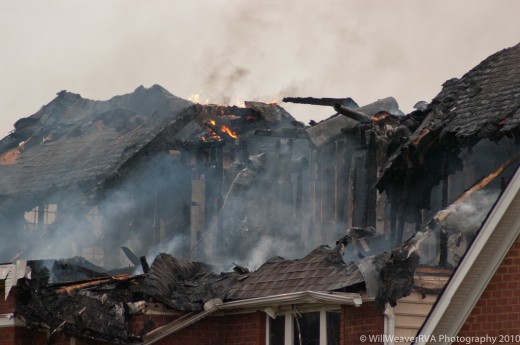 The aftermath of a house fire in the Carrington subdivision off Staples Mill Road. (Credit: Will Weaver via the RVANews Flickr pool

Where were you during the storm? What did you see? If you have photos of the storm or its aftermath, you can either post links below, submit them to the the RVANews Flickr pool, or email them to me directly at dan@rvanews.com.