Weather! Information on yesterday’s severe weather, and it’s looking like a Frosted Flakes kind of weekend

We’re waiting on official confirmation, but it looks like Virginia may have seen at least three tornadoes touch down yesterday. Fortunately, the storms are gone from the forecast, and the weather for the Folk Festival is going to be GREAT!

Yesterday was quite the busy day, weather-wise. But this weekend? Just like Tony the Tiger says – it’s going to be grrrrrrrrrrrreat! 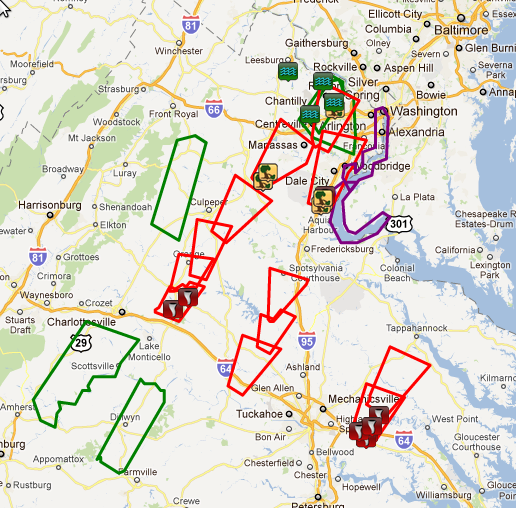 There were multiple reports of possible tornadic damage in both Louisa and New Kent counties, where homes were damaged or destroyed. Other reports indicate some trees were downed along and on I-64 in New Kent County, and the reported tornado in Prince William County appears to have crossed I-95 during the evening rush hour.

Several people were able to obtain videos of the storms, all of which pretty much confirm that we saw at least three tornadoes in Virginia yesterday. The official confirmation won’t come until the National Weather Service finishes conducting storm surveys of the affected areas, which are underway today.

First, from Louisa. The tornado caused damage to a historic 18th century house on the grounds of Sylvania Farms. The storm passed near the area known as Boswell’s Tavern in the county.

And finally, one video from I-95 south near Quantico. The tornado crossed the I-95 during stopped rush hour traffic – had this storm been any stronger, this could have been a disastrous situation (following has NSFW language).

The good news is that we’re not looking at the same storm threat again on Friday. We’ve had some showers this morning, but have cleared out of the area as a cold front sweeps across Virginia this afternoon. Skies will continue to clear, and temperatures will peak in the mid 70s before plunging into the mid 40s overnight tonight. Winds will also pick up behind the front, gusting to near 30 mph this afternoon.

Winds continue to stay strong on Saturday, gusting to 25 miles per hour tomorrow. Skies remain clear as high pressure builds in across the Mid-Atlantic, and temperatures remain in the mid 70s for highs. Lows overnight again fall into the mid 40s.

The winds will die down some on Sunday, but we’ll continue to see great weather. It’s going to be another day with highs in the mid 70s, and lows cool off to near 50.

Our next area of low pressure/frontal system will begin approaching the area on Monday and Tuesday next week, and rain creeps back into the forecast Tuesday and Wednesday. In the meantime though, it’s going to be amazing weather for the Folk Festival and all other outdoor activities this weekend. Have a great one!