Weather! Gorgeous weekend ahead, next week slightly less so

It’s a gorgeous weekend with wonderful warm temperatures, but it all comes to an end on Monday. Our next chance for precipitation comes Tuesday and Wednesday of next week, and yet again, there’s a question about whether it will fall in solid or liquid form.

You may have heard people make reference to the “Central Virginia snow hole” before – the seemingly mysterious and mythological, yet reliable behavior in snow storms that leads to a strange lack of snowfall across the same areas. While I’m not prepared to either confirm or deny the existence, there was an actual snow hole during Wednesday’s event – right over me. 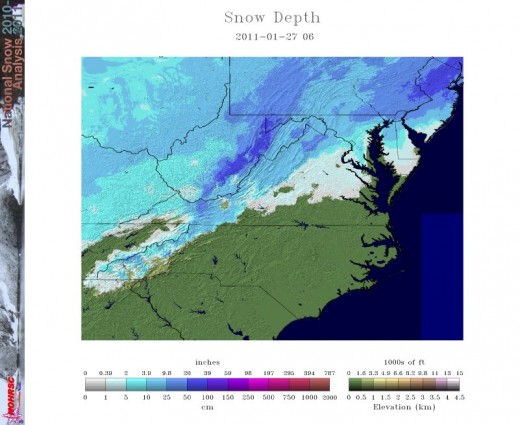 Take a look across the band of heavy snow in southwest Virginia. See that hole? Yeah, that’s me. Richmond picked up 0.7” of snow from the storm; Blacksburg picked up 0.7” less.

Next week gets funky again, unfortunately. Temperatures will drop back into the mid 30s for highs, and clouds build in beginning Monday. The clouds continue though the overnight hours, with lows in the upper 20s.

A weak upper-level disturbance slides south of the area Monday, while a strong area of low pressure develops across the plains. The exact track of this low as it moves north and east will depend on how much of the precipitation it carries falls in liquid form. Right now it will depend a lot on the position of the low relative to an area of high pressure over New England responsible for funneling some cold air along the eastern side of the Appalachians. Enough cold air will give us the chance for some snow or ice, warmer air will mean more rain, likely beginning Tuesday night and lasting through Wednesday. I’ll have an update Monday night.