We’re finally starting to see a break from the several days of rainfall that have plagued the region. After surviving earthquakes, hurricanes, power outages, and now flooding, I think everyone deserves a gorgeous weekend. And that’s what you’re going to get.

Over the last couple days, it has rained. A lot. Officially, Richmond has picked up 6.06” through Thursday.

We set a rainfall record for September 7 on Wednesday, when 3.76” of rain fell. We’ve already surpassed the climatological average for September of 3.98”, and we’re now 4.5” above average for the year. Tropical systems can be great rainmakers for central Virginia. The combination of Irene last month and Lee’s remnants have erased all traces of drought across most of Virginia. 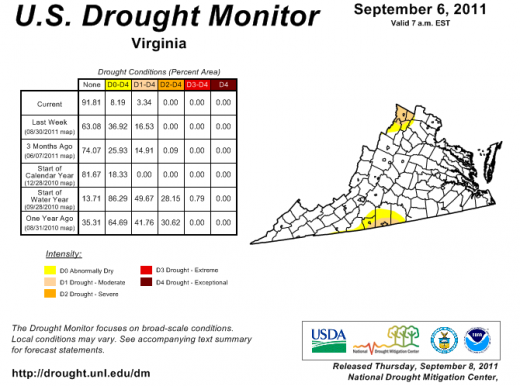 Unfortunately, it’s not all been smooth sailing in Virginia. Flooding reports from the National Weather Service stretch from south of Petersburg along the I-95 corridor all the way into the DC metro and beyond, extending into Pennsylvania and New York state, where near-record river flooding along the Susquehanna and other rivers has forced thousands of people from their homes. Some areas in the Northern Neck and northern Virginia received between 10-15” of rain this week. Flash flooding killed three in the DC metro area. The Washington Post’s Capital Weather Gang has posted a thorough review of how this September’s flooding stacks up to other damaging weather events.

It also led some people to do things that I can’t condone in any way, shape, or form.

Back in central Virginia, visible satellite is quickly clearly away lingering clouds, allowing the sun to break out wholesale for the first time in several days. Southwesterly flow around the base of an upper level low centered over the Ohio Valley is responsible for the new influx of warm, humid air into the region. For the remainder of Friday, expect partly to mostly sunny skies during the afternoon, as temperatures climb into the mid 80s. There’s some instability building in the atmosphere for this afternoon, so we’re not totally out of the woods with regard to a passing shower or thunderstorm. I don’t expect coverage will be significant, but as you are likely well aware, those that do get rain may get a lot in a short period of time. Plan on overnight lows in the upper 60s to near 70.

Expect more of the same on Saturday, with partly to mostly sunny skies and highs in the mid 80s. Some limited instability may again pop up a stray shower or thunderstorm, but I don’t expect there to be much action. Expect overnight lows in the upper 60s again Saturday night.

If you’ve got plans for baseball, NASCAR, or college football in the region, you’re looking good. It’s going to be a gorgeous day to get outside.

On Sunday, we may see some additional cloudcover as another system moves in from the west around the upper level low fixed over the midwest. I’m thinking partly to mostly cloudy skies during the day, but with very comfortable temperatures again – another day of highs in the mid 80s and lows in the upper 60s. Yet again we’re looking at a small chance of a passing shower or thunderstorm, but nothing significant or widespread. Enjoy your weekend!