Weather! Another quiet start to the week; Typhoon Megi ravaging the Philippines

For Monday, that means another day of partly cloudy skies and lots of sun. Highs will reach into the mid 70s again, while overnight lows drop to hear 50, with light winds.

On Tuesday, we’ll see some extra clouds overhead as the front makes another pass through the area, bringing some extra moisture with it. Any rain chances should hold off until the evening hours, with total rainfall under half an inch. Temperatures will climb into the low 70s during the afternoon and fall into the low 50s overnight.

Unfortunately the weather isn’t as quiet around the world. Typhoon Megi (locally known as Typhoon Juan in the Philippines) is currently making landfall on the northern Philippine island of Luzon. Megi is one of the strongest tropical cyclones in the western Pacific basin on record, with a minimum central pressure of 885 millibars and maximum sustained winds in excess of 140 miles per hour, and gusts in excess of 200 miles per hour!

Megi is an incredibly large storm, and it’s likely that Luzon will experience devastating winds and heavy rainfall (in excess of a foot or more in places) while the storm crosses the island. The potential for significant property damage, flash flooding, landslides and even loss of life will be high. 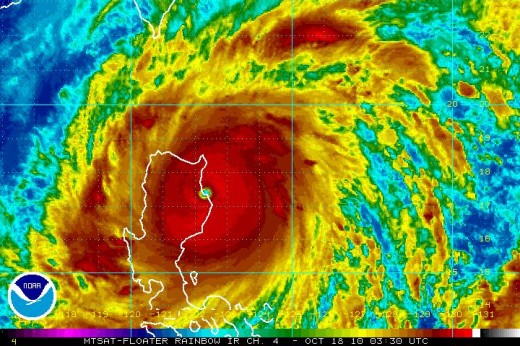 Once Megi crosses the island, it is expected to reintensify and make landfall on the Chinese coast between Hong Kong and Hainan province.

The tropical Atlantic hasn’t quieted down for the year yet either; there are two areas that the National Hurricane Center is watching for development, though both are exhibiting only a low chance for development into a tropical cyclone over the next 48 hours. I’ll have an update on Wednesday.