We’ve got one more warm day after today, and then another cold front comes swinging through the area. Rain and cooler temperatures are on the way. While the rain will be temporary, the cooler air of fall is definitely here.

Before I talk about the next round of cool air headed into Virginia, let’s take a quick trip down to the Caribbean. Hurricane season lasts until November 30, and the tropics are active right now. Say hello to Hurricane Rina:

Rina’s been a spitfire of a storm. It first developed as Tropical Depression 18 on Sunday afternoon, and intensified to hurricane strength in less than 24 hours. Since then, Rina had intensified to a strong Category 2 storm with maximum sustained winds of 110 miles per hour. Rina has weakened to a category 1 storm as it approaches the Yucatan Peninsula and interacts with land over the next 24 hours. As the storm moves into the Gulf of Mexico and closer to Florida, it will take a turn to the east and get ripped apart by strong upper-level wind shear. As morbid as this forecast is, there may still be some interaction with the Keys or south Florida, but likely not as a hurricane. Keep an eye on the forecast if you’re headed that way.

Temperatures are still pretty warm across Virginia, but that’s not going to last much longer. Another potent cold front is working its way across the Mississippi Valley, crossing through the St. Louis area now. It’s 48 in South Bend, Indiana, behind the front, and still 70 degrees in Jackson (JKL on the map) in eastern Kentucky. 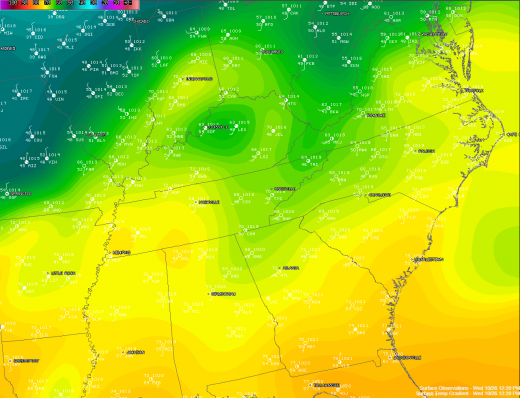 That cold air is slowly marching east; we’ve got another day or so before it makes it all the way to eastern Virginia. We’re heading into the mid 70s today, as clouds start to develop some ahead of the front. Some gusty southwest winds have developed, thanks to a ridge of high pressure situated over Georgia and the Atlantic coast. Expect some strong wind gusts this afternoon; gusts in excess of 20 mph have already been recorded this afternoon at Richmond International. Winds will die down some overnight, as temperatures fall into the mid 50s.

Thursday’s our last warm day, as highs head back into the mid 70s under increasingly cloudy skies. Winds pick up again tomorrow as well, with sustained winds in the neighborhood of 15 mph, gusting again to 25. The front makes its approach during the day, crossing through the evening hours, sending temperatures plunging to near 50 by Friday morning. Scattered rain showers are likely through portions of the afternoon on Thursday, too – make sure to grab an umbrella, especially in the afternoon and evening hours.

Rain chances keep up on Friday afternoon into Saturday morning, as a new area of low pressure develops off the coast. Temperatures will max out around 50 for both Friday and Saturday, and skies will finally begin clearing on Sunday as the low moves off to the northeast.

You may have heard some rumbling about snow with this system. Have no fear, Richmond will not see any snow, nor will most of Virginia. The exceptions will be those areas in the higher elevations, especially above 3000’, and moreso in the northern portions of the state. This will depend heavily on the track of the coastal system, but I’m thinking there will be some flakes in the overnight hours Friday night in those higher areas. Other than that, it’s going to stay all rain. Lows this weekend will range from the upper 30s to near 40, and highs will be back to near 60 by next week. This weekend won’t be quite as glorious as the ones prior, but it’s not going to be a total loss, either.