The weather for the next two days can be summarized in a word: wet.

This is the latest total precipitation guidance from the Hydrometeorological Prediction Center for the period from 7pm Tuesday night through 7pm Friday night. Virtually all of the state is looking at at least an inch of rain, and two to three inches are possible for all but the extreme eastern and western portions of the state before the time this is said and done. The first bit of a very large rain shield is entering far southwestern Virginia. The southern portion of this complex low pressure system has spawned several tornadoes and damaging thunderstorms across Texas and Louisiana this afternoon and evening.

With all of this rain incoming, flooding is going to be a concern across Virginia. The James River is cresting currently at about 12.65 feet. It will begin to recede later tonight and should be back below flood stage by morning. The flood warning currently posted for Henrico, Chesterfield, and the City of Richmond remains in effect until the river has receded back below flood stage. 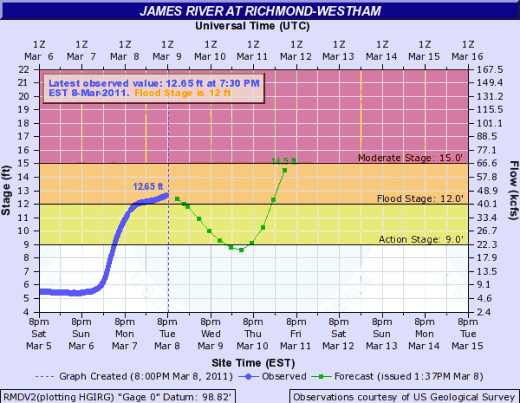 The forecast for the James keeps it rolling pretty high through Friday, as the precipitation that falls over the next three days in the mountains works its way all back downstream, and sends the James higher once again. This is an early forecast, and will no doubt change over the next couple days once the rain starts falling and the hydrologists are able to get a better idea about how much the river flow will be affected. You can visit this site for the latest forecast for Richmond-Westham, and you can visit this link to get an idea of the river status for all of the major rivers and tributaries in eastern Virginia.

Speaking of flooding, a flood watch has been posted for the Piedmont counties immediately to the west of Richmond, including Goochland, Louisa, Fluvanna, Powhatan, Cumberland, and Prince Edward until 5pm Thursday afternoon. If rainfall estimates increase at all, you may see this watch extended eastward.

Clouds will continue to thicken overnight and through Wednesday morning. The rain should begin across most of the area by noon, making your lunchtime excursions all sorts of fun. The intensity will remain light until later in the evening, picking up around midnight. With all the rain falling, temperatures will never have much of a chance to fluctuate, sticking somewhere between 50 and 55 for the majority of the day after warming from tonight’s low of 35.

Thursday is when we see a lot of the real action. It’s going to rain, and it’s going to rain a lot. Temps will climb into the mid 60s during the day before falling to near 40 overnight, as the rain finally starts clearing out well after midnight Friday morning.

I’d expect somewhere between 1.5” and 2.5” of rain by the time this is all done, and plenty of ponding and standing water in areas where the soil is already very waterlogged, and some small streams and creeks may rise out of their natural banks. I’ll have updates on Twitter as conditions change, and will be back here with a weekend forecast on Friday.