Weather! An early week post-mortem; warmup on the way for this weekend?

Unless you’ve all given up on the possibility of ever seeing winter precipitation in Richmond ever again and have chosen to spend the remainder of winter living under a rock or in an abandoned mine on Brown’s Island, you’re probably wondering what happened to the snow I talked about for Tuesday. In short, the dry […]

Unless you’ve all given up on the possibility of ever seeing winter precipitation in Richmond ever again and have chosen to spend the remainder of winter living under a rock or in an abandoned mine on Brown’s Island, you’re probably wondering what happened to the snow I talked about for Tuesday.

In short, the dry atmosphere sucked up all the moisture. I alluded to this some in my forecast Monday morning, as I mentioned at that point that the atmosphere was already lagging behind the models in terms of saturation. The volume of moisture in the atmosphere was small to begin with; because it took more to saturate the atmosphere above the ground, there was less available to reach the ground, and when it did the nose of warm air had already infiltrated the middle layers of the atmosphere, meaning that what did fall came down as sleet and then freezing rain. Thus, virtually no snow. That being said, it seems like many folks got to enjoy a day or two off of work/school without having to shovel any snow, so really, doesn’t everyone win?

The National Snow Survey reports that 65% of the lower 48 is covered by snow as of this morning, including 47 of the 48 states. 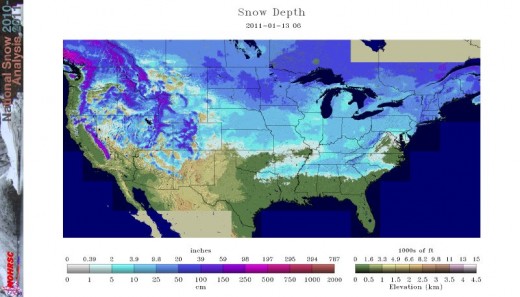 Parts of Alaska are almost perpetually covered in snow and ice, especially in the winter, and the National Weather Service reports a snow depth of about 7 inches atop Mauna Kea in Hawaii, which means that Florida is the only state in the country without any snow. By this weekend, high temperatures in Key West will be approaching 80 degrees.

Speaking of snow, NOAA’s GOES-13 satellite captured this image of the latest winter storm to wallop New England. North Haven, Connecticut received almost 30” of snow and most of the state received well in excess of 20”. Downed trees have shut down Amtrak service between New York and Boston until the tracks can be cleared. 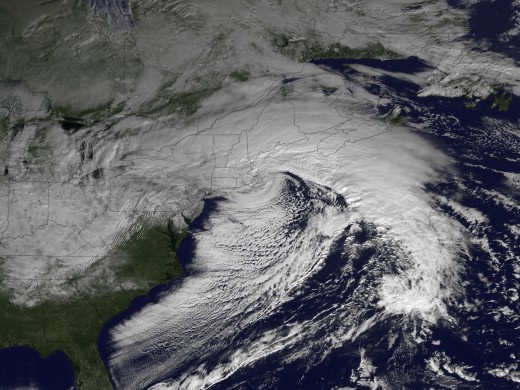 Thankfully, I can say there is no additional snow in our current forecast. High pressure will remain over the eastern half of the country through the weekend, meaning that temperatures for the remainder of Thursday and Friday. Highs both days will max out in the upper 30s with party cloudy skies. Overnight lows will still be chilly, with lows near 20.

For Saturday and Sunday, we’re looking at a bit of a warmup, at least temporarily. Highs will be in the mid 40s on Saturday and approaching 50 on Sunday, with overnight lows both nights right around 30. A pretty big jump from the last couple days, for sure. The next system of interest will be a low building in early next week. Right now there’s a lot of uncertainty about the track and exactly what to expect, but there’s a pretty good consensus regarding temperature – likely most, if not all, of it will be of the liquid variety. I’ll be monitoring over the weekend and have an update for everyone by Monday morning. Enjoy your weekend!