Weather! After a rainy Monday, clear skies ahead

An approaching cold front will keep Monday a little cloudy and damp, but another round of high pressure keeps skies clear for the middle of the week.

Let’s start with this weekend’s northeast snowstorm. This image, taken at 2am Sunday, shows the current depth of the snowpack across the US. 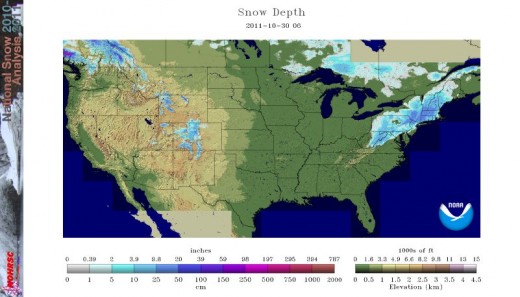 The nor’easter that brought snow from the Virginias to Maine is responsible for 11 deaths, and cut power to over 3 million people. It is estimated that it may take up to a week to restore power in some of the hardest-hit areas. Had this storm come in November or December instead of October, it’s likely that the southern extent of the snow would have extended farther south, and snow totals may have been several inches higher in DC, Maryland and Virginia.

An area of high pressure set over the Delmarva is moving out to sea overnight tonight, as an area of low pressure moves into the northeast and tows a cold front across the mid-Atlantic. Cloudcover has already increased some tonight, and will continue to increase as the front approaches. High temperatures will make it into the mid 50s Monday afternoon. We’ll see a chance of showers this afternoon and evening in advance of the front, which will quickly taper off once the system passes through. Temperatures will fall into the mid 40s overnight.

High pressure moves back into the region on Tuesday, clearing out the clouds and giving us a much more pleasant day. Winds will pick up out of the north behind the low, gusting to 20 miles per hour at times during the afternoon. High temperatures will climb into the upper 50s, with overnight lows in the low 40s.

This ridge will stick around through the middle of the week, keeping skies clear and temperatures near 60 for most of the week. Our next frontal system will approach late Thursday or on Friday.