Weather! A break from the rain

Most of the rain has cleared the area, and the flash flood watch has been canceled. The low pressure system responsible for the past 48 hours’ rainfall is moving northward just offshore. I don’t think we’ll see any more rain, but I can’t rule out the chance of a scattered shower through Friday morning.

Tired of the rain yet?

Both Wednesday’s and Thursday’s rainfall set daily records, of 2.25” and 3.69” respectively. This week’s Drought Monitor doesn’t include the rainfall from late this week, so I’m going to skip posting it this week. I’ll resume posting updates next week, so we can see the full impact of this week’s precipitation.

Speaking of impacts, the next worry is going to be river flooding. Unlike the system from early this week, most of the rain fell over the eastern third of the state, so there won’t be as much runoff to cause a gradual and delayed increase in river levels; we’ll see it pretty soon. The James River has already crested at Scottsville, and is forecast to crest at Richmond-Westham overnight Friday night, just below flood stage. 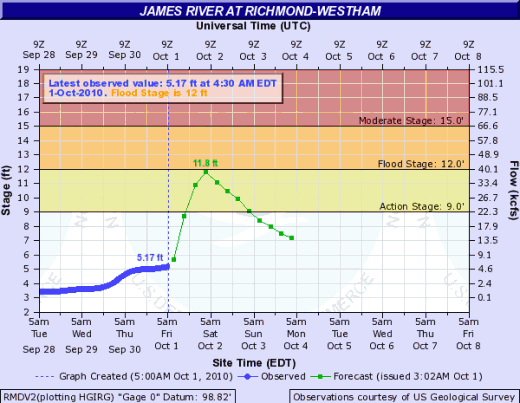 Most of the rain has cleared the area, and the flash flood watch has been canceled. The low pressure system responsible for the past 48 hours’ rainfall is moving northward just offshore. I don’t think we’ll see any more rain, but I can’t rule out the chance of a scattered shower through Friday morning. High pressure is building in from the west, bringing some breaks in the clouds as Friday progresses. Highs Friday will be in the mid 70s under partly cloudy skies. Lows Friday night will drop near 50. Gusty winds will linger through the day as the low moves offshore.

High pressure remains in control for Saturday. Most of the clouds evaporate, leaving us with mostly clear skies and highs in the low 70s. The winds lighten up some, and lows Saturday night fall to near 50 again.

CavCast (vs. Florida State, 12:00pm): Those of you making the trek to Charlottesville to see the Hoos will enjoy weather similar to Richmond’s. Temperatures at kickoff will be in the low 60s under mostly sunny skies, climbing to the upper 60s by the end of the game.

SpiderCast (vs. Coastal Carolina, 1:00pm): Mostly clear conditions will persist for the Spiders as well. Temperatures will be in the mid 60s by the game’s start, climbing into the lower 70s by the fourth quarter.

We get one more day of high pressure on Sunday. Clouds will start developing again as the high moves through the area, and temperatures will drop a little bit compared to the rest of the weekend, only hitting the upper 60s. Lows overnight will again fall to near 50.

Some of the models show that another disturbance will move through the area early next week. I’ll have a full update and let you know what you expect on Monday. Enjoy your weekend!

EDIT: One important item I forgot this morning — our rainfall deficit is now down to just 4.91”. It reached a peak of 10.61” on Sunday. The rains of this week have cut our deficit by more than half.