It is with a heavy heart, and heavier liver, that I submit this, the last in our series on Virginia Wines. And I can summarize my takeaways in one simple sentence… It is with a heavy heart, and heavier liver, that I submit this, the last in our series on Virginia Wines.

Over the past year we’ve covered critically acclaimed bottles and budget-friendly boxes; we’ve broken down Virginia wines basics and helped you seek out hidden treasures. We’ve hiked, biked, kayaked, and braved the gridlock on 95 North. And so, after a year of traversing the hills and valleys of VA vino, we’ve reached the summit. 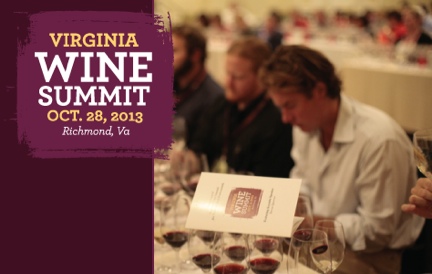 Aren’t you going to miss these ham-handed puns?

The second annual Virginia Wine Summit lured experts from across the country–and the world–to discuss our local wine scene. Chefs, winemakers, writers, sommeliers, master sommeliers, and wine directors from top restaurants, all funneled into the Jefferson Hotel to deliver their two cents on the past, present, and future of Virginia wine. After eight straight hours of tasting and talking Virginia wine (preceded by of full year of writing, traveling, and drinking my fill) I can summarize my takeaways in one simple sentence:

Do what you do and be patient; the best is yet to come.

Do what you do…

A young wine industry (like a young anything, really) is always susceptible to the scourge of expectations. From the bumpkins at the state fair demanding something sweeter, to the big-money investors leveraging their well-funded ignorance, unestablished winemakers are bombarded with opinions from every angle. Yet, despite the pressures to mimic California, New Zealand, Australia, or Argentina, a uniquely Virginia narrative has emerged from our output.

So far, Virginia has staked its reputation on widely overlooked and underrated grape varieties: turning out world-class Cabernet Franc, shockingly good Petit Verdot, and elegant off-dry and dessert wines from an obscure little gem called Petit Manseng. Our Meritage (or Bordeaux-style) blends, not only speak of Virginia’s soil but of it’s place in the world—filling the massive stylistic expanse between their more restrained European forefathers and their over-the-top California cousins. And then, there’s Viognier, which, at this point, is pretty much uncontested as the Commonwealth’s signature white wine. If things continue apace, the terms Virginia and Viognier will soon be as inseparable as California and Cab, Oregon and Pinot, and Florida and that drug that makes you eat people’s faces off.

I never really appreciated the idea of aging wine. I didn’t have a “wine cellar.” I certainly didn’t have the disposable income. Mostly, I didn’t have the restraint (I’m the kind of guy that polishes off a bag of fun-sized Snickers the day before Halloween1). But sampling a few mature bottles at the Virginia Wine Summit provided new incentive to try a little self-discipline.

While most wineries aim to move every bottle before they can gather a little dust, a few focus on wines that are designed to improve with age. Having tasted both a fresh bottle of the Linden Avenius Chardonnay and its 11 year-old counterpart, I can say the two compare like a bud to a bloom. Crisp and austere in its youth, the wine opens up over time to reveal a creamy mouthfeel and a kaleidoscope of complex fruit flavors. Sure, the idea of “wine collecting” sounds like a hobby for the independently wealthy, but all it really requires is a little planning and patience. Stock up on a few choice bottles before Virginia wine blows-up, and sit on them for while. Fifteen years down the road, your cellar will be the envy of collectors throughout all 50 colonies of New China.

This patience also makes a nice metaphor for us cheerleaders of Virginia wine. As the Wine Summit progressed it became easy to distinguish between a few different camps. There were those who touted the superiority of Virginia wine like it was (and probably actually is) their job, and others who regarded it as the surprisingly good product of a small but promising industry. And then there were the winemakers themselves, who often used the opportunity to pick each other’s brains: “Do you battonage in tanks or barrels? How old are those barrels? What do you stir your lees with?” Pretty nerdy stuff. But this is a good thing, and leads to my final thought.

The best is yet to come.

There’s a fun philosophical connection between the current Virginia wine scene and with Thomas Jefferson’s early viticultural efforts in the New World. But, all these poetic projections aside, Virginia’s first commercial vines of vitus vinefera were planted MUCH later, in 1976. That means our wine region is roughly 37 years old. To put that in perspective, Bordeaux has about 2,000 years of winemaking history under its belt. We. Are. Babies.

The number of Virginia wineries has nearly doubled over the last five years, as has their overall quality and reputation. If Virginia wines can impress the harshest critics, woo their way onto top wine lists, and merit its own section in a London Whole Foods, all in its infancy, just imagine where we’ll be in five, 10, or 50 years. The future is bright indeed.