Two wineries in NOVA make for an easy (and history-filled) weekend getaway. When we first drove up to the Winery at La Grange, the first thing I noticed was, well, how non-“winery” the place looked. I mean, sure, there are six beautiful acres of grapes doing their thing, but the grounds of La Grange feel more like a really, really beautiful park rather than a vineyard/winery.

Established in 2006 and located about 40 miles southwest of DC in Haymarket, Virginia, La Grange sits right at the base of the Bull Run Mountain foothills. As tasting room manager and sales director (and sommelier) Kevin Pruett pointed out, there’s no such things as a bad view at La Grange; the beauty of the land and that mountain backdrop floor you at every turn. Picnic tables and clusters of adirondack chairs are scattered throughout the grounds, and the Manor House includes several quiet spots (including “Benoni’s Lounge”, the literally and figuratively cool cellar named for former owner, Benoni E. Harrison) where guests are welcome to hang out and relax. This setup makes it clear that the folks at La Grange want visitors to feel comfortable to settle in for the long haul–to pack a lunch, bring the kids, and make a day of it. As Pruett put it, you are welcome to “bring everything but your own booze.” You’ll want La Grange to handle that anyway because their wines are fantastic, across the board.

Winemaker and general manager (and original La Grange investor) Fletcher Henderson strives to stay true to what he sees as Virginia wine traditions: great drinkability free of any “flashy international” styles. I’m not at all a wine expert, so I don’t think I’d recognize a flashy international style if it punched me in the face, but I can assure you that Fletcher nailed the drinkability part. Highlights included the 2011 Cuvee Blanc, a white blend with lot of citrus and peach to it, and the Snort, La Grange’s take on a Port that is soft, smooth, and goes great with chocolate. But our favorite was the 2012 Rose, a light and fruity wine made totally from La Grange’s own Cabernet Sauvignon grapes1–this is also the wine both Fletcher and Kevin go for at the end of the workday which is usually a pretty good sign. General’s Battlefield was a very close second, partly because it’s a pleasant, easy sipping wine, but also because this red blend is aged for 12 months in Virginia oak barrels constructed from a tree found on Manassas Battlefield. I’m a Virginian, born and bred; I can’t resist that kind of historic sentimentality.

The Winery at Bull Run 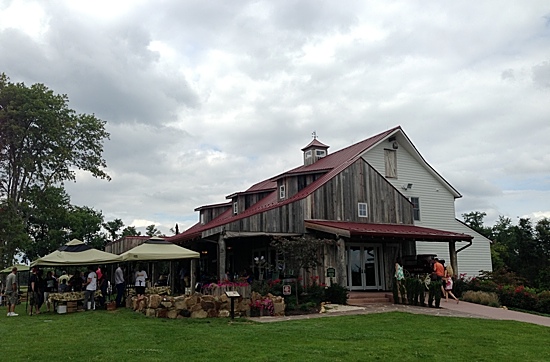 The Winery at Bull Run is big on being the closest winery to DC, but you should know that it’s also the closest winery to Bull Run–as in where the actual battle took place. And even though the winery wasn’t established until 2012, owner Jon Hickox is devoted to using the space to highlight the history of the area. The building holding both the tasting room (upstairs) and the winery and barrel room (downstairs) is built out of reclaimed wood and showcases various treasures Hickox finds during his continued efforts to explore the area and expand the space–everything from old cookie tins to a particularly bad-ass-looking scythe.

Although Hickox likes to showcase the history of the place, Bull Run doesn’t feel old, stuffy, or museum-like by any means. The tasting room is bright and open and the grounds offer plenty of room for families to spread out and enjoy their day. Or, should you be in the market for time spent away from people who can’t partake in Bull Run’s offerings, they also have an “adults only area” where people ages 21 and up can enjoy their wine in some additional peace and quiet.

Even though Viognier are the “official” grape of Virginia, The Winery at Bull Run devotes all of their acreage to the Norton grape because, as they put it, “it is America’s true native grape.”2 However, their wines aren’t limited to Nortons; like La Grange and other wineries around Virginia, Bull Run purchases grapes from other vineyards so winemakers Chris Pearmund and George H. Willson III can offer up a variety of delicious wines to their guests. The 2012 Lilly’s Viorgnier (named after the newest addition to the Hickox family) has a great floral scent and a light honey/lemony taste. The 2012 Delaney (named for the Hickox’s oldest daughter) is a lovely white blend with more of a straight fruity (peach and apricot) taste. Both make for easy sipping–especially if served ice cold. Their 2011 Norton is rich but offers a nice sweetness that I don’t normally expect with red wines. And finally: beware the 2012 Blackberry. Not because it isn’t delicious but because it is and tastes as if there is no alcohol in there whatsoever. It could be trouble–or lots of fun, depending on your perspective.