We take a jaunt through some of central Virginia’s most popular wineries (Barboursville, Stinson, Flying Fox, and Delfosse) to taste some of the region’s best wines amid another lovely autumn. With more than half of the Commonwealth’s vineyard acreage densely packed within its borders, the Monticello region is arguably the heart (and certainly the most visible face) of the burgeoning Virginia wine industry.

And what a pretty face it is. Especially this time of year.

There is Virginia wine and then there is the Virginia wine experience. Visiting vineyards around the Monticello AVA (American Viticultural Area) involves so much more than the swirling, sniffing, and slurping done in the tasting room. Between the curving country roads unfurling through a kaleidoscope of fall colors, and the impassioned words of the winemakers themselves—as they muse on the local terroir and the fulfillment of Jefferson’s dream of vines thriving in the commonwealth—the intoxication begins well before the first drop is poured. And judging by that effusive last sentence, I’m still kinda drunk on it. 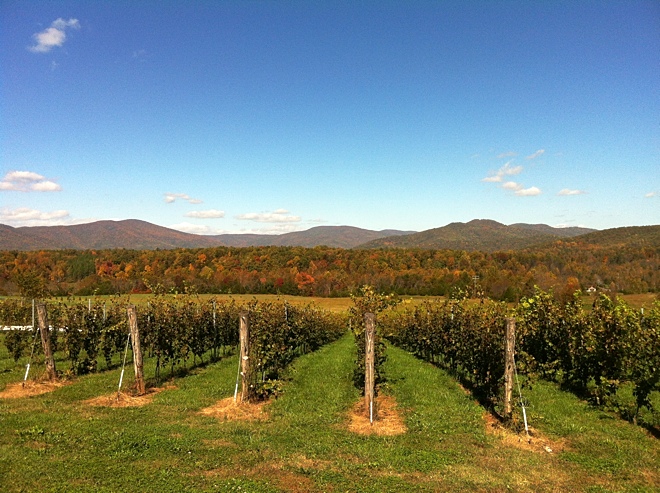 Peripheral pleasures aside, it helps to have an itinerary. You don’t just want to pull over for the first set of grapes you see on the side of the road (also my favorite piece of advice for single ladies). Drawing on tips from friends, colleagues and the good ole’ internet, I charted a course that included time tested institutions, promising newcomers, and a little room for improvisation.

Our trip began at Barboursville Vineyards which, dating back to 1976, is the grandfather of Virginia vineyards, whose founders were the first in the state to grow wine grapes commercially. Pulling up after sundown, we missed out on the full spectacle of Barboursville’s pristine grounds that famously houses the ruins of a mansion designed by Thomas Jefferson for Virginia’s 18th governor, James Barbour. Assistant winemaker, Daniele Tessaro escorted us through the winery’s sprawling facilities while regaling us with tales of the vineyard’s history and methods. Though in presentation Barboursville is the quintessential Revolutionary-era winery—wearing the Jeffersonian link like a badge of honor—there’s an entirely different history informing the wines.

Winemaker Luca Paschina (like his predecessor Gabriele Rausse and founder Gianni Zonin) hails from northern Italy, and, in a way, this Virginia winery functions as a kind of Venetian outpost. Exhibit “A” being Barboursville’s embrace of Italian grape varieties rarely grown elsewhere in Virginia, such as Sangiovese, Barbera, and Nebbiolo. In addition to all of those, a few unexpected (and not so unexpected) highlights included a Reserve Chardonnay, which offered a refreshing compromise to the standard stainless steel vs. barrel aging ultimatum—with subtle oak notes offset by a bright green-apple acidity; The Octagon, Barboursville’s celebrated flagship Meritage; and a floral and fruity (yet not stupidly sweet) dessert wine they call Philéo.

The takeaway for me, however, wasn’t any one particular item, but the overall standard of quality. That evening we tasted about a dozen wines and there wasn’t a dud in the bunch. No flaws, no off flavors, just one beautifully constructed wine after another. Not so shocking when you consider that the Zonin family has been in the winemaking business for over 200 years. Clearly this is not their first (whatever the Italian equivalent of a) rodeo (is). 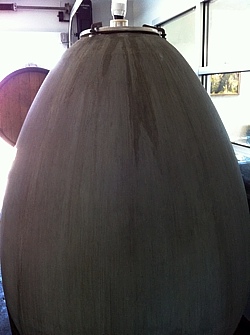 Stinson Vineyards served as an abrupt palate cleanser to Barboursville’s regal, relatively large-scale production. Located in “downtown” (read: there is a restaurant) White Hall, Stinson is a charming three-year old winery built and run in total DIY fashion by the father/daughter team of Scott and Rachel Stinson. This tiny operation brings new meaning to garagiste winemaking, with its entire fermentation facility housed in a repurposed three-car garage. The quirky crown jewel of this operation is a 2,645-pound concrete egg (right), which adds a characteristic minerality to their exceptional Sauvignon Blanc. Owner Scott Stinson views the vineyard’s scant size as an advantage, allowing them to implement time-tested (and time-consuming) techniques to encourage healthy plants and premium fruit, which is all harvested by hand. “There’s a lot of things you can do in a vineyard on a small scale that you can’t do on a big scale. [Larger vineyards] can’t do what we’re doing,” he said.

An impromptu, post-breakfast stop into Flying Fox Vineyards produced one of the trip’s unexpected high points. Another tiny, family run operation, Flying Fox is the labor of love for husband and wife team, Rich Evans and Lynn Davis. The couple retired from lucrative careers and, with no previous experience, thought it would be fun to start a vineyard. If that narrative sounds familiar, it’s because that’s the story behind nearly every crappy winery in the world. BUT, unlike your average overnight winemaker, the Flying Fox folks are clearly motivated more by a genuine love of life among the vines than by some clumsy romantic impulse, and have spent years growing grapes for others before launching a label of their own. A tasting through their small but solid portfolio highlighted a smooth, cedary Cabernet Franc and one of the best local dry rosés I’ve tasted thus far. A refreshingly competitive price point made these wines especially easy to love. 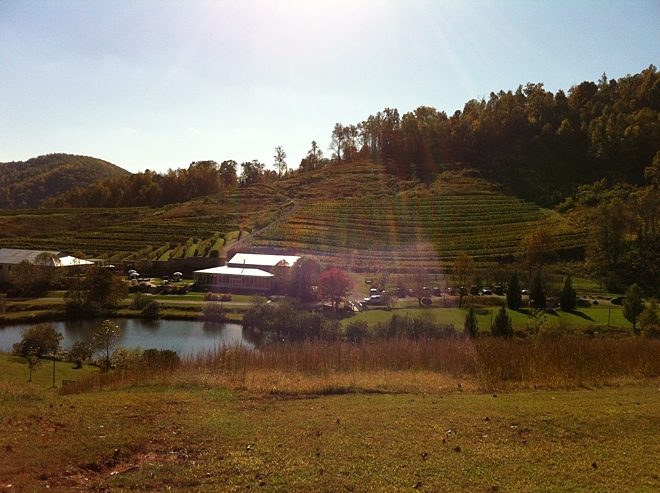 As the long road leading into Delfosse opened up to reveal a steeply terraced vineyard and landscaped patio encircling a sun-dappled lake, I thought, “these people could literally serve me a cheddar cheese and back-hair smoothie and I would be lap it up like a dog.” Easily the most stunning scenery in a trip filled with stunning scenery, Delfosse is a vineyard that even a teetotaler would enjoy. A theory evidenced by a packed tasting room that included a group asking what there was to drink “besides wine” and a guy dozing off in front of a two liter bottle of Sprite (turns out the vineyard had just run a LivingSocial deal). Deal or no deal, Delfosse remains one of the region’s most popular wineries. Not just for the gorgeous setting—which also includes five miles of hiking trails—but for a portfolio that deftly balances more “serious” dry wines with some slightly sweeter offerings primed for mass-appeal. And then there are a few ambitious blends that fall in some uncharted middle territory. Case in point, Delfosse’s 2009 Reserve d’Oriane, named for the owner’s daughter and made with a blend of Viognier, Petit Manseng and barrel-aged Chardonnay. While my inner oenophile was buggin’ out at the bold juxtaposition between explosive tropical fruit flavors and toasty oak underpinnings, my contented inner every-man just wanted to curl up by the nearest bottle of Sprite, and drift off to dreamland.

Up next: the Goddess of Truth (Veritas), the Sovereign of the Monarchy (King), and also Dave Matthews (Blenheim), when our tour of the Monticello AVA continues.