The Northern Neck may be the most mysterious part of Virginia, and like the rest of Virginia it’s absolutely infested with wineries! The Dog and Oyster Vineyard

If you’re headed to the Northern Neck from Richmond, you’re most likely going to get there by way of the Robert O. Norris Bridge. Luckily for those who aren’t huge bridgefans2 there have only been two fatal accidents involving vehicles that have flipped over the side of the bridge and into the Rappahannock River!

Waiting for you on the other side of the bridge, assuming you make it across alive, lies Irvington–or as you may know it “Stars Hollow from the Gilmore Girls.” And once you’ve arrived in town, there’s little chance you’ll miss the turn for The Dog and Oyster Vineyard, what with the pair of 40-foot corkscrews standing guard at the driveway. Sure, some might find them a bit gimmicky, but I found myself charmed by them. In fact, I was charmed by everything The Dog and Oyster (and Irvington/Stars Hollow) had to offer during our visit. 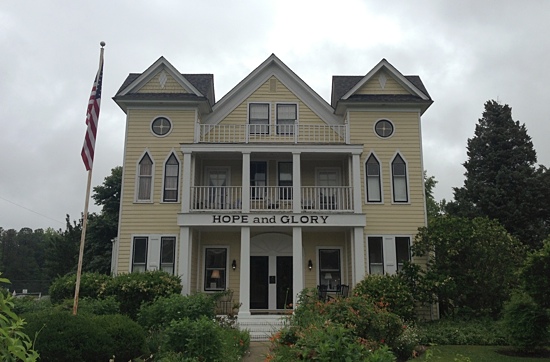 The Hope and Glory Inn–which is probably where Rory Gilmore will get married.

Owner Dudley Patteson (who is as about as friendly as they come) welcomed us to “The Wine Stand,” their tasting room housed in a humble but lovely building with a screened in porch furnished with rustic tables and mismatched chairs–and amazing views of the vineyard in every direction.

As Mark Hollingsworth, The Dog and Oyster’s wine grower (and Dudley’s stepson, something of which Dudley is very proud) guided us through his selection of wines, it became obvious that this guy really loves his job. Using terms to describe the wine that even n00bs like us could understand (“angular” and “round” were especially helpful), Mark made the wine world feel accessible: an industry focused on craftsmanship and collaboration rather than competition. One of reasons for selling wine is to promote the Chesapeake Bay Wine Trail as a whole.

And where do the dogs and oysters come in? Well, The Dog and Oyster is home to several rescue dogs who help guard the grapes from the deer that live around the property–apparently those guys have quite the (annoying and expensive) sweet tooth. As for the oysters, you can’t turn around in a bayside town like Irvington without tripping over a pile of oyster shells.

Halfway up the Northern Neck, say, right around the adam’s apple region, is Hague, VA. Located on the historic Buena Vista farm in Westmoreland County, The Hague Winery began operations in 2008 after Stephen and his wife Cynthia completed an eight-year-long restoration and renovation of the property. The Madeys entrusted their 2008 harvest to renowned winemaker Michael Shaps at Virginia Wineworks, and they’ve been working with him ever since.

Tastings at The Hague include wines ranging from the crisp and citrusy Chardonel to their fuller Meritage (rhymes with “heritage”, not “garage”), our favorite wine of the entire trip. You’ll close things out with a sample of the Cynthia Dessert which is named for the lady of the house and is just sweet enough.

Just a heads up: when you walk into the tasting room, a renovated barn, at The Hague Winery, don’t expect much fuss. Owner and grape farmer Stephen Madey is a former naval aviator and very much all business when it comes to his wine. That’s not to say he’s unfriendly; he just seems to prefer to let his wine speak for itself. And, guys, it does. 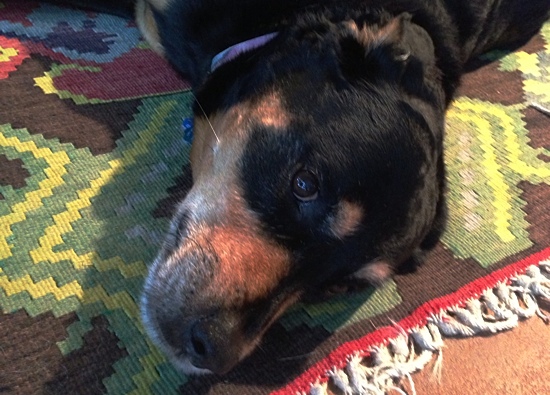 If you’re looking for a gushy greeting, the Madeys’ dog Ellie is quite a snuggler. Don’t be surprised if she gives you a nuzzle or two. Or 50.

Back in the 1970’s, Carl Flemer Jr., owner and founder of Ingleside Plantation Nurseries, started making his own wine. Eventually his son Doug got involved, and the family started making plans for a winery. 1980 marked Ingleside’s first commercial harvest, and the vineyard and winery has been going strong ever since.3 With that first harvest taking place over 30 years ago, Ingleside Vineyards is one of the oldest wineries in the state (but still 150 years younger than Northern Neck Ginger Ale). 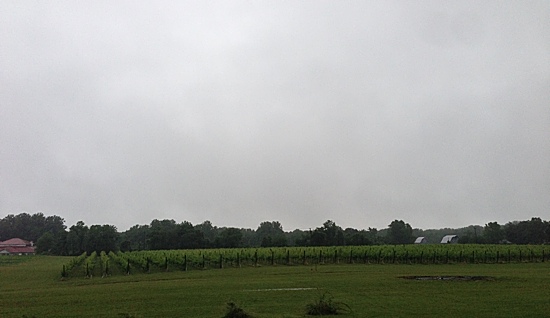 As Ingleside is a vineyard and a winery, their wines are made on the premises. Chris Flemer, the youngest of the five Flemer kids, gave us the grand tour of the place, walking us through the entire wine-making process, explaining the different steps required when making a white versus a red (tannins, y’all!), and so on. We peeked into the wine-makers lab (it totally is a lab; I saw beakers and test tubes and…other science-looking things!), stared in amazement at the massive steel barrels housing some of their wines-in-process, and got a glimpse of the bottling line. Chris also gave us a quick lesson on how the grain of a wooden barrel affects the taste of the wine4 which made us feel very smart.

We were Ingleside’s last tasting of the day, but Chris took his time walking us through their selection, even throwing in some off-menu favorites like the Pinot Grigio. All of their wines were delicious with my favorite being the Syrah. We also walked away with a bottle of their Chesapeake Chardonnay which disappeared rather quickly; I miss it very much.