The Tree of Life: Bring a book.

There is absolutely no way that you will feel neutral about Terrence Malick’s bold conversation piece. You will love it for its innovation, or you will hate it for torturing you. Or, you will opt out entirely and go spend time with your loved ones, doing your best to shield them from the poorly executed visions of pompous artists.

If you follow the various dramas of film criticism, which I don’t recommend, you’re probably already aware that The Tree of Life, the darling of Cannes, is causing some consternation. Critics everywhere rave over Terrence Malick’s latest achievement, applauding his courage and skill at evoking powerful feelings while tackling overwhelmingly huge questions like, “Where is God? What does He think about us? How did we get here? Where are we on his priority list when there are rings around Jupiter to consider?” A beautiful rendition of heavy stuff, as experienced through the eyes of a child. 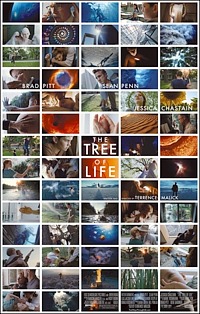 The majority of the public just wanted the damn thing to end, and this time, I’m siding with them.

As a good friend of mine says (often and with feeling), “I don’t care how beautiful it is, if your film can’t keep me interested, you fail as a storyteller.” It’s no question that Malick, set decorator Jeanette Scott, cinematographer Emmanuel Lubezki, and everybody else involved with The Tree of Life took great pride in their work. The film is stunning – consisting of quick, unsettling shots that are about half the time linked together and focus mainly on a family living in the South in the 1960s (intercut with really thrilling — I say that without sarcasm — shots of natural wonders on our planet and beyond). At first, I completely reveled in what I thought was pure genius. What a smart way to put human beings in perspective, said I to myself, as I compared the relatively insignificant trials of one family with “footage” of various evolutionary developments that must have taken millions of years. Whispered voices asked the tough questions, and I contentedly considered their answers while I gazed at an erupting volcano.

Twenty thousand hours later, I’m still looking at volcanoes and thinking of those same questions, but I’m just not making any progress. The whispered voices continue their inquiries but not loudly enough to drown out the more insistent voices in my head that are telling me to run far, far away.

If The Tree of Life had been a short film, then great. Lots of thumbs up and whatnot. But it was two and a half hours of the same thing — the same feelings, the same comparisons, the same beautiful devices over and over again. The essential human truth that I had been ready to discover right alongside the filmmakers, I now cared about not at all.

The critics whose “get the hell out of there!” voices also overpowered their “why, look, a pretty, thoughtful film!” voices agree that The Tree of Life is heavy-handed. And it seems difficult to imagine, doesn’t it? A film consisting of montage-like sequences during which very little is explained — how can that be heavy-handed? It’s the voices, I think. We get what they’re asking pretty quickly, but they just keep on going. And that nature footage…would five minutes of it have sufficed? Then there are seemingly endless series of vignettes in which the mother (Jessica Chastain) continues to be perfect while the father (Brad Pitt) continues to be a jerk. More volcanoes, some hammerhead sharks, then back to summer in the South when your dad yells at you for slamming the door. Poignant…until it’s put on repeat.

While we certainly need careful filmmakers with an eye for detail and a vision that extends beyond blowing up aliens, a good film need not be one that tortures its audience. All that resentment, fatigue, and frustration that you as a filmmaker are building within your viewers will really start to crowd out whatever other feelings you’re attempting to access.* And that’s something a truly talented artist won’t ignore.

*Unless, wait, those WERE the feelings I was supposed to be feeling…in which case, ignore this entire thing. Brilliant job, The Tree of Life!