Nick and I were two of ten contestants in the contest last Saturday for Café Gutenberg’s one-year anniversary. Close runners-up were Eric Burdo from the Brazilian Jiu Jitsu Academy and Patrick Harris of the Boka Truck. Patrick’s birthday was that day, and he’d already had beer, a hamburger, and a hot dog earlier, which he later said he regretted doing.

We were served three quarts, or six pounds (by volume) of a tofu scramble. Nick won by eating two quarts worth (or about four pounds). Word was he had to go back to work after the contest. It took me the rest of the night to digest my food, so I don’t know how he did it.

One of the contestants, Mo Karnage, was decked out in with four-inch-high, clear, drag-queen shoes, blue tights, green athletic shorts, a men’s tank, a bullet belt, and bedazzled football shoulder pads. She had an entourage, theme music, and signs, so that was pretty intimidating from the start. Several of her supporters were from Food Not Bombs (which had a substantial contingent there of eaters and viewers alike). Other costumes included Nick with a foam cheese hat, and Eric with his Jiu Jitsu bandana. The rest of us just wore normal clothing.

They didn’t tell us what we were eating or the rules until right before the contest. By the look on all of our faces when the food came out, we weren’t expecting such a mountain.

DJ Reinhold manned the bullhorn and told us the rules: 12 minutes to eat as much as we could. The winner would be the one who ate the most. He also included what to do in case any of us had a “reversal”: the contestant could either continue eating their own vomit or be disqualified.

Initially, when they told us 12 minutes, it didn’t seem like enough time, but in retrospect, it’s a good thing it was not any longer, because we wouldn’t have made it. At the start, we all plowed into our piles with gusto, for the tofu scramble was tasty, mixed with spinach,onions, and potatoes. Probably about halfway through, I began to look around the table and started recognizing on the others’ faces what I was feeling: full. And like I should slow down before I had a reversal of my own. Unfortunately, two of the contestants couldn’t hold it down. Since the rules stated if you had a reversal, you had to continue eating to stay in; one of the eaters was a trouper and continued, eating her own vomited tofu, both to the dismay and delight of the crowd.

The spectators were lively and cheered on their friends, often shouting encouragement and clever phrases like “H2 No” whenever we picked up our glass of water to help the tofu go down. 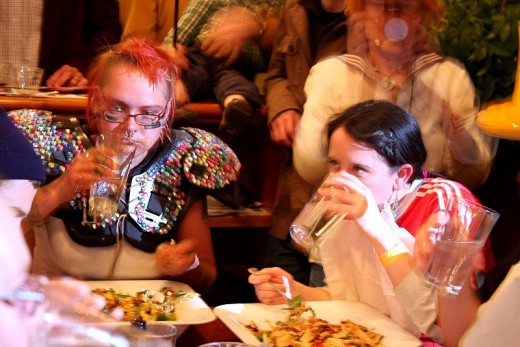 Other contestants included Emily Harry, Mattie Mayhem Hinkley, Miles Quillen, Alyssa Argenzeeo, and a guy who came in at the last minute who didn’t have a headshot, so I don’t know his name.

The evening also included free beer tastings of two new brews (Old Chub and Bavik) and live music by GULL and DJ Mir. I was disappointed not to be able to do more than just taste the beers, needing the room in my stomach for tofu.

VCU student Harrison Moenich, a junior in the filmmaking and photography department, was there filming a documentary for a final project. He was accompanied by photography major Eric Carlson. They interviewed the contestants and have plans to follow up with us as well. I’m excited to see what they come up with. Check Café Gutenberg’s Facebook page for details as they arise.