The week ahead: mild temperatures into next week, but where’s the rain?

There’s some outstanding weather in store for the Grand Illumination tonight and the Christmas Parade tomorrow. Mild temperatures are in store for most of the week ahead. 70 degrees in the first week of December sounds lovely to me! But there’s a price to pay, even with good weather – I’ve got a look at the latest drought statistics.

If you’re a fan of spicy food, “mild” probably isn’t a great word to hear. If you’re decidedly NOT a fan of winter, it’s a great word.

But before we get into that – let’s talk about special events. Planning on attending the Grand Illumination and/or the Christmas Parade? You’re in good shape both tonight and tomorrow. Temperatures should be quite mild for the Illumination at the James Center, still hanging on to the 50s when they throw the switch. Plan on temperatures around 30 if you’re going to try to get a good spot for the Christmas Parade. Layer up – lots of sun will make it easy for temps to quickly rebound into the 50s by the time Santa Claus makes his way down Broad Street. 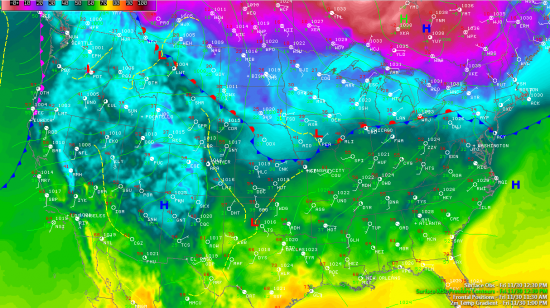 Here’s a look at temperatures across the US this afternoon. The area of high pressure sitting off the North Carolina coast is helping to keep a lot of the much colder air bottled up closer to the Canadian border, and it’s not going anywhere for a few days. That won’t necessarily be great for anyone living in, say, the Dakotas, but for us it means lots of sunshine and warm temperatures for a few days. Unfortunately, the big question to answer this week isn’t if we’ll see a return to the cold anytime soon, but rather when.

Here’s what the American models are projecting out for the next week. The important thing to look at here, especially later into next week, is the sharp drop in temperatures as the high finally erodes and that Canadian air comes crashing back into the southern US. Until then – 70! In December! I can’t make this stuff up, folks.

The only negative will come late Sunday and early Monday as a weak cold front precedes the main boundary slated to arrive later next week. The biggest concern for central Virginia will likely be some increased cloudcover and breezy conditions on Sunday and Monday, and maybe a small chance for a quick round or two of rain Monday, but nothing significant.

When the main front arrives late Tuesday and early Wednesday, some rain showers will be likely. We’ll see some stronger wind gusts behind the front on Wednesday and Thursday in the neighborhood of 20 mph. Temperatures will also plunge behind the front as that dreaded Canadian air mass returns.

Yes, we’ve got rain coming next week. Right now, model projections place the total accumulation across most of the area at a quarter inch or less. Richmond is nearly three inches short on rainfall since November 1, and we’re now nearly seven inches short for the year. That’s a pretty big deficit, and short of a large tropical system materializing over Virginia in the next 48 hours or so, we’re going to continue to be dry for a while longer.

As a result, we’ve seen the portions of the state impacted by drought expand.

Here’s the US drought monitor from October 30th: 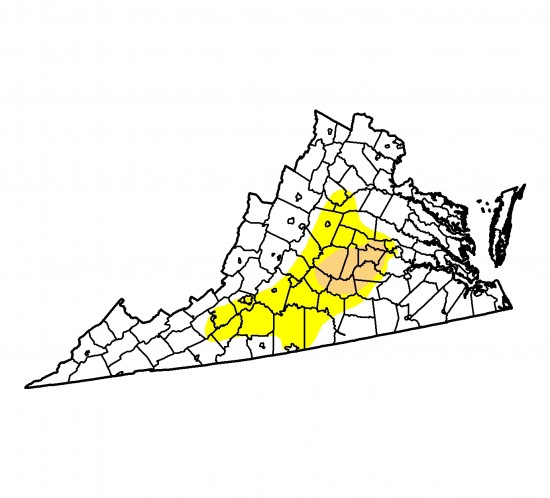 At the time, most of the heaviest impacted area lay just west of the Richmond Metro across some of the Piedmont counties. Three quarters of the state was not affected by drought at all, while twenty percent was abnormally dry and five percent was considered to be in a moderate drought. Now compare this to this week’s Drought Monitor update: 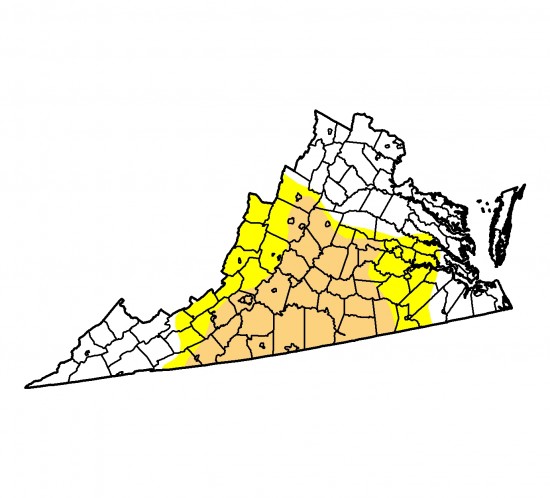 The area of moderate drought has expanded significantly over the last month, covering more than a third of the entire Commonwealth. Over half – 57% – is at least abnormally dry, while the remainder of the state is unaffected. Obviously we’re not in the middle of the prime growing season, but a continued drought will likely have impacts on Virginia agriculture in 2013.

There’s a price to pay even with fair weather.