The week ahead: after a hot Friday and a stormy weekend, cooler temperatures will prevail.

We’re in for a bumpy ride over the weekend, starting with temperatures in the 90s and ending with highs near 80, and dodging rain and thunderstorms in between.

We’re looking at a preview of September in the coming days, as temperatures abruptly shift from almost ten degrees above average to several degrees below average by the start of next week.

The Next Seven Days

It’s a warm, humid Friday morning in Richmond, with temperatures already into the 80s and dewpoints near 70. That’s all going to change over the weekend. There’s a large area of cooler Canadian air moving across the Plains and into the Midwest and Ohio Valley.

Pop quiz time! Let’s play one of my favorite games — find the cold front. Take a look at the following temperature map from this morning. 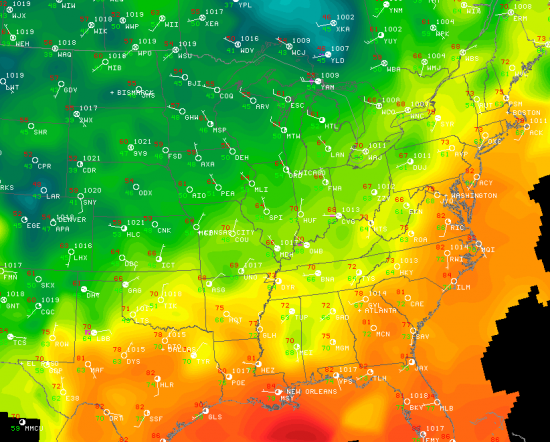 Think you’ve got it? Here’s the answer.

Unfortunately, this front is going to take it’s sweet, sweet time crossing Virginia. While it will enter the western part of the state, bringing showers and thunderstorms ahead of it. Rain shows up in Richmond beginning in the early morning hours, with the front finally passing through around sunrise. While conditions will generally be overcast, rain will not be a guarantee; showers/thunderstorms will be somewhat isolated.

The threat for showers and storms will continue through Sunday as some instability will continue to linger. Temperatures will only peak in the low 80s beginning Saturday, and lasting through most of the week. Temperatures may creep back into the mid 80s later next week. Expect low temperatures in the upper 60s until Wednesday or Thursday.

Conditions will remain partly to mostly cloudy through the early part of the week. The system responsible for today’s cold front will still be spinning over eastern Canada, bringing another, weaker cold front and low pressure system through midweek. Rain chances linger along with the partially-stalled system as well.

Temperatures begin to rebound later in the week, but the pattern continues to be anything but settled. By next Friday, we should see temperatures back near the average for this time of year (85 degrees) and some additional opportunities for some rain and thunderstorms through the week.

Speaking of rain, the latest drought update was released by the US Drought Monitor.

While a good portion of Virginia is rated as “abnormally dry,” one step below drought status, over 17% of Virginia is currently classified as experiencing a moderate drought. Across the lower 48, more than 61% of the country is experiencing some sort of drought, and more than 6% is suffering from “exceptional drought,” the most severe level of the drought index.

More Activity in the Tropics

If we could drop a tropical storm in the middle of the Great Plains, we might have some luck making an impact on the current drought conditions. However, that’s not going to happen. At least not right now. There’s only one active system in the Atlantic, Tropical Storm Gordon, and he poses no threat to the United States. However, if you’ve got travel plans to the Azores later this week, you might want to get in touch with your travel agent.

One additional area of interest is being monitored just off the African coast, but it’s still too soon to tell if there will be any threat to the western Atlantic. If it does develop, I’ll have an update here next week.