The simplicity of Lunch

After steering several of RVA’s most popular bars, Rick Lyons now turns his attention to a simple–but no less extraordinary–restaurant. In 1992, Rick Lyons decided to move to Richmond after visiting the city only once. “I knew I was home,” Lyons said as he sat in the dining room of his restaurant, Lunch, reflecting on his move from Philadelphia. “I took to Richmond quickly.”

While you might not know Lyons by name, you’ll definitely know the restaurants he’s helped steer since arriving in RVA: Bandito’s, Starlite, and The Republic, among others.

He began his local career managing a restaurant in Shockoe, where he met–and later mentored under–famed local restaurateur, Johnny Giavos.

Lyons would go on to help create Bandito’s Burrito Lounge in the late 1990s.1 He later became co-owner of the Fan bar and restaurant, Starlite. In 2009, he opened The Republic, another popular bar.

“I love those places,” he said, but added each are bustling late-night spots that bring a lion’s share of stresses, rowdiness, and odd hours. It was difficult for Lyons, now 49 years-old, to keep up. “I had a really great time doing it when I was younger,” he said, but “how long can you keep up that pace?”

So he left Starlight and Bandito’s about four years ago, parted with The Republic in 2010, and turned his attention to creating a new, more relaxed restaurant.

In Fall 2011, Lyons happened to be driving down Summit Avenue in Scott’s Addition. He noticed a property that was for rent, a former greasy spoon called Sue’s Country Chicken.2 He walked in, chatted up the building’s owners, and struck a deal. In March 2012, Lyons opened Lunch.

“It’s a lot tamer,” he said about the 25-seat restaurant. “It’s not the big party” like the other he’s worked on. “People come here to wind down.”3 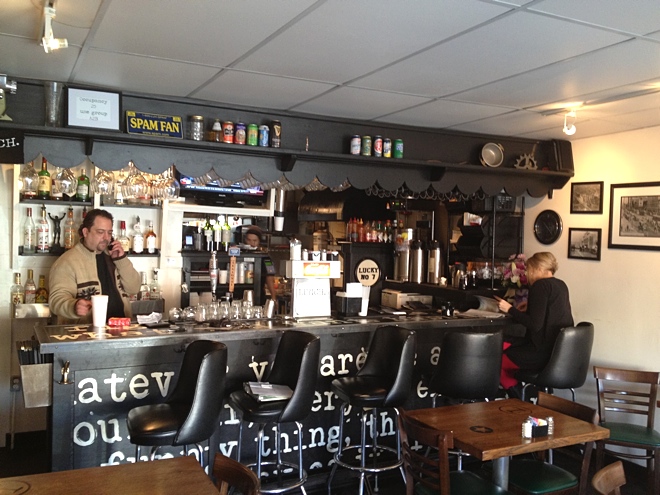 He describes Lunch as being “simple and easy.” It has a black-and-white decor, with typewriter font on the restaurant’s signage and 8 1/2” x 11” menu sheets. “You come here and get the feel of comfort,” he said.

Chef John Seymore has created both AM and PM menus (PDF) that Lyons describes as “baseline ingredients done right and put together well.” AM items (ranging $4 – $12) include The French-Canadian: French Toast topped with whip cream and Nutella. There’s also The Train Wreck: buttermilk biscuits topped with sausage, egg, cheese, and smothered in gravy. Lunch also serves a unique coffee blend crafted by Tallbike Coffee Roasters, an ancillary of Lamplighter Coffee.4

Popular items on the PM menu (ranging $7 – $14) include the Monument Shrimp and Grits, featuring wood-smoked bacon, and the Seymore Meatloaf, topped with a sweet and spicy tomato glaze, a dish Lyons described as “insane.”

Despite not being open a full year, Lunch has still amassed a loyal customer base.5 Lyons said, “80 percent of people that came in last night, we saw last week.” He added that part of Lunch’s appeal is that “it never gets too loud, never gets too crazy,” and that customers “know the food is going to be good.”

Lyons is also excited about the neighborhood surrounding the restaurant. “Scott’s Addition is really taking off,” he said, referring to several new businesses and residences coming online. He said lunchtime especially teems with people taking-out and dining-in, many of whom return for dinner. Lyons believes when he shows Richmonders what Lunch is all about, they’ll keep coming back.

“Richmond people are loyal to the bone,” he said, adding that they “love to see the little guy succeed.”

Lunch is located at 1213 Summit Avenue in Scott’s Addition. 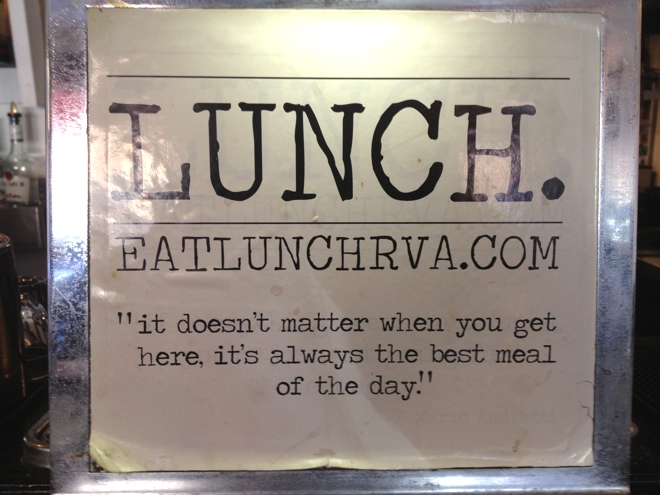