The Hobbit: An unexpected…no wait, that was pretty much what I expected

Someone gave Peter Jackson nine hours to tell the story of The Hobbit? Peter Jackson is at it again, this time with The Hobbit: An Unexpected Journey. Jackson, best remembered1 for the nine hours and 18 minutes that was the Lord of the Rings trilogy, for some reason was given three entire movies to tell the single story of The Hobbit. A story, mind you, that’s only 300 or so pages long is going to take Jackson as much screen time as did three entire books.2 Dude needs an editor. 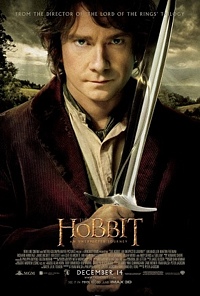 This iteration of The Hobbit runs two hours and 49 minutes. It begins with Bilbo’s (Martin Freeman) not-so-serendipitous meeting with Gandalf and ends with his eventual escape from the Misty Mountains on the back of an eagle. Along the way he joins a merry band of dwarves, slays some trolls, meets some elves, and finds a ring–I’m sure you’re familiar with the goings-on in Middle Earth.3

You can watch The Hobbit in one of three different formats: regular, 3D, and HFR 3D (High Frame Rate). It’s the first major movie to be released in HFR and spills out onto the screen in 48 frames per second as opposed to the normal 24. That’s, like, two frames for the price of one! HFR sets out to solve one of my biggest problems with current 3D technology: strobing and motion blur. I’ve never been sure if my eyeballs just don’t work with 3D or if the technology kind of sucks, but my three dimensional moviegoing experiences are wrought with a sort of ominous, dark flickering. Peter Jackson claims more frames per second fixes this, and he’s right! So that’s pretty nice. But the reality of HFR is…something.

I’ll tell you what, guys, HFR is super realistic. This is great when you’re watching a massive battle scene with orcs flying in from one direction and dwarves crashing down from another. It’s less great while watching a hobbit go get the mail. The added detail makes some computer-generated characters (incredibly) indistinguishable from real life actors–it’s like you’re watching some fantastical dudes do some fantastical stuff right in front of you.

But it’s also abundantly clear which sets are made of styrofoam. Sometimes the additional detail pulls you further into Middle Earth, sometimes its jarringly clear that what you’re watching took place on a soundstage. It’s weird and hard to explain, but at first look you’re probably gonna hate it–I certainly did. But by the end of the film, I had almost grown accustom to it. I think younger viewers, ones without decades of 24-frames-per-second bias, will eventually think this is how movies are supposed to look.

Apart from the technology, The Hobs is pretty much what you’d expect from a LotR-related movie direct by Peter Jackson. You’ve got some cheesy moments, some epic battles, a classic “weary travelers trudging along atop a ridge” shot, and some thunderous music to accompany it all. The merry band of dwarves are mostly unremarkable and interchangeable, but Ian McKellen as Gandalf is always perfect and awesome. The whole thing feels like a three hour excerpt from the previous trilogy–except for Gollum’s scene.

Gollum, voiced by and modeled after Andy Serkis (he even looks kinda like Gollum), lives in a watery cave beneath a mountain full of goblins. After Bilbo gets separated from the dwarves (they’re busy merrily slaughtering goblins in truly video game-like fashion), he ends up in a battle of riddles with the pitiful and twisted creature. It’s one of the only times in the film where you forget the 3D glasses, the bizarro technology, the fact that Gollum is just a handful of pixels, and you get caught up in the tension of the moment. Alas! You’ll (theoretically) have to wait for Hobbits two and three to see if Peter Jackson has any more “good scenes” left in him, because, unfortunately, there aren’t anymore in this film.

It’s hard for me to dislike this movie; I’m so partial to the subject matter. So if you’re like me, and you come from a family that absolutely values The Hobbit and Tolkien’s Lord of the Rings, then you should probably just go ahead and see it. You know you’re going to anyway, and you might as well check out the HFR.

If I’m honest with myself, this is not a good movie. If you’re not partial to or are unfamiliar with the story, then skip it! You’re not missing much (other than super realistic shots of both New Zealand and Ian McKellen’s beard).