The fall of Norfolk and the Battle of Drewry’s Bluff

Continuing our on-going recap of the Civil War, the Union Army sets its sight on Norfolk. Taking that city would position General George B. McClellan and the Union army within striking distance of Richmond. If you’re just catching up, we spent most of April 1862 in a tense standoff between Union and Confederate forces at Yorktown. The Confederate forces there, outnumbered and outgunned, evacuated their fortifications a mere 48 hours before a major Union assault was scheduled to begin. This event would kick off a rapid series of events in the month of May that would bring the war right to Richmond’s doorstep.

After abandoning their defenses at Yorktown, General Joseph E. Johnston’s primary concern was reaching Richmond’s outer defensive positions without being attacked from the rear by pursuing Union forces. Unfortunately, road conditions were abysmal and the march was slow-going–Johnston would have to buy himself some time. He detached the rear guard of his army at the fortifications at Williamsburg to meet the Union forces in pursuit. The ensuing battle would be known as the Battle of Williamsburg (May 5th) and would largely be inconclusive. However, it did have the desired effect of allowing the remainder of Johnston’s army to continue its march to Richmond unhindered. Union General George B. McClellan would, as he often liked to do, claim it as a magnificent victory against superior forces.

While McClellan was at the front claiming victory, President Abraham Lincoln arrived at Fort Monroe on May 6th to personally assess the situation. After the Confederate withdrawal up the peninsula, Lincoln felt that Norfolk was now an easy Union target. McClellan was too busy to meet with Lincoln, so Lincoln took matters into his own hands as commander-in-chief. After Lincoln ordered a naval bombardment, the remaining Confederates evacuated Norfolk and Union soldiers soon occupied the city with little resistance on May 10th.

With Norfolk now occupied, the Confederate ironclad CSS Virginia was on her own without a home base. Retreating up the James River, Captain Josiah Tatnall and the crew struggled with how to lighten the ship enough to navigate the river’s shallow waters. Unsuccessful, they made the difficult decision to scuttle the ship and set her aflame to keep her out of enemy hands.

With Norfolk in Union hands and the CSS Virginia no longer a threat, it was open season on the James River for the Federal navy. A massive naval bombardment of Richmond from the James River now seemed possible. Shortly after the scuttling of the Virginia, five Union warships left Norfolk and headed up the James River to attack Richmond: the ironclads Monitor and Galena and the three gunships Port Royal, Aroostook, and Naugatuck. Early reports of the ships heading up the James River put Richmond into a state of alarm. The Richmond Dispatch confirmed the reports:

The hour of trial seems to have arrived, and although we would avoid giving publicity to anything calculated to excite alarm, or give uneasiness, we deem it useless to disguise the fact that there exists grounds for the most serious apprehensions. The news yesterday is of the most exciting character, and a doubt can no longer exist that the gunboats of the enemy are making their way up James river. This may be relied upon, the last accounts representing them as one mile and a half below City Point, cautiously and slowly advancing. Richmond Dispatch, May 13th 1862

The ships met no resistance as they traveled up the James until they reached a bend in the river about seven miles from Richmond. Perched high above the river, at a spot called Drewry’s Bluff the Confederates had built a set of strong fortifications complete with three large seacoast guns and several more artillery pieces placed in and around the fort. It was the perfect vantage point to harass the approaching Union warships. If the impending gauntlet of artillery fire wasn’t enough to intimidate the arriving ships, there was another obstacle to contend with. Commander Ebeneezer Farrand, in charge of the fort’s defenses, had ordered several schooners and steamers sunk in the narrow river along with several other large pieces of debris connected by large chains, rendering the river impassable by the large ships.

With their advance checked by the river obstructions, the ships anchored and Confederates responded by unleashing a heavy artillery fire. Sharpshooters posted all across the ridge fired down on the crew of the ships. Crew aboard the Monitor would later describe the relentless fire as “patter[ing] upon the decks like rain.” The battle would last for nearly four hours, and the Galena would take the brunt of the attack, receiving 45 separate hits. The Monitor’s armor protected her from the artillery fire, but she couldn’t return fire due to the inability of her guns to elevate high enough to target the batteries atop the bluff. The Naugatuck had to pull back from the battle when one of her main guns exploded. The captain of the Port Royal was wounded by a Confederate sharpshooter.

Enduring heavy fire throughout the entire exchange, the crews aboard the ships fought bravely under pressure. After most of the gunners fell dead or wounded aboard the Galena, Corporal John Mackie led a valiant effort to replace the fallen gunners and continue the assault on the fort at great risk to their own safety. It would later earn him the distinction of being the first marine to receive a Medal of Honor.

Despite their valiant efforts, the Union flotilla was repulsed and fell back to City Point (which was annexed by Hopewell in 1923). The Union navy’s dream of an easy assault on Richmond from the James River was just that, a dream. For civilians in Richmond, the victory was cause for celebration, but was also a sober reminder that the city was just a handful of sunken obstructions away from a massive artillery bombardment. As a result of the encounter at Drewry’s Bluff, the Federal navy never made another attempt to attack Richmond from the river during the war.

Richmond was safe for now, but McClellan would soon approach from the peninsula with his Army of the Potomac. The threat to the Confederate capital was far from over. 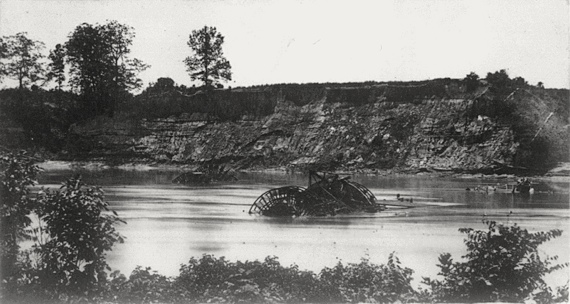