The Dark Knight Rises is disappointing, and you can’t cut directory Christopher Nolan any slack, because he’s done it before using all of the same pieces. Remember The Dark Knight? Specifically, remember Heath Ledger’s horrifyingly insane Joker? Like Batman, the Joker has no superpowers. But unlike Batman, he doesn’t need the funding and resources of a multibillion-dollar corporation–he’s just a guy, he could be anyone. When the Joker decides to terrorize Gotham City, he doesn’t do it for money or political cause, he does it…just because. That’s what makes him so terrifying. 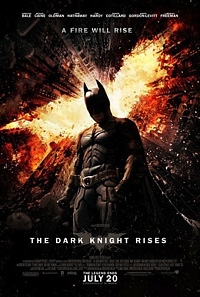 At the conclusion of The Dark Knight, Batman kills Harvey Dent aka Two-Face, but convinces Commissioner Gordon (Gary Oldman, Tinker Tailor Soldier Spy) to keep Dent’s supervillain identity a secret and to publicly hold Batman responsible for the murder of the popular district attorney. Batman takes the rap and disappears while Dent becomes a symbol of hope for Gotham. In the ensuing eight years, the city experiences a period of peace.

TDKR’s plot is overly complicated and full of Wayne Manor-sized holes, but here’s the gist:

TDKR’s plot isn’t complicated in an intricate and wonderful way, like Nolan’s Inception; it’s just overwrought. Nolan crams too much into 164 minutes and consequently can’t devote enough time to any one piece, making everything shallow and flimsy. Major characters make major, life altering decisions without any apparent motivation. Savvy business woman Miranda Tate (Marion Cotillard, Inception), who finds Wayne cold and detestable one moment, suddenly flings herself into his arms without warning. Matthew Modine’s character, who gets a lot of screen time despite being completely unnecessary, pulls a complete moral reversal after a two minute conversation with JGL.1

And really, it’s not just the characters that are weak. The script wants so badly to make Serious Statements about the wealth gap, consumerism, and the role of authority that it takes no risks and uses blatantly obvious symbols to make sure you Get The Point. The second act of the film is spent literally destroying icons of American hubris: a football stadium, the stock exchange, and a prison. None of it is subtle. And, no joke, there is a wistful shot of tattered American flags flapping in the wind.

So who’s doing all of the destroying? It’s Bane! Who’s Bane? No one knows! Or even seems to care! Why do people follow him to their death with religious fervor? What’s with that thing on his face? Why does he sound like Mr. Belvedere? NO ONE KNOWS OR CARES. Maybe Bane’s blandness as a villain is only cast into such high relief because the Joker was just so dang interesting. Bane’s supposed to be the world’s change agent, using violence and terrorism to topple the one percent, end the prison state, get rid of the police, and decry rampant capitalism. You may remember that the Joker hoped to sow similar chaos in Gotham, but not for boring political reasons–he just did it because he wanted to screw with Batman.2

But guys, against all odds and despite my pre-movie trepidations, Anne Hathaway as Catwoman was great! Sure there wasn’t a lot to her, and it seemed like there should be more as even Bruce Wayne kept telling her “I feel like there’s more to you.”3 But she was charming and unexpected in a role that can easily just become “the hot chick in heels and leather who steals things.”

So, sure the movie is fun at times, and sure some of the action scenes are cool, but overall this movie is a disappointment. And it’s OK to say that because its prequel was so freaking good. You can’t cut Nolan any slack after he’s done it before using all of the same pieces.

You saw the first two or you love Batman. Really it’s not so terrible, just don’t go in expecting the successor to The Dark Knight.

If you demand great things from Nolan, a guy who’s talented enough to deliver.

Also, if you have a hard time understanding plain-speaking characters in movies, both Batman and Bane will be unintelligible. Christian Bale’s patented Batman Voice has become a parody of itself, and Bane’s voice was inspired by the king of the gypsies(?).