The art of Deco: Giuseppe Scafidi’s love of food, art, and Sicily

Giuseppe Scafidi loves Sicilian cuisine and Art Deco. Both are on display in his Museum District restaurant. Last year, the native Sicilian converted a 1950s gas station a few blocks east of Devil’s Triangle into a restaurant. The building, adorned in so much Art Deco decor, can make you feel like you’re in Miami’s South Beach instead of the Museum District.

The reason? Art Deco is the chef and architecture aficionado’s favorite style. A mix of several existing styles and periods–from French designers of the 1920s, the German Bauhaus movement, and cultures from around the world– Art Deco is an amalgam of influences that have clashed into one of the most recognizable aesthetics in the world.

Scafidi’s native Sicily is also a clash of cultures–Romans, Byzantines, Arabs, Greeks–that’ve all dominated the Mediterranean island and foisted their customs onto la Regione Siciliana in their respective reigns.

“They created beautiful things: architecture, food, culture,” said Scafidi with a sultry accent that’s endured since arriving in America 30 years ago. “All of this stuff was introduced to us by our dominators.”

Love and the smells of Sicily

Scafidi grew up Sicily’s capital, Palermo, with six brothers and a sister. “Always a lot of love around,” he said. That love remained, and grew, after the death of his mother when Scafidi was a boy. “My grandmother was, for me, my mentor” after his mother passed.

By 16, Scafidi–under the tutelage of his nonna–was making Sicilian staples like pasta alla norma: tomato sauce, fried eggplant, shaved ricotta salata. “I loved to cook,” Scafidi said. “I loved the smell of the flavors.”

Food vendors regularly plodded along city streets on mornings, shouting to any all and within earshot the day’s offerings: Sardine! (sardines); Pesce e lumaca! (fish and sardines), even the occasional Piovra! (octopus). “It was very theatrical,” Scafidi said. “Whatever was available, it was cheap and fresh.” Everything was used; nothing went to waste.

As Scafidi learned to cook, he also learned the origins of common Sicilian ingredients. “Every dominator that we had introduced their own food,” he said. Apricots, sugar, saffron from Arab conquerors. Maize, peppers, tomatoes from Spaniards. Meat from the Normans. 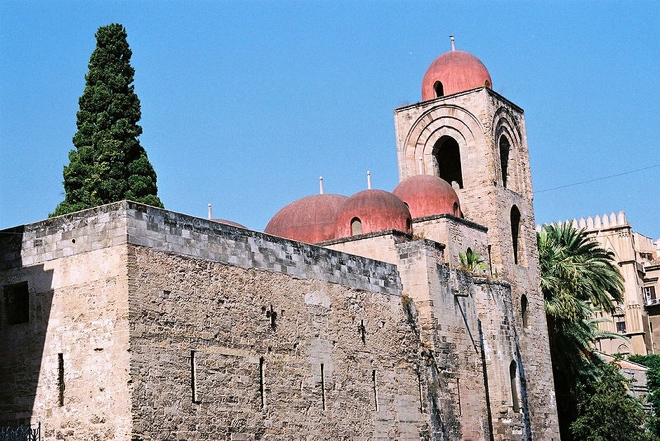 These cultures also imparted their aesthetics on the Mediterranean island, particularly the Normans and Arabs. For instance, The Cathedral of Monreale features a Norman facade, but Arabic art on its interior. Red domes crown cubic towers on churches like San Giovanni degli Eremiti, an Arabic influence that predated the geometric shapes associated with Art Deco.

Cultures, past and present, enriched Scafidi’s senses of taste, smell, and sight. “That’s why I love food and architecture,” he said.

He moved to Charlottesville in 1993 and soon worked at Caffe Bocce. Sometime later, a New York friend and restaurateur asked him to help open Azzurro on River Road in 1995 (among the lasting marks he left on the restaurant is the sun mosaicked on the brick oven).

He later worked at Bella Luna near Brook and Parham roads, and helped build-out Stuzzi on Belmont and Main. But all of these projects involved him working with others. “I always wanted to work for myself [again],” he said. He got his chance when he took over the property at 2901 Park Avenue.

Every detail of the building–both in and out–is Art Deco to the bone: the zig-zag tile pattern on the floor; the geometric shapes of the bar made of plywood, mesh, and a special sand marble cement; wine stored on chevron racks. Scafidi even built a mirror that was inspired by an Art Deco piece he saw at the VMFA.

Scafidi uses subtlety to display his cultural affections. “I do elegant things, not the typical flag,” he said, referring in general to the kitsch sometimes seen in other Italian restaurants. On Deco’s shelves are replica carafes and vases representing Sicily’s deep and varied history. “I don’t expect the average people to understand” or to pick up on the cultural history around them at first glance. “But it doesn’t matter,” he said. The decor is for him.

Deco’s aesthetics may be for Scafidi, but the food–his first love–is for everyone. Menu item descriptions at some restaurants can be a litany of minuscule ingredients and preparation methods. Items on Deco’s menu tease the tongue with just a few words and ingredients. “It’s so refreshing with its simplicity,” Scafidi said about the menu. A simplicity that acutely mimics the geometric lines that comprise the restaurant’s decor. “[Sicilian] culture introduced this food and that’s why I bring this passion into food,” he said.

Pasta alla norma like his nonna taught. The shouts of vendors from his childhood Palermo. The Art Deco he adores. “Everything is connected,” he said.