WSJ writer Katie Rosman made quite a splash with her piece about mommies pretending to be regular people. Serves us right for venturing out of the kitchen. Last week, the Wall Street Journal published an article by Katie Rosman, entitled “The Mommy Business Trip.” Don’t forget to take a gander at the article’s accompanying graphic, retch loudly and violently upon your Internet-reading device, and then do generations of humans a favor by vowing not to let BS like this stand.

Females who have borne children, says Rosman, go buck wild at conferences, which, she says, are less about learning new things and more about letting your hair down. These child-rearing women are finally getting away from the tyranny of those little bastards they dared to breathe life into. With a bag of candy in one hand and an appletini in the other, these “mommies” pretend to be real professionals for a night or two so they can see how the other half lives.

And isn’t it just so precious, the illustration says, that once a year these moms get a morning off from packing lunches to enjoy a remote control all to themselves? Mommies on the loose! Nursing bras on fire! Thousands of clueless men at home ordering pizza and putting on diapers backwards! 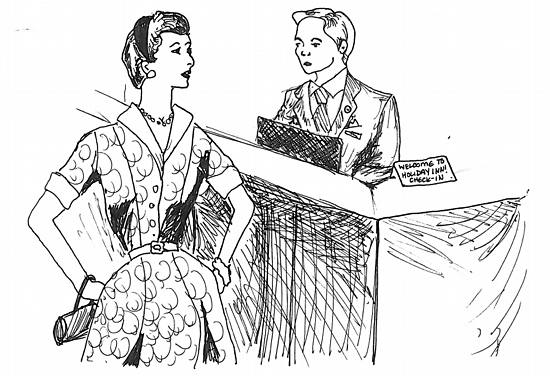 I’ll take a room with a king-sized bed, a minibar full of Riesling, and a preheated oven, please.

Rosman’s article hit a serious nerve with scores of readers, many of whom resent being scrutinized as if they were bizarre sociological specimens. Somewhere along the line, the media’s portrayal of a capable, wise mother figure has devolved into a blubbering, giggling mommy who only shows any spunk when attacking one of her own kind.

“But was it the chicken or the egg that came first?” some ask. Plenty of women giggle and blubber, just as plenty of men don’t know how to fold laundry. However, we’re a culture that’s progressing, albeit slowly, and this constant bowing to harmful stereotypes is not only offensive–it’s lazy, sensationalist journalism. And it just makes the problem worse.

On the flipside, individuals of both sexes must commit to being pavers, not potholes, on the bumpy road to progress. Men, learn to recognize these moments where the media has taken a step backwards, point them out, and refuse to accept them. Women, don’t fall into the trap of defining yourself in opposition to other females. When you’re the first to attack your own kind, others will follow suit.

I’m talking to you, Katie Rosman, and I sincerely hope you’ve learned something from this experience.

No, moms aren’t curious specimens of an odd human breed. They are real people with jobs who happened to have also birthed or obtained a child in some manner or other. If those jobs are at home instead of in a cubicle, moms are just as much entitled to have fun with other like-minded people. You may have read about this phenomenon: it’s referred to as “socializing” or “blowing off steam” or even “being a regular human.”

I’ve been to about 20 conferences, most of them during my tenure in higher ed administration. At each one, men and women, old and young, married or un-, enjoyed the novelty of their hotel room. We went to parties. We were encouraged to tweet with a specific hashtag. We watched HBO. We ate too much and drank even more. It turns out it’s really, really fun to take a break from working your ass off, preferably when you’re able to expense your meals. And that’s something every single person can say.

But we also networked, learned a lot, and grew professionally. I know that’s shocking, considering some of us had children at home. We must have been completely out of our element, what with all the conversations with grown-ups. The quotes cherry-picked in Rosman’s article center only around the glee of having a couple of days off from parenting and ignore professional utterances completely, though the women she interviewed insist those utterances were there.

I attended a women’s college that turns each of its alumnae into finely-tuned misogyny-destroying machines. As a result, my eyes are pretty sharp when it comes to spotting gender discrimination, and I’ve gotten flack for it in responses to my critical pieces (read: people call me lots of names in movie review comments when I point out the splendid array of instances in which filmmakers, screenwriters, and viewers are sexist choads). It saddens me that people bother to argue against gender equality, because that’s all feminism is, folks. Just the constant struggle to even things out.

As the mother of a young child, I’ve only lately become aware of the Internet’s intensely competitive and judgmental mommy culture. The backbiting and one-upping repulses me so much that I have gone off the reservation. I don’t do any research anymore about sleep cycles or developmental toys. Instead, I go with my gut. I feed my kid good food, dress him in clothes I think are cute, and make sure the various death traps in my house are off limits. Then, I pay someone else to do all the baby research. Two people, actually. His childcare provider and his doctor. Those are their professions. I have another profession. We’ve got a good thing going.

Yet be wary if you’re a female with children who works at home, because the world clearly still views your job as a cute, play version of everyone else’s. And don’t try to blame it on the damaging effects of feminist backlash. This is the same pure, homespun sexism that made it so difficult for women to infiltrate the workforce in the first place. The gentler sex is unsuited for life outside the home, so if you’ve forced your pretty little self to embrace manly visions of professional grandeur, you’re already beyond saving. But the Wall Street Journal can still coddle the rest of you sweet things who want to pretend to work like the big boys. You go girl, Rosman says. Go get your groove back with your gal pals and come back with all of that independence out of your system. You’ve got school buses to catch and meatloaf to make.

I call for journalists everywhere to refuse to indulge their media outlets with damaging, misogynist propaganda. Look more closely at what you’re saying in your pieces, and ask yourself if you’d dabble quite as blithely in stereotyping any other marginalized group.

I think you wouldn’t. But what do I know. I’ve got two X chromosomes and a child. I’m just lucky to be here.