A treehouse, a freedom-hungry 13-year-old, and a couple of very understanding parents. When I was 13, I built my own treehouse. It was a glorious, hulking eyesore, and I loved it.

OK, so I had a little help, in that I couldn’t quite lift the pallets that high by myself. But other than the heavy lifting of the first and second story1 I secured the treehouse in place, built the walls,2 and rummaged the trash of the neighborhood for additional lumber. Since we lived in a development that was still being built at the time, there were plenty of piles of debris3 for the ambitious youngster.

My point is not how awesome I was for building my treehouse, but rather how awesome my parents were for giving me that level of freedom to create a total monstrosity in the yard–and to let me scavenge and go wild with my project as only a teenage girl desperate for her own space can. I wasn’t given a ton of freedom as a kid or teenager, so what freedom I did get, I basked in. In this case, it was serious business. I checked out A Kid’s Guide to Building Forts4 from the library on a bi-weekly basis, and I memorized its pages like Bible verses. Fashion/pop magazines weren’t even on my radar.5 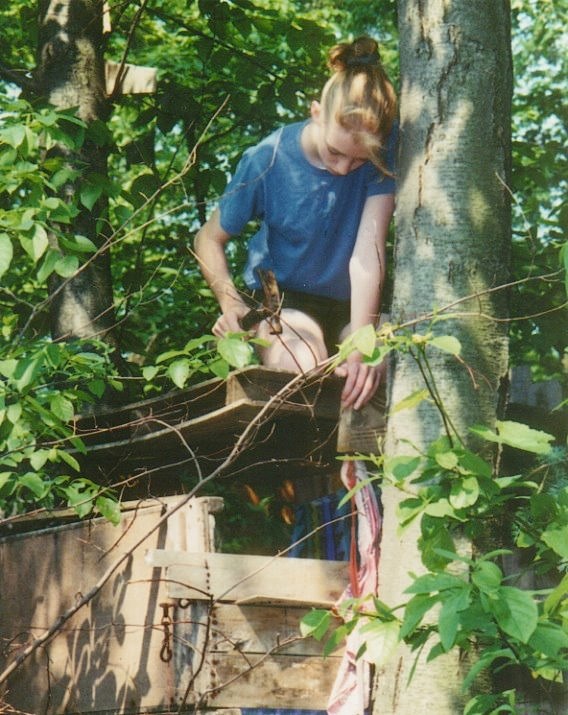 And the thing is, the joy I felt in building that treehouse and reading books on the second story all summer is something that’s stayed with me. In giving me permission to essentially hurt the resale value of our house, my parents gifted me with creative freedom beyond just a small craft–it was the creative freedom to make my own space and hold some authority over it. So much so that when the time came to move, and the buyers wanted to write up an addendum that would require my parents to tear down the treehouse prior to selling because their pweshus children might “get hurt” on “safety hazards” like “rusty nails” and “splinters”, my parents refused. On one hand, I realize they probably did so because tearing that thing down was going to be a pain in the ass. On the other hand, I also like to think they refused on the grounds that the move was breaking my heart enough as it was, and watching my treehouse get torn down would spiral me into the depths of teenage agony that nobody would wish on their household, like ever. But no matter the case, they put their collective foot down, and my sacred space was saved. Or at any rate, while I know it was torn down shortly after they moved in, at least I didn’t have to watch.

The experience of treehouse-building (and the freedom that came with it) also taught me some basic shop skills (in so far as I was learning to use tools6) and, in general, fend for myself within the bubble of relative safety that was the woods behind our house. Having the opportunity to roam the woods with my best friend was fantastic–sure, we were on the border of game lands, but we just wore bright colors and checked back in every so often. We poked mushrooms and ran from them when they poofed out funny powder. We climbed huge boulder piles and created songs and tried to talk to mourning doves for hours. And we did it mostly alone.

To be clear, I’m not advocating sending your kids into the woods, just like that. As Sam pointed out last week, we live in a dangerous world where being a girl is, simply, statistically dangerous. Being a not-city kid is a vastly different experience from being a city-kid. If I were a Richmond parent, would I send my tween girl off to Texas Beach alone to roam? Hell no. But within the context of my early years, a certain amount of freedom that I did have to explore the woods with my friend was invaluable. It sparked our creativity and let us be unscheduled and free-range, with sunny fall days stretching on into forever-long golden afternoons.7

Maybe those days are things of the past as it becomes more clear just how dangerous the world can be. While it’s important to keep teenagers safe from the harm they may or may not be aware of (and keep them safe from themselves and their brains that are so, so not fully developed), at the same time, having a slightly longer leash was really, really awesome and rewarding in the long-term. Even if it’s just the freedom to create a truly horrific safety-hazard treehouse in the yard, maybe consider not worrying about resale value as much…and just let them go for it.

(And also maybe make sure they’re up to date on their tetanus shots.)