Venues along the First Fridays Art Walk corridor will broadcast TED talks to the public this Thursday evening as part of the TED TalkWalk, designed to promote TED and next year’s TEDxRVA event.

“We really want to draw more awareness to TED and what a wonderful platform it is,” said Risa Gomez of TEDxRVA, the local organizers of Thursday’s event. “There are people in Richmond who are complete TED fans already, but there are people who don’t know what TED is.”

The TED TalkWalk, which Gomez calls “very much a community-curated event,” will give existing TED fans a new way to experience the talks, while giving TED novices a community-centric way to view them for the first time. “You get to watch the TED talk with like-minded people” as opposed to watching them alone as most people do, Gomez said.

Seven venues have each chosen one talk from TED’s extensive video library that they’ll broadcast on televisions or theater screens:

“They’re free to choose whichever TED talk is compelling to them,” Gomez said. “I know that the Coalition Theater has chosen a very funny one.” Each venue will screen their talk beginning at 6:30 PM, then repeat every half hour until 9:30 PM. 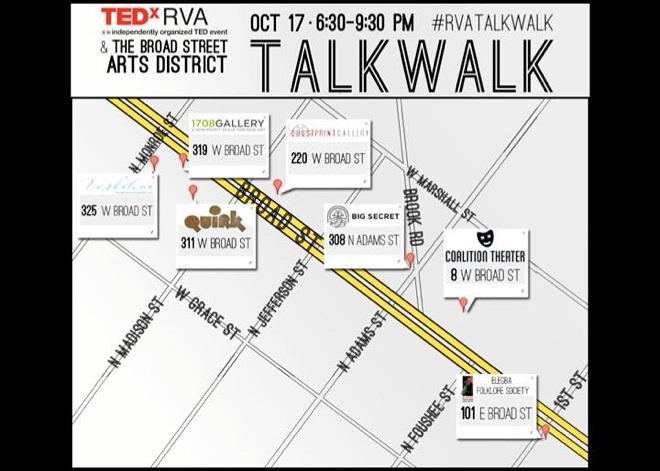 People taking part in the TalkWalk simply move from venue to venue throughout the evening, watching each venue’s talk as they go along. “There are so many talks about art and engaging the community,” Gomez said. She’s confident that the talks each venue chooses will be interesting and entertaining. Participants are encouraged to share their thoughts and impressions of them on social media using #RVATalkWalk.

Gomez said Thursday’s event isn’t entirely about TED. It’s also about promoting businesses and galleries along the First Friday Art Walk corridor. “We want to be able to highlight all the great things going on on Broad Street,” she said.

Gomez said details of the 2014 TEDxRVA event will be announced in early November.