Here we are, ladies and gentlemen. The week battle of Supper Punch!!! Last week was very close — tied until a plea via Twitter brought in some final votes — but in the end, Carnam pulled it off, once again. She’s unstoppable, that one.

Voting for Supper Punch!!! Week 9 is now closed. Tune in tomorrow to find out the winner of this particular battle AND see the final results!

Here we are, ladies and gentlemen. The week battle of Supper Punch!!! Last week was very close — tied until a plea via Twitter brought in some final votes — but in the end, Carnam pulled it off, once again. She’s unstoppable, that one.

So here we are, the standings as we go into this, our final battle in a war for culinary supremacy:

Now clearly, as Carnam now has four victories, she’s going to be the overall winner, regardless of what happens this week (unless there’s some sort of scandal that pulls her from the competition, but we don’t see that happening.) However! It’s still up in the air as far as 2nd, 3rd, and 4th place goes. So we hope you’ll stay with us.

Take a look at what our chefs have to offer as their “Last Supper” if you will. They’ve also turned the camera around to give you an elusive glimpse of each of them in their natural habitats. Exciting! 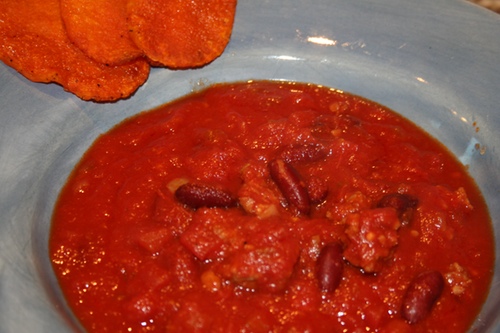 This week my contribution was cooked in a (gasp) crock pot. I just put a few cans of tomatoes in a crock pot along with kidney beans and my new addiction: Belmont sausage. I cooked the Tuscan variety with garlic and shallots and, after sampling a bite I realized I could have eaten the whole pan. To the chili, I also added some celery, cumin, cayenne powder, and a pinch of sugar (because that’s what someone on the Cooking Channel told me to do). After slowly cooking for about 8 hours, the chili was hot, hearty, yummy and satisfying. And, because of the massive quantities I prepared, we have plenty in the freezer for another couple of meals.

I also made some butternut squash chips as a side. I sliced rounds from the neck of the squash, poured on some olive oil, salt and pepper and baked in the oven for about 20 minutes. Next time I’m borrowing someone’s mandoline, because I think thinner slices would get crispier and I almost lost a finger trying to cut them as thinly as I did. You guys really should try and make these. My friend told me about them after her husband made them the other night (he fried them, also a great option) and I couldn’t wait to try them. Definitely worth the almost slicing my finger thing. Oh, and my kids thought they were potato chips. Win.

Time spent
8 hours in the crockpot for the chili, 20 minutes for the chips 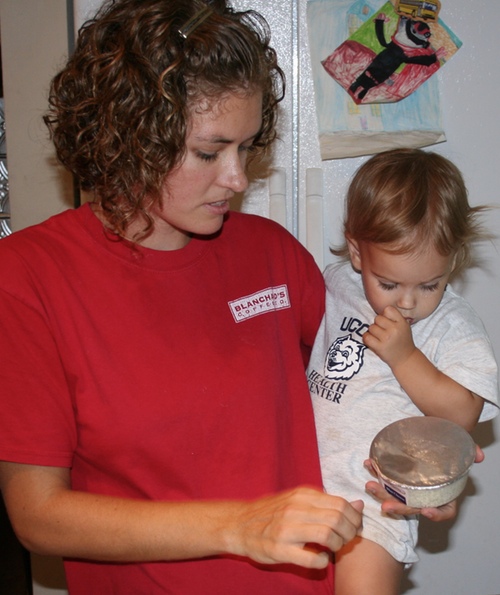 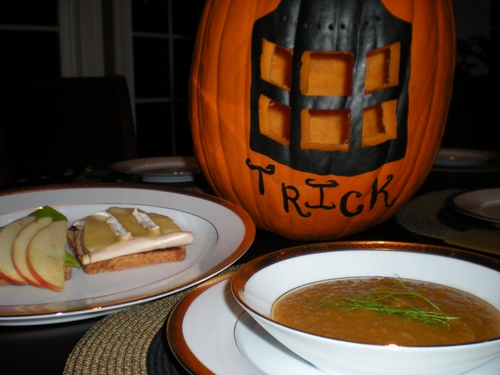 This week I opted for the ever-popular (at least at our house) soup & sandwich combo. I went with a seasonal favorite: pumpkin-ginger bisque. This time I took it up a notch or two and added Harvest Moon Pumpkin Ale and Blenheim Ginger Ale, along with some fennel, shallot, cardamom and star anise. I used pie pumpkins, not carving pumpkins (there’s a difference), and roasted the flesh with some French fingerling potatoes in a 325 degree oven for 40 minutes. Meanwhile, I sautéed the sliced fennel bulb with diced shallots in some olive oil until soft, then added the ginger ale and Harvest Moon, simmering until the liquid was reduced by about 50%. The roasted pumpkin and potatoes went into the slow cooker along with the fennel-ale mixture and about 4 cups of vegetable broth for 3 hours on high. Before serving, I blended the soup until it was about the consistency of applesauce, and added a fennel frond to each bowl for garnish.

Providing great accompaniment to the bisque were turkey, brie and apple sandwiches with “Wich-Craft” cranberry-apricot chutney. My colleague, Sarah, gave me a jar of this amazing concoction of delight, and I was dying to try it out. Honey smoked turkey was the obvious choice, along with some brie and Honeycrisp apples – both sliced thin – and crisp Boston lettuce. I warmed the slices of turkey topped with the brie while toasting whole grain bread slices, which got a thin layer of the “Wich-Craft” chutney to go under the turkey. My kitchen assistant, and resident foot-warmer, Rex, really enjoyed the turkey chunks that somehow kept getting “dropped” off the counter during the process. He makes sure crumbs never make it to the kitchen floor. 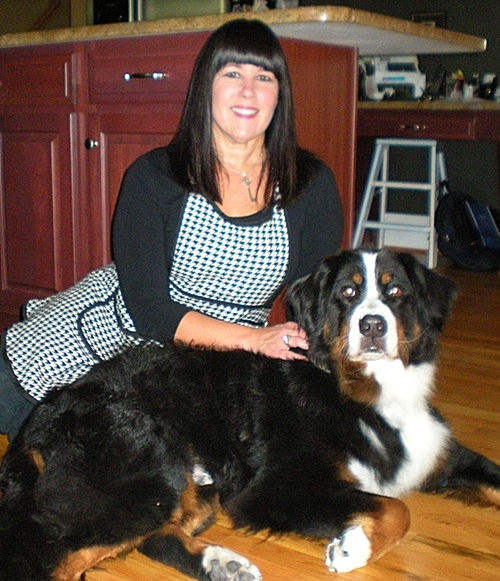 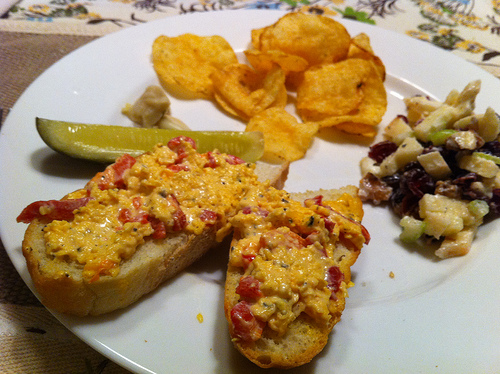 In honor of this dang Pimento Cheese, Please! documentary effort that’s been floating around, I decided to make my own Pimento Cheese for dinner (the Last Supper you might say). Pimento Cheese is delicious and simple to make. Don’t let people tell you that you need to make your own mayonnaise — just use Duke’s. It’s made in Richmond, just like yours would be. Here is how to make pimento cheese:

To go with the cheese I made a quick waldorf salad (which has a a weirdness to deliciousness quotient of about one), some chips, and some of these BANGING home made pickles that just finished up.

Simple, easy, and delicious. THIS IS MY STYLE, PEOPLE. 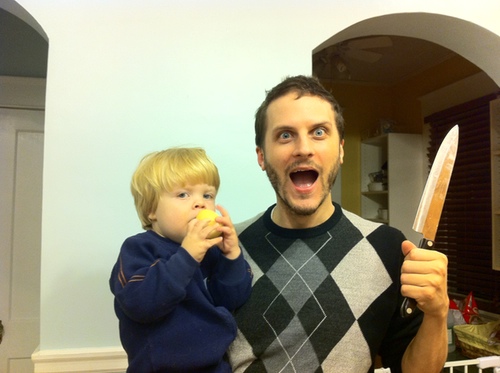 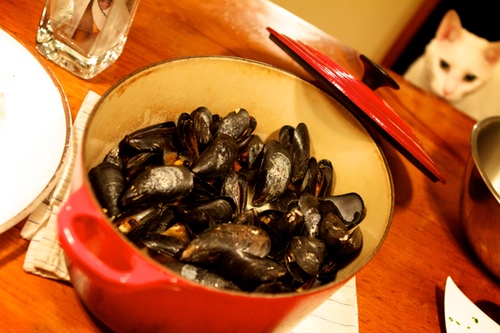 How much fun has Supper Punch been?! Susan and I have absolutely loved every minute — we’ve spent more time in the kitchen, tried more recipes, tasted some great things, ate in the dining room for a change, and then there’s the “its 7pm on Sunday night and we had work meetings or eaten out every night this week” panic. Ok, so maybe not every minute was a stress free stroll through culinary dreamland. There were the failed attempts, the “seriously, you’re taking another picture?” glances and the dishes. Oh the dishes! But none of those out shadow the food; it has been 9 weeks of great food, great posts and great voters.

This week, we were feeling a little nostalgic about the end of Supper Punch. And what goes better with nostalgia than a side of wistful memories of Paris? When Susan and I lived in Paris, there was this amazing Belgian-themed bistro around the corner called Moules and Frites. The place took its eponymous name seriously, only serving mussels and fries, in various Flemish and French styles. This week, we made our take on that meal. The mussels came from Maine — not exactly local, but seasonal nonetheless. While they sat in a bowel of water to purge, I sauteed some of my home cured chorizo, 7 cloves of garlic, and a generous pinch of chili flake in dutch oven. Next went in about 10oz of Belgian golden ale which I let boil and reduce to about half. That set up held on the stove top while we went to work on the rest.

Belgians claim to have invented the fry. But, who am I to quibble over the semantic origins of something so perfect? The secret to any good fry – Belgian, French or otherwise, is the double fry. If you want to know more about the double fry technique, check out Ross’s entry from week 2.

One of our favorite sides is a really simple hearts of palm salad. Step 1, remove and drain hearts of palm. Step 2, slice in half. Step 3, dip into homemade garlic aioli. The touristy but competent and tasty Bistro Francais on M Street in DC’s Georgetown does an awesome version. Aioli also happens to be the perfect dipping sauce for fries. In a food processor, combine 1 clove of garlic, 1 egg yolk, 1 table spoon of champagne vinegar and three 3 spoons of olive oil. Wizz it all together to until it is the consistency of mayonnaise.

For a starter, I shucked some Swanscott oysters from Virginia’s eastern shore. I’m utterly amazed at the verity and quality of Virginia oysters that have come to market over the last few years. I topped these salty gems with a mignonette: diced shallot, black pepper and red wine vinegar. Mignonette does this great trick where it mixes with the salt of the oyster liquor and the unctuousness of the oyster to make a vinaigrette of sorts as you eat them. It is one of those complete mixes of tastes: salty, sweet, bitter sour, and umami.

Just before sitting town, I cranked up the heat on the dutch oven and tossed the mussels in. It only takes about 2 minutes until they yawn open to great their steamy surroundings. As they opened up, I tossed in a huge dollop of butter. We took them straight to the table and began fighting over the baguette. Nothing beats sopping up the juices right from the pan! Mussels have a rich, briny flavor that is just the good side of funky. The French would have us believe bivalves are best done in white wine with lemon. When you do them in Belgian beer there is a subtle sweetness and bitterness that combine with the flavor of the sea into something sublime. We washed it all down with a Rochefort #6 trappist ale. What a great send off for the best 9 weeks of food fun we’ve had in years! 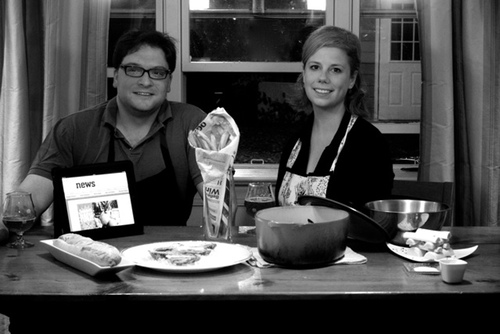 Have at it, RVANews readers. We can’t wait to see how this turns out.