He did it! He finally did it! After getting SERVED by his opponents for five weeks in a row, Ross Catrow made it on the scoreboard last week. Way to go, buddy! Let’s see if he can do it again this week…

Voting for Supper Punch!!! Week 7 is now closed. Congratulations to our winner, Jennifer Carnam! Tune in tomorrow for Week 8…

He did it! He finally did it! After getting SERVED by his opponents for five weeks in a row, Ross Catrow made it on the scoreboard last week. Way to go, buddy! Let’s see if he can do it again this week… 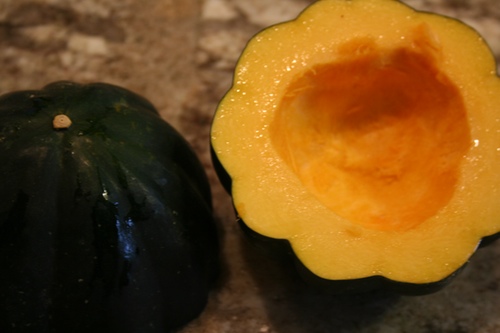 Remember that leftover chicken and broth from last week’s meal? Well, this week I turned it into some chicken pot, chicken pot, chicken pot pieeee. (If you don’t get that reference, feel free to google.) I sauteed some carrots, peas, mushrooms, and acorn squash in chicken broth and then I added some thyme from our garden. After that I topped the whole thing off with some dumpling-like dough made from quinoa, tapioca, and rice flours. Great comfort food for a cool fall night. 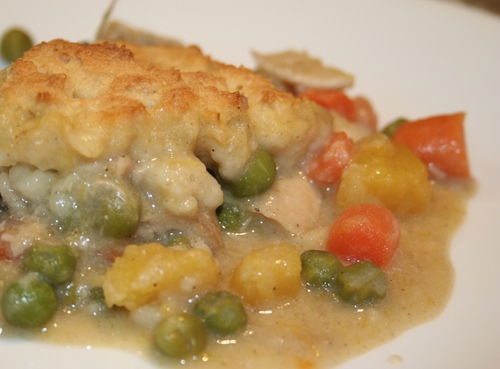 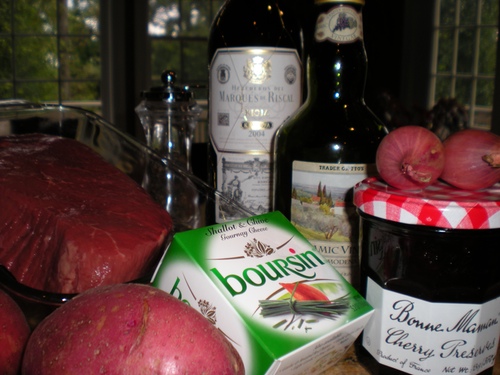 As much as I enjoy cooking for my family, my kitchen adventures are even more fun when I can entertain guests. This week, my lovely friend Jeannea was visiting from Atlanta, so she joined us for Supper Punch! Sunday evening. This week I resurrected a tried-and-true family favorite from my recipe stack – Cherry-Balsamic Glazed London Broil. Simple but elegant, London Broil is lean and delicious, whether you cook it on the outdoor grill or broil it in the oven. The trick is marinating it to tenderize the meat and avoid toughness. I started with a 2 lb. London Broil that I marinated for about 4 hours in the following: cherry preserves, balsamic vinegar, dry red wine (I used a nice Roija in a very pretty bottle), a little bit of olive oil, and some sea salt and fresh ground pepper. I broiled (since it was raining outside) the marinated meat about 10 minutes each side for a nice medium-rare finish. Meanwhile, I added some finely diced shallots to the marinade and reduced it over medium heat. Once the meat was cooked, I whisked in the drippings from the broiler pan into the cherry balsamic sauce and drizzled it over the thinly sliced meat just before serving.

The potatoes couldn’t have been easier. I simply boiled, drained and mashed them, adding about 1/2 package of Boursin Shallot & Chive Gournay cheese, a couple teaspoons butter, and a splash of fat free half and half. A nice rosemary & sea salt boule and the rest of the Rioja rounded out this meat n’ potatoes entrée. 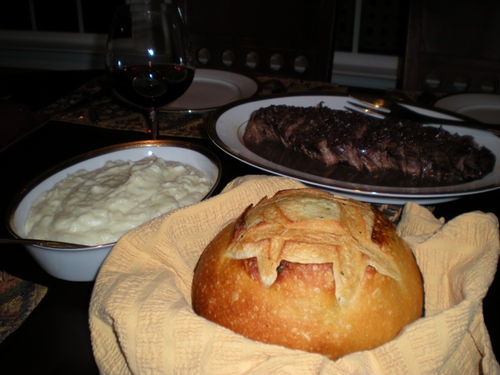 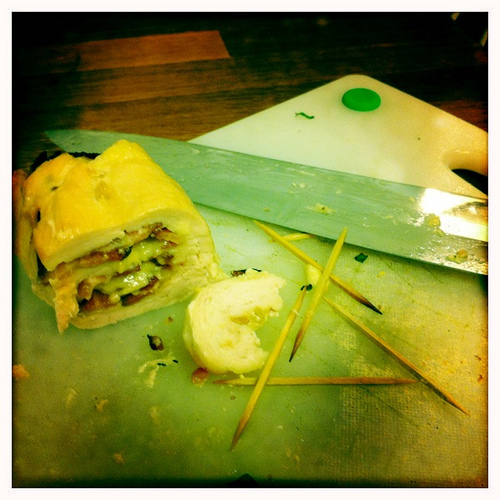 Fall continues its onward march and I keep making warm delicious food. COULD IT BE ANY BETTER?

My wonderful wife, who hates soup, casually asked me last week “What’s in minestrone soup?” After I told her the gist, she said that it sounded pretty good. Awhaaaa? Believe you me, the chances to eat soup around my house are rare indeed, so of course this week I made a minestrone soup. All was right in the world.

Seriously guys, here is how you make soup: put some broth (or water) into a crock pot, add a couple cans of tomatoes, add any beans or vegetables you can find, and let it sit all day. It really is that simple. You’ll probably want to throw some noodles in there too. If so, cook them separately and add them about thirty minutes before you finish cooking — you don’t want them to get soggy.

Hey, this was vegan! Until I poured in the bacon grease! Oops!

Possible twists: sausage, chicken, spinach (add this near the end of cooking), curry!

The other thing I made was this chicken, bacon, cheese roll up thinger. I am a chicken-hater. It smells weird, looks weird, and tastes boooooring. Someone convinced me to try chicken from the Butcher — which I totally did! Not only did it smell edible raw, it tasted great.

This jam was super easy too: pound out a chicken breast until it is flat. This is fun and awesome. Put down a layer of bacon (I pre-cooked mine a bit and then added the grease to the soup) and then a layer of cheese. Roll that sucker up and FASTEN it with tooth picks. Bake it until it is done.

I guess traditionally you’d bread and fry this, but I was too lazy. 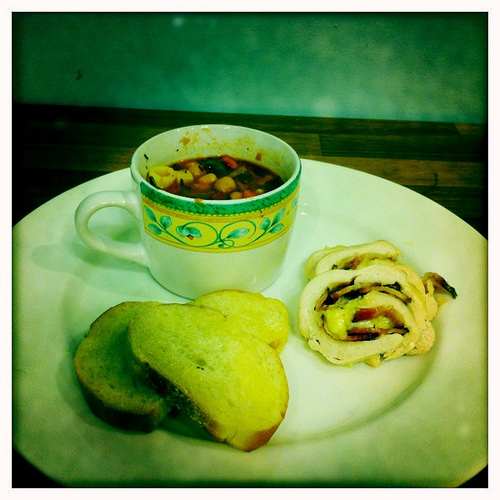 Time spent
Prep: 40 minutes
Cooking: About 5 hours for the soup (in the crockpot), about 40 minutes for the chicken 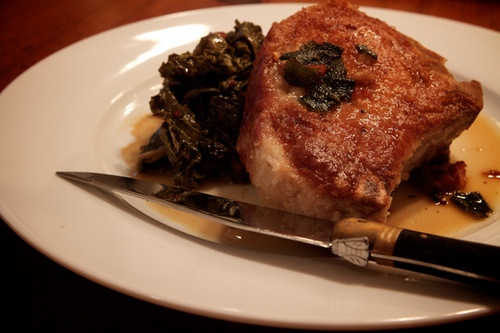 Boom. That just happened. A crispy, fried, southern to the core pork chop! I served it leaning lazily alongside some greens, kale in this case, that were cooked low and slow. Add some sweet tea and oooo eeee that just tastes like the South. The greens started about 30 minutes before the pork with yet even more pork. Some home cured prosciutto was rendered in a pan along with garlic and chili flakes. The kale went in along with some stock and water and was left to simmer for an hour.

CCL, remember those letters. Look for a small tent, tucked away somewhere on odd weeks at the South of the James Farmers Market. The folks from CCL farm produce some of the finest pork I’ve ever worked with. These CCL chops were brined for twenty-four hours in a salt water brine (50 grams of kosher salt to 1 liter of water). When I plan ahead, I often brine pork for even longer, up to five or six days; the English call it pickling though the result is not at all sour. Quite the contrary, brined pork tends to taste sweeter and infinitely more juicy. After being plucked from their sea water bath, they got a very light coating of flour and panko bread crumbs – about a 50/50 mix, just a dusting.

My trick for pork chops is to start them with the fat cap down. I carefully balanced them, standing on ends, in a medium hot cast iron pan. For about seven minutes I let the fat render out and get nice and crispy. Not only does that make the fat crispy and tasty, it provides a nice cooking medium – hey, I never said they were low fat. After laying over, they spent about 5 minutes on each side until they reach and nice medium of 135F.

BBQ sauce may be traditional, but I’ve found some inspiration in Italian versions of pork cutlets – lemon and some sage really cut through the richness. After removing the pork to rest, the juice of two lemons, a splash of white wine and 2 table spoons of chicken stock and some sage went into a pan and reduced by half. Dare I say it, porcine perfection! 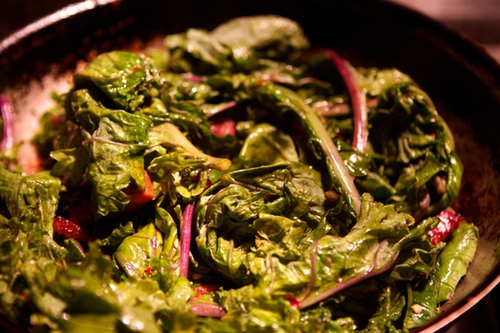 There you have it — leave your votes in the comments, folks!

There are 45 reader comments. Read them.