Thanks to everyone who voted in week 1. My, you all have some opinions about food, don’t you? Come find out who won last week and check out the goods for round 2. You will not be disappointed. Trust.

Voting for week 2 of Supper Punch!!! is now closed. Our winner was… Jennifer Carnam! Congratulations to Jennifer and thanks to everyone who voted. Tune in Wednesday for week 3. It’s gonna be great.

Thanks to everyone who voted in week 1. My, you all have some opinions about food, don’t you? In the end, Nick Dawson walked away victorious, claiming the hearts of RVANews readers with his home-cured chorizo and pickled tomatoes. This puts our standings at:

Each week, for local food enthusiast submit two photos and a brief commentary (including ingredients and prep time) on a recently-completed dish of their choosing. You, our readers, will then declare a winner for the week by voting in the comments. Your vote can be based on whatever you like: creativity, good use of local products, what you want to put in your belly at that exact moment, whatever.

Our competitors:
Sarah Bonkovsky, tireless contributor to Fan of the Fan and a gluten-free mother of three who loves to eat food from her own and nearby gardens. She also describes herself as “slightly lazy, distracted, and messy in the kitchen.” Don’t let her self-deprecating tone fool you — she can BRING IT.

Let’s get moving on week 2. The chefs have delivered on this one — we can’t wait to see how the votes go. 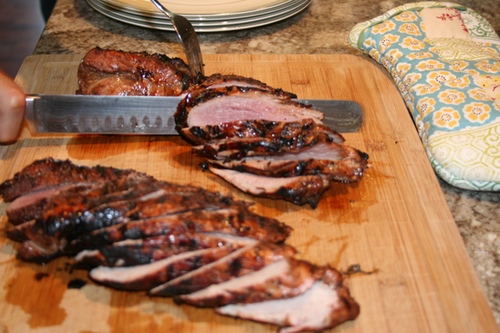 This meal began with one of my favorite pastimes: eavesdropping at the park. One woman was raving about the fig and raspberry jams Bee-Haven sells at the Monument Market. Among the many yummy meal options mentioned was the idea to put their fig jam on top of pork chops. Salivation. Later that same day, a friend dropped off two jars of homemade jam, one raspberry and one fig. What does it mean? So intense.

Obviously it meant I needed to use this newly acquired jam to make an awesome dinner. Instead of doing pork chops (which I tend to overcook), I decided on my go-to cut of pork: the tenderloin. The kids love it (even though my oldest dips it in ketchup). They call it “pork chickey” and eat every last bite on their plates. I try to put it in a simple marinade early in the day and then it’s ready to grill around suppertime. And, in the time it takes to grill, I can put together some quick sides. This time it was marinated in a balsamic, rum, and fig jam mixture. While it was being grilled, I boiled the marinade for about ten minutes in order to reduce and thicken the sauce (and kill bacteria). If it grosses you out to use the same sauce you marinated with, just double the amount of your marinade and reduce/boil the portion that did not come in contact with the raw meat.

This time the side that I chose was some Swiss chard from our garden — I love being able to walk out of our back door and pick something for dinner. I sauteed some garlic in olive oil, threw in the chard, cooked until wilted, then added some chicken broth, and cooked until that evaporated. Then I added some blue cheese to the top, because who doesn’t love blue cheese? (If you say you don’t love it, I won’t believe you.)

Our friends brought the potatoes with them — I shared the ingredients because I thought they were delicious, simple, and that touch of honey was genius. My son had several helpings of the “fancy french fries”. 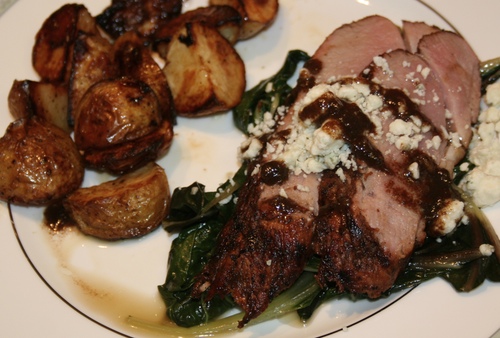 Time spent
5 minutes to prep marinade; 6 hours for pork to marinade; 18 to 20 minutes to grill the pork; 5 to 7 minutes to cook the Swiss chard while the pork was being grilled 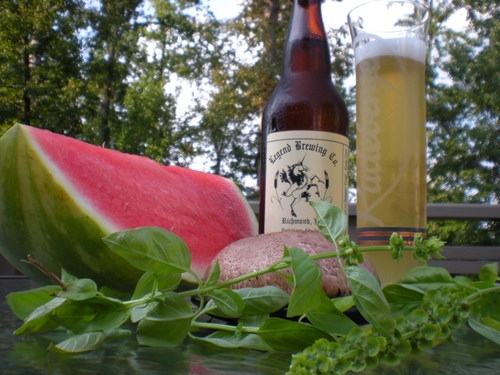 Spending a lovely (and relatively balmy for RVA) afternoon with friends outside at Legends last Friday got me thinking about cooking with beer. Legend Brewing Co. Belgian White Ale is one of my favorite summer brews, so I got a bottle to go, and decided to try my luck with some scallops, portobello mushrooms, and Canadian bacon over the weekend.

Step one was to briefly poach the scallops in some of the Belgian White (warmed to steaming, but not bubbling) while sautéing thinly sliced Canadian bacon and thickly sliced portobellos in a little olive oil. Meanwhile, I sliced some fresh basil from my deck herb garden into skinny strips to top the mushrooms. Next, I sliced the poached scallops in thirds (like silver dollars) and added them to the cast iron skillet with the bacon, sautéing until they started to turn gold and fray at the edges, then placed them on top of the portobellos. The final step was to deglaze my ancient cast iron skillet by whisking a few tablespoons of the warm ale in with the bacon, then drizzle the bacony beer sauce over the mushrooms and scallops. Along with some icy cold Belgian White and fresh, juicy watermelon, this turned into the perfect light dinner to christen our newly refinished deck. 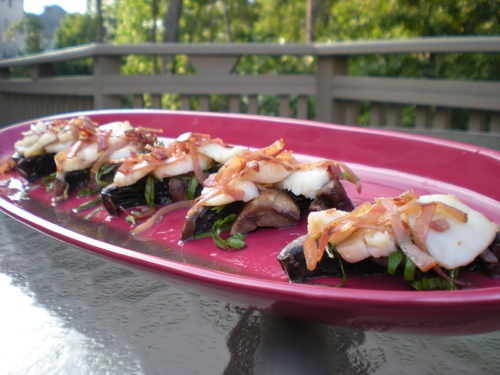 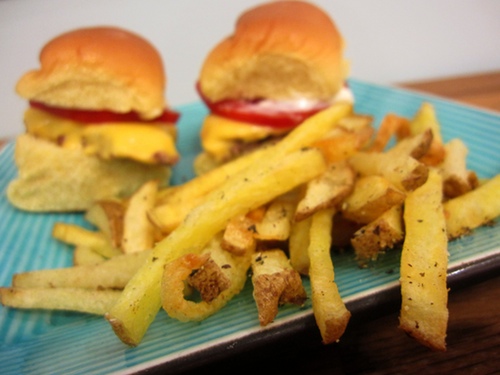 This is actually a recipe from RVANews and the Sausage King of Richmond. The title doesn’t lie: it really is the perfect slider. I’ve given up on huge, dry burgers loaded with toppings. Give me something thin and greasy — this is my definition of a great burger.

The burgers are pretty simple, although I hand grind most of my ground beef which adds a level of COMPLEXITY. This particular batch was local grass-fed sirloin to which I added a reasonable sized chunk of bacon fat (all available at the awesome Belmont Butchery!).

While I was grinding the meat I was sauteing some chopped onions in a bit of the bacon fat. I have no idea if this makes a difference, but hey, I had the bacon fat so why not?

Add the beef, onions, some water (yeah weird I know), salt and pepper, and roll it out real thin in some plastic wrap. You can attempt to grill this, but — as I hate grilling — I just pan fried the bad boy. Serve on Martin’s potato rolls OR ELSE.

While the meat process was going down I was busy double frying the hand cut french fries. I still haven’t got the timing down but they always turn out delicious.

And yeah, that is American “cheese” on the sliders. I realize this totally goes against my no-chemie stance, but dang. These just wouldn’t be the same without it. 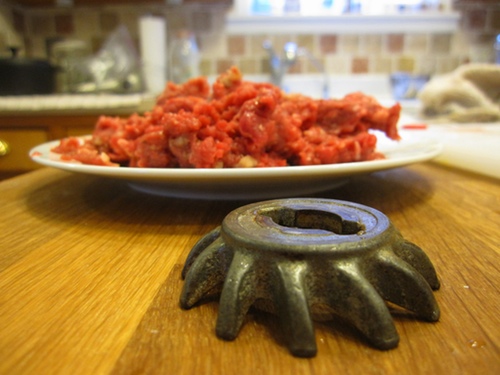 Time spent
The whole shebang took about an hour.

Dawson: Confit of Lambs Tongue with Potatoes and Brussels Sprouts 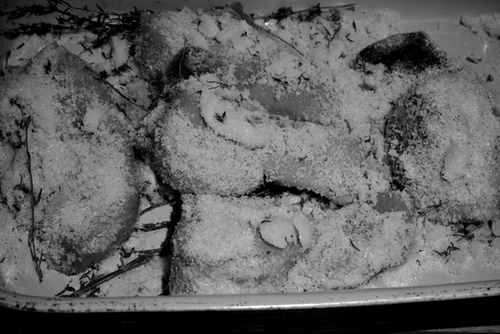 Ok, I’ll admit it. There is a certain stigma with offal. The problem with the 5th quarter, as our Italian friends often refer to organ meats, is they remind us so much of…well… us. But before you go sticking your tongue out in disgust, I implore you to try an experiment with me. Every time I use “tongues” below, substitute “duck leg”. Then, ask yourself, what is really different about eating the equivalent of a quadricep vs. any other muscle?

After the silence of these Virginia lambs, the tongues spent what can only be likened to a weekend at the spa: 24 hours in a salt water bath before being blanketed in a liberal snowfall of coarse kosher salt, thyme, and garlic over night. Next they went into a vacuum bag with some black tea leaves, juniper, and bacon fat, and took a plunge in the sous vide hot tub for 10 hours at 162 F. While they rested, some par-boiled potatoes, straight from my dad’s garden in Bedford county, were glazed in the cooking liquid from the tongues. The dish came together with some garlicky, sticky, slow cooked brussels sprouts. Some fennel was warmed in the separated bacon fat. The tongues got a final quick fry in some butter and were plated with a reduction of the cooking liquid and a whole grain mustard vinaigrette.

If I could have, I would have cooked the tongues longer. You’ll be surprised to find out there are not a lot of guides for sous vide of lambs tongue online. I think 18 hours would have made them meltingly tender. As it was, they had the texture of a medium rare steak, not unpleasant at all. 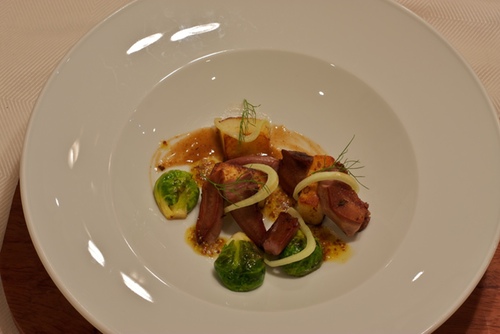 Time spent
Total time is really 2 days, from the brine through the confit process. However actual time in the kitchen working on the dish was closer to 2 hours total.

There are 47 reader comments. Read them.