First, there was Garden Wars where three gentlemen engaged in an epic battle for agricultural supremacy. Now, there’s Supper Punch, an equally epic battle, but this time between four local food enthusiasts and the cuisine they lovingly put forth each week.

Voting for week 1 of Supper Punch!!! is now closed. Congratulations to our winner, Nick Dawson! And a special thanks to everyone who voted. Tune in on Wednesday, September 1 for the next round.

First, there was Garden Wars where three gentlemen engaged in an epic battle for agricultural supremacy. Now, there’s Supper Punch, an equally epic battle, but this time between four local food enthusiasts and the cuisine they lovingly put forth for consumption.

Each week, our competitors will submit two photos and a brief commentary (including ingredients and prep time) on a recently-completed dish of their choosing. You, our readers, will then declare a winner for the week by voting in the comments. Your vote can be based on whatever you like: creativity, good use of local products, what you want to put in your belly at that exact moment, whatever.

The competition will go on for a total of nine weeks. The winner will be awarded with glory and honor. And hopefully our readers will walk away with a little culinary inspiration.

Before we begin, let’s get to know our competitors.

First up, we have Sarah Bonkovsky, tireless contributor to Fan of the Fan and a gluten-free mother of three who loves to eat food from her own and nearby gardens. She also describes herself as “slightly lazy, distracted, and messy in the kitchen.” Don’t let her self-deprecating tone fool you — she can BRING IT.

Next up is Jennifer Carnam, Vice President of Marketing for the Richmond Metropolitan Convention & Visitors Bureau (RMCVB) with 30+ years of experience. She’s a California native, a Boston Red Sox fan (by marriage), wife to Allyn, mother to Lex, and step-mother to Lincoln and Todd. She is also the most fun.

Then we have Ross Catrow, co-founder of local web design firm PharrOut, lover of beer, butter, and his family. He’s perhaps best-known as the master and commander of the good ship RVANews. Occasionally he takes a picture or two (you can see documentation of his Supper Punch candidates here).

Finally there’s Nick Dawson who recalls early memories of watching PBS cooking shows while home sick from school. By day he works in hospital administration, focusing on improving on the patient experience; by night he is a fan of all things porcine, a curer of meats, a producer of pickles, and a lover of simple foods done very well. He describes himself as “passionate about local, sustainable foods and their producers.”

Now that everyone has said their hellos, we declare Supper Punch…. BEGUN! 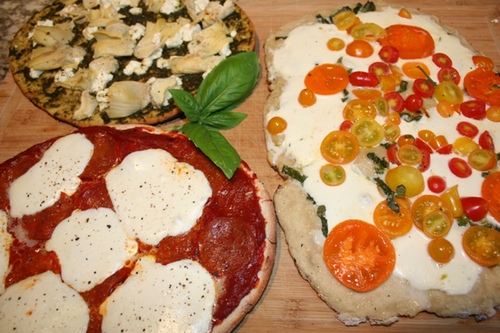 I have strange allergies which keep me from eating most restaurant or store-bought pizzas: gluten and oregano. And, because I love pizza so, I have decided I need to perfect a recipe at home. Two of these pizzas were done on Udi’s crust (bought from Ellwood Thompson’s) and one is done on a homemade crust. These pizzas were also grilled because that makes them taste yummy and it’s nice not to heat up your kitchen in the depths of summer. I’ve also found that my kids love to help make pizza (anytime they help make dinner they are more likely to eat it) and I can adapt each pizza to differing tastes.

Helpful tip when grilling pizza: put crust on grill top down to brown that side, then add toppings and grill again. 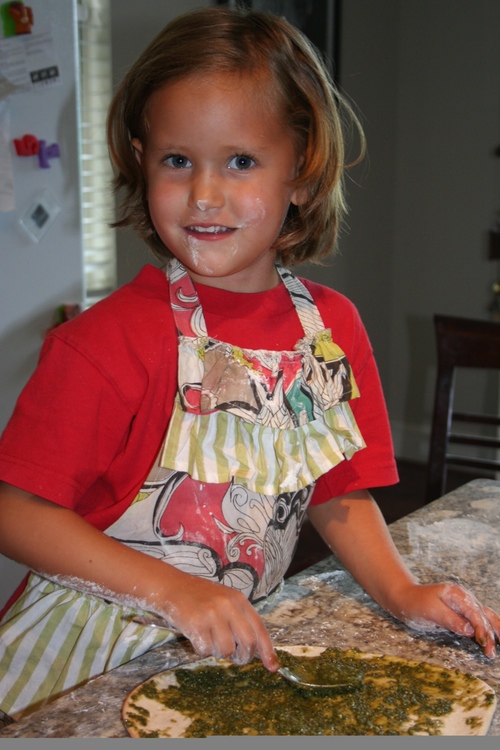 Time spent
25 to 45 minutes, depending on crust and level of “help” 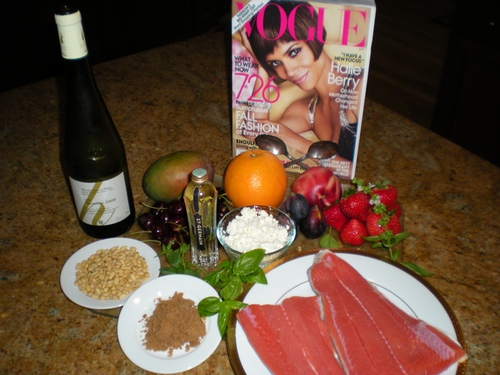 Nothing gets a girl excited like the massive September issue of Vogue waiting to be devoured. It was only fitting for me to gather some of my favorite edible things to celebrate my foray into 726 pages of fashion fantasy. For Sunday’s dinner menu, I gathered some of nature’s best in-season bounty, with a color palette sure to catch even Anna Wintour’s eye. 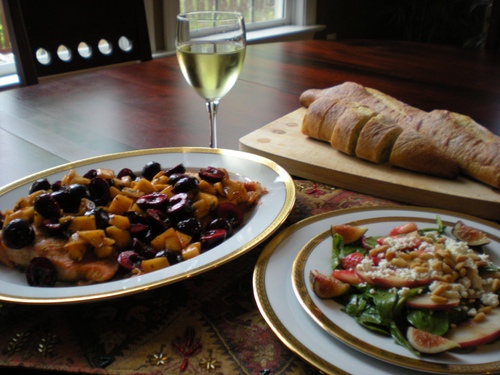 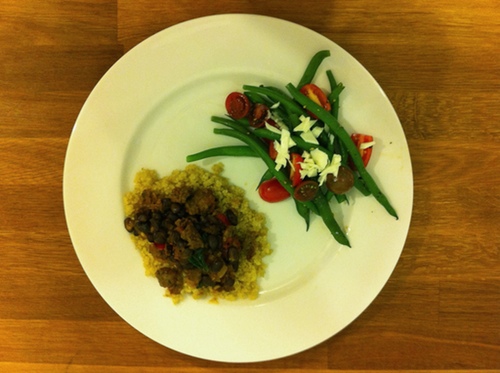 Most times when I’m making dinner I don’t really know where I am going to end up. I had some lamb and rosemary sausage that I needed to get rid of along with an assortment of vegetables/sundries. Armed with my cast iron pan, I began. I took the sausage out of the casing and pan fried it and set it aside. Next, I sauteed some diced onions and some of the poblano peppers (which were insanely hot — way more than they should have been) in the sausage fat, while boiling some tomatoes (so I could skin them). Then I added most of a can of (rinsed) black beans to the pan, chopped and added the tomato, tore up some basil, added a bit of water and let it cook for a while. Finally, I put the sausage back in and let it cook for a bit more. BAM. Something that turned out to be chili. Tasted great. 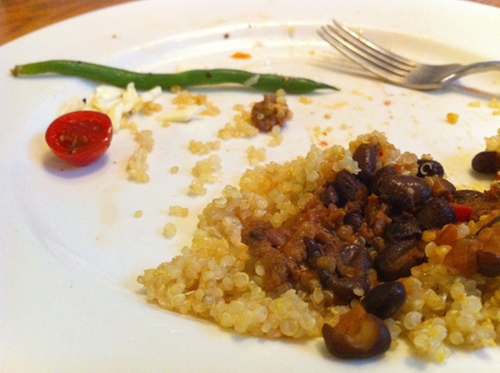 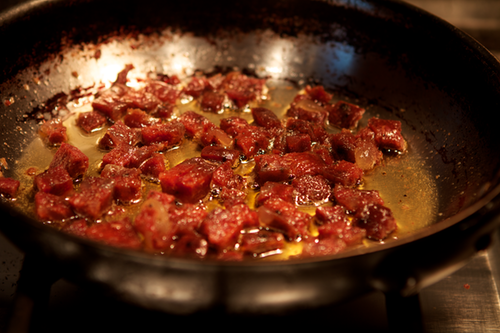 This week, I made home cured chorizo and potato tacos. The tacos were topped with homemade guacamole, a cilantro and apple cider slaw, a house pickled tomato salsa, and queso fresco. Our goal was to use the chorizo I have been curing along with some other ingredients, as many as possible local, to create a homage to Richmond’s own Nate’s Taco Truck. The chorizo started life as a pork butt from our friends at Mt. Run Farm in Bedford Co. I ground, cured and stuffed it, leaving the links to hang in my “salumeria” for nearly 4 weeks. After a slow rendering that crisped up the sausage and left a nice layer of spicy saffron-colored oil, the shredded potatoes went in. For the slaw, some garlic, sea salt and a hand full of cilantro met the mortar and pestle and came out as a smooth paste that joined some apple cider vinegar and more salt to create a crunchy cabbage. The tomatoes came from Victory Farms and spent 3 weeks in a brine becoming pickled with extreme prejudice. They were pureed into a “salsa” unlike any other. We served the end result to some friends who didn’t arrive in town in time for a trip to Nate’s. They were spicy, tangy, crunchy — a mouthful of awesome. 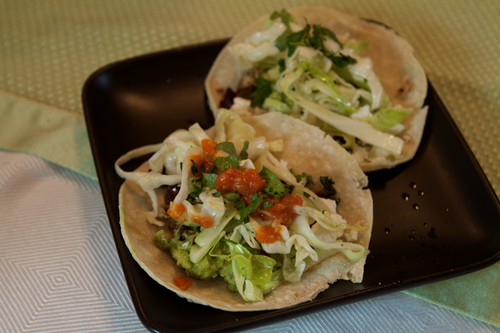