The May edition of the 2011 Hokie Storm Chase is starting to wind down, and we haven’t seen a tornado yet. Could today be the day?

CHAMPAIGN, Ill. – Yesterday’s chase in Nebraska gave us a brief taste of what we really wanted to get out of a Great Plains supercell. It wasn’t as glamorous as some previous ones.

Our morning analysis posed another forecast challenge today; specifically, the challenge posed by the Mississippi River. There’s fantastic terrain for chasing in eastern Iowa and northern and central Illinois; the trouble is that river crossings are limited and often centered around urban areas. If a chaser starts following a storm west of the river, a detour of 50 miles or more in places may be required in order to cross the river and catch back up with the storm. A lot can happen in 50 miles and, depending on the storm track, it may be impossible to catch the storm at all.

Our chase began in eastern Iowa, as storms fired earlier than expected, putting us in prime position about 20 miles west of Iowa City. We quickly caught our first supercell of the day, tracking northeast near Williamsburg. We played tag with it for a few minutes, trying to dodge heavy precipitation ahead of the storm and make sure that we wouldn’t get caught by any hail that might be falling closer to the core of the storm.

Our track took us to the western flank of the town of Marengo, Iowa. Chaser Amanda Weigel noticed a tightly rotating wall cloud out the back of the van as we moved ahead of the storm. We stopped and found a nice vantage point adjacent to a grocery store where we witnessed this: 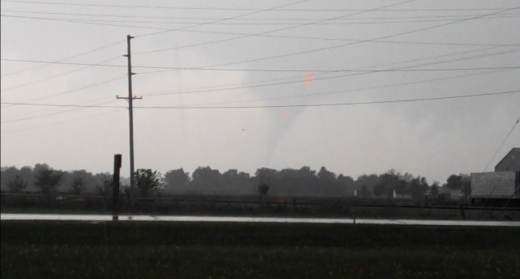 A storm survey performed on Monday by the National Weather Service office in Davenport, Iowa, rated the damage produced by this tornado as EF-2 on the Enhanced Fujita Scale.

The tornado was on the ground for only a couple minutes, but we got to witness the entire life span from funnel cloud to dissipation while heavy rain came down around us.

We weren’t able to stay in one place for long, as a large precipitation core was advancing on our position. Our ideal move would have been to move south and east of the advancing storm, so we could both stay ahead of the storm and out of the areas of strongest precipitation.

However, our route east was closed due to construction. We were forced to drop south towards the interstate and dodge another storm developing to the southwest of the original one, which was producing hail and had already produced a funnel cloud.

Traffic along the interstate in Iowa City was slowed due to construction; allowing the storm tailing us to catch up a bit more.

We collectively jumped in our seats as lighting struck a tree on the opposite side of the road near our van. Leader Chris White commented later on that he could feel the radiant heat from the lightning strike from his seat in the trailing van. 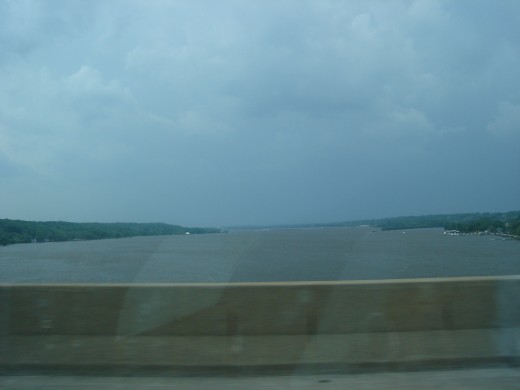 A view of the Mississippi River looking downstream from I-80 at Davenport, Iowa.

By this time, storms had developed in several lines, none of which were very convenient to chase. Things got complicated as we attempted to find routes to the east, then to discover that they were infact covered by the precipitation cores of storms as they crossed the road, blocking our progress east. After multiple route changes, loops, and stops to consult the radar and an atlas, we made the choice to head southward along I-74 to attempt to intercept two final supercells that had developed southwest of Peoria.

As daylight began to wane, so did our thunderstorms, and we broke off the chase. We caught a late dinner in a small town northeast of Peoria called Lacon, where we were the hit of the town. The gas station cashier made several calls to locals, letting them know that a group of chasers were in town. I didn’t witness it firsthand, but I’m told by other team members that were were a number of cars that cruised by the gas station to check out our vans.

Our slow trek east represents the winding-down of our trip. Tomorrow looks to be our last chase day in Indiana and Ohio, and we’ll roll back into Blacksburg.

Our fearless leader, Dave Carroll, has a tradition that started a few years ago: any chase trip that spots a tornado gets a steak dinner. We’re not going to get to enjoy our dinner until tomorrow night, but I can already taste it. 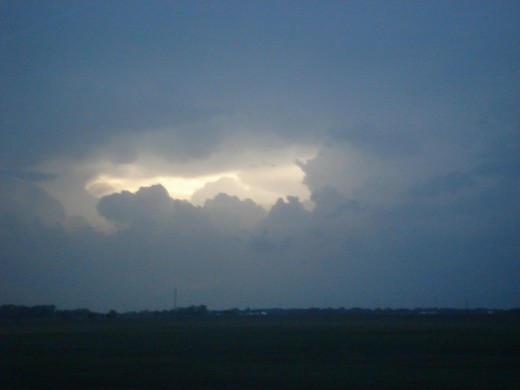 Towering cumulus are illuminated by the setting sun through a gap in some overhead cirrostratus clouds.