Star Trek Into Darkness: These are the voyages of a few dudes

Welcome to the 23rd century, where the universe is filled with beautiful action sequences, and women are worse off than they were in the 1990s. First you should know that I’m a completionist. I’ve seen every episode of every Star Trek series1 and each of the 12 Star Trek movies. But that doesn’t mean I’m a purist, by any means. I don’t think Kirk is the best captain, and I don’t even think Star Trek: The Next Generation is the best series.2 So when J.J. Abrams came along and rebooted the Star Trek timeline into what’s called the Alternate reality, I was cool with it.

How stressful it must be to work on a series that’s nearing its 50th birthday and is beloved by some of the most…particular…fans in the world. And what courage J.J. Abrams must have had when, in the previous movie, he blew up an entire planet and all but genocided one of the Big Three Species.3 Abrams took a big risk and moved the film (and probably the franchise) into a more interesting space. Star Trek Into Darkness, his newest addition to the universe, eschews risks for well made, beautifully designed action sequences. This may or may not appeal to you. 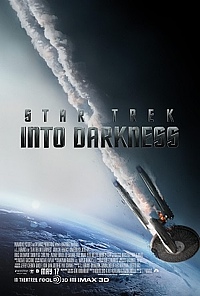 Things start out with Kirk (Chris Pine) and McCoy (Karl Urban) hightailing it through a beautiful red jungle (which is a truly fantastic set) while a horde of angry natives gives chase. Kirk makes jokes, McCoy frets, spears fly by–you feel like you’re back in an episode of The Original Series–but with about ten million times the production value. While Kirk is busy seriously violating the Prime Directive, back on earth, a mysterious terrorist (Benedict Cumberbatch) exploded half of downtown London. Starfleet strips Kirk of his command (for the aforementioned violation of basically the only rule he has to follow) and demotes him to Admiral Christopher Pike’s Number One. But then some stuff happens! Starfleet reverses all of the decisions made in the previous sentence and sends James T. Kirk out into space to hunt down Benedict Cumberbatch.

Don’t get me wrong, fellow Trek fans, Into Darkness’s action scenes are incredible. The explosions, the hand-to-hand combat, the humans sucked out into the vacuum of space, all of it is excellent watching–in fact I wish there was more of it to watch. I would have happily sat there for another couple of hours watching starships plummet from space while people merrily phase each other to death–I love great action movies, and that’s what Into Darkness is.

But don’t come to the theatre expecting a bold, new take on the Star Trek universe. It’s really the opposite. The film spends so much time pulling bits and pieces out from the canon and not-so-gently smearing them on your face, that there isn’t a whole lot of room for exploring what’s really interesting and what fans (at least this one) really want: the Alternate Reality. This is a universe filled with characters we know and love but one where things are vastly different and anything can happen. Sure a tribble reference here and a Red Shirts joke there is nice, but how much more interesting is whatever’s going on with New Vulcan?

While the Alternate Reality has changed a bunch of things, one thing has remained consistent: women still have no place in the 23rd century. And this is a huge bummer! The film’s two main female characters, Nyota Uruha and [SPOILER ALERT], serve as vehicles for Spock (Zachary Quinto) and Kirk, respectively, to display their studliness. Sure, a lot of what makes Kirk’s character work is an underlying current of misogyny–but that doesn’t mean women of the future need to sit there and take it (or literally strip off their clothes for him)! Teach him (and…the audience?) some dang lessons. And poor, poor Uruha, whose major scene is devoted entirely to nagging Spock about their relationship while on an away mission WITH THE CAPTAIN!

Trek fans! These are missed opportunities and a several steps back from the 90s when we had a bunch of strong female characters that weren’t constantly in danger, in need of saving, or whose only motivation was developing a romantic relationship with a man. We had a female captain, for pete’s sake! We should demand better!

Despite the harsh words in the preceding paragraph, Into Darkness really is a great action movie. The sets are incredible, the battle scenes are wonderful, even the 3D is used well. It just misses the mark (or several marks) for me.

Also, there is a mega twist that I successfully avoided spoiling for you.