Billed as “The day has finally come for all of Richmond’s younger party goers to express support for a plan to better Shockoe….” but where does the young party goers donation go?

Since this publishing of this article the broken Facebook & Twitter links on the Historic Shockoe Valley website have been corrected and in the case of “Foundation News” removed.

On the same day that the League of Women Voters of the Richmond Metropolitan Area are hosting a Guided Slave Trail Tour you can participate in a bar crawl being organized by Historic Shockoe Valley Foundation.

The event starts at 4:00 PM on Saturday, February 22nd and runs until 12:00 AM. There is a Facebook event set-up for the details. As for the event’s goal, read for yourself:

The day has finally come for all of Richmond’s younger party goers to express support for a plan to better Shockoe with a grocery store, hotel, apartments, heritage site, and ballpark. Let us show City Council just how much fun we can have in Shockoe, by coming out in droves!

There is also a secondary goal:

If you would like to show your support monetarily, bars will be accepting a suggested donation of $5. Stickers will be available from Loving RVA so you can rock your support for the plan by posting photos on Facebook (Loving RVA), Twitter (@LovingRVA), and Instagram (#LovingRVAbarCrawl)!

All donations go to the Historic Shockoe Valley Foundation which aims to both protect history and promote progress in Shockoe as well as independently educate the public on the positives set forth in this development plan that brings a grocery store, hotel, apartments, heritage site, and ballpark to Shockoe and allows for retail development on the Boulevard.

Historic Shockoe Valley Foundation — from checking the IRS page of non-profits and by it’s own commission (via Facebook) — is not yet an official 501(c)3:

The HSVF will first form its charter, board of directors, and incorporate as a non-profit organization. It will then file for it’s tax-exempt 501(c)3 status. It’s first order of business will be to secure the location known as the Adam Craig House as well as the parcel of undeveloped land adjacent to the Adam Craig House which is currently owned by Lovings Produce (herein referred to as the “Grass Lot”).

The point of contact for Historic Shockoe Valley Foundation is Matthew Davey of the The Davey Company. The Davey Company mission statement: “Provide consulting services to organizations and individuals on tourism concepts beneficial to the Richmond area, produce quality events in the community, and provide political campaign management services to those with progressive values.”

“Our mission is to protect history and promote Shockoe Bottom,” said Matthew Davey about the Historic Shockoe Valley Foundation. He said the new group, which expects to finalize its 501(c)3 status sometime next week, is committed to supporting “anything that’s going to make Shockoe Bottom a better place.”

Davey said the bar crawl was conceived as a way to “softly announce our formation as an organization.” He said that the Historic Shockoe Valley Foundation is in favor of Mayor Jones’s Shockoe revitalization plan that uses a new baseball stadium to spur economic development in the area. However, Davey said that Loving RVA, the lobbying group created by the Mayor and Venture Richmond to drum up public support for the plan, has neither funded the upcoming bar crawl nor the Historic Shockoe Valley Foundation despite the heavy Loving RVA branding you see above.

“We’re not in any way…putting it on,” said Rob Jones of the Alliance Group, a Richmond-based PR firm running Loving RVA. But Jones said that Loving RVA is eager to work with local organizations and groups that support the Mayor’s plan. Jones said Loving RVA is only providing the bar crawl with stickers, and not offering financial support, as a way to promote Loving RVA to a younger audience.

Historic Shockoe Valley Foundation is a new endeavor and the website reflects the soft opening mentioned above. Both the Facebook and Twitter link  under the Contact Us section link you to the respective WIX accounts. WIX provides templates for website creation. The link to the Foundation News section takes reader to placeholder text and photos. 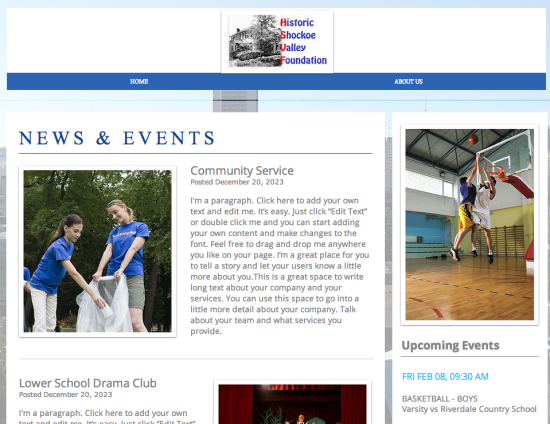 The $5 donation will definitely get “young partygoers” a sticker but whether that donation will go to “both protect history and promote progress in Shockoe as well as independently educate the public ” remains to be seen.