“Goodbye. You were a good toy harmonica.” I hate throwing things away. An old, worn-out pair of sandals walked with me for 10 years. Unused SilverHawks stickers take me back to playing action figures at the McIntoshs’. Christmas ornaments bring back intangible feelings of family and childhood. Throwing an object away makes feel like I am Bastian making a wish in The Neverending Story–one of my memories is lost forever.

I’ve gradually learned to let things go.1 My mother’s very welcome visits are often accompanied by the “bag of stuff” from her basement. It could be my old box collection,2 old comics, or a toy that I haven’t thought about in years. There’s not room in the house for everything so some things must be donated or sent to the landfill.

In order for me to actually throw away anything, I have to do a little ceremony. First, I take a picture of it. Then, I say words aloud like “Goodbye. You were a good toy harmonica.” Finally, I cry a couple tears and then put it in the trash/donate bag. If this sounds overly sentimental, it is. You can blame The Velveteen Rabbit.

My progress letting go accelerated dramatically when I had children. Not only was there dramatically less space for my physical memory totems, there was a massive influx of new stuff, each object a potential memory for my children. How do I decide what to keep?

The short answer is: I don’t know. Everything a kid makes is amazing, not in the context of the greater world, but in the context in which it was made. This drawing is the first time she drew a recognizable face, we have to keep it. We can’t throw away that box, we pretended it was a boat.

My daughters are six and three; I don’t have many memories of my life at those ages. Of the memories I do have, they are likely an amalgamation of actual events, stories I was told, old photographs, and objects kept. What artifacts do I provide my girls when they go on the archeological dig of where they came from?

You can’t keep everything, so some things go in an archive box, some into a give-away pile, some things into recycling. Now that the girls are somewhat old enough, we can give some of the choice to them. If they want to keep something, it needs to be ”put away” which typically means a box under their beds. I’ll sometimes pull out a few things to put into my private collection, but for the most part the girls decide for themselves.

Recycling night is armageddon. Class projects, crafts, paintings, worksheets, drawings, random sticks from the neighborhood, we can’t possibly keep them all. On the grumpier nights? Anything that is not put away is fair game. On other nights, perhaps a stack is made and left outside the girls’ bedroom door for later action.3

Giving old toys away is harder for me than it is for the kids. My wife, Kat, is far less sentimental than I am, and will guide the kids through making a keep pile and a giveaway pile.4 While the girls have had occasional spells of “I miss that toy,” they have a few minutes of sentiment, then get on with whatever they were doing. Most of the time, they are completely fine.

The oldest had a princess lunch box for her first year of school. By the time the summer came around, it smelled really bad–like “I dare you to smell this” bad. After vinegar sprays and two weeks in the sunshine failed to make a difference, it was apparent that the lunch box needed to go. I prepared for the worst, ready to help guide my child through letting go. When told that her lunch box would need to be thrown away, my eldest daughter’s response was simply, “OK.”

I brought it out to the Super Can, took a picture, told it that it was a good lunch box, and dropped it in. 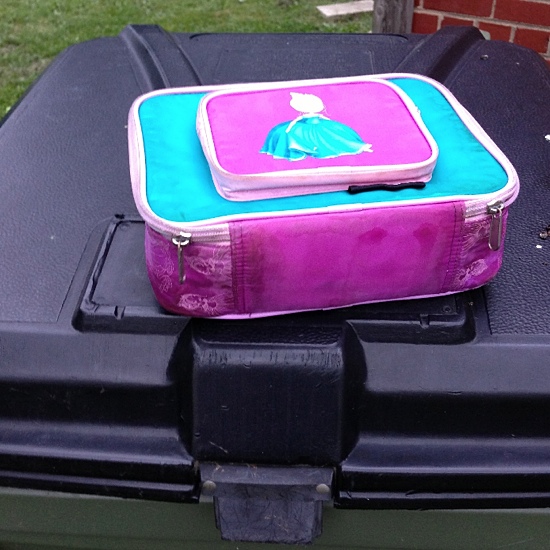